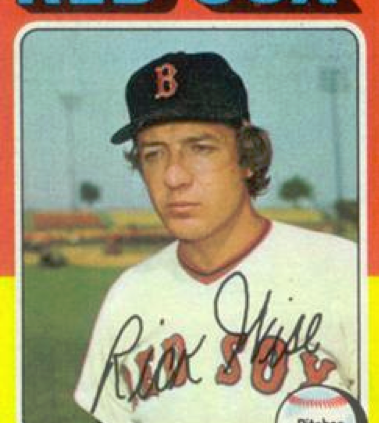 On Saturday, August 2, 1975, in the midst of a ferocious regional heat wave, the western Massachusetts town of Chester reported a temperature of 107 degrees. So did the city of New Bedford, on the state’s southern coast.1 As of January 2021, these readings remained the hottest officially recorded temperatures in the history of Massachusetts.2

Boston was a garden spot by comparison, peaking at a mere 102 degrees — a record for the date, but 2 degrees shy of the city’s all-time record, set on July 4, 1911.3 This was little comfort for the members of the Boston Red Sox and Detroit Tigers, who did battle in a 2 P.M. day game at Fenway Park as all of New England broiled under record-setting heat. Despite the uncomfortable and even potentially harmful weather, 27,1884 people flocked to Fenway to see if the Red Sox could wrest a fourth straight victory from Detroit. The Baseball-Reference game log shows a temperature of 102 degrees at the game’s start.

Manager Darrell Johnson’s Red Sox came into the game hot — in the competitive sense, as well as the climatological sense. Since July 7, when the team returned to Fenway Park from a seven-game Midwestern road trip, the Red Sox had won 20 games and lost only five. This stretch included a 10-game winning streak between July 7 and 19. The Red Sox, one game ahead of the Yankees and Brewers in the American League East on the morning of July 7, stood 8½ games ahead of the second-place Baltimore Orioles when play began on August 2. The Yankees were in third place, 10 games back, and the Brewers in fourth, 12½ games behind.

In the visitors dugout, Ralph Houk’s Tigers were skidding through a historically bad season, and the worst part of it was just beginning. At the end of July, the Tigers occupied last place in the AL East with a 46-59 record, 17 games out, but only two games behind fifth-place Cleveland. Beginning on August 1, the team went 11-43 over the rest of the year to finish 57-102, 37½ games out, with their lowest winning percentage since 1952.5

Boston’s starting lineup featured most of the team’s biggest offensive weapons, including first baseman Carl Yastrzemski; Carlton Fisk, starting at designated hitter as a break from catching; third baseman Rico Petrocelli; and the “Gold Dust Twins,” power-hitting rookies Jim Rice in left field and Fred Lynn in center. Bernie Carbo, later to become a pinch-hitting hero in that year’s World Series, started in right field in place of Dwight Evans, and second-year man Tim Blackwell started behind the plate. Johnson gave the start to veteran righty Rick Wise, who was on his way to winning a career-high 19 games. Wise came into the game with a 13-6 record and a 4.36 ERA, including a 2-1 record that year against the Tigers.

Houk’s lineup mixed veterans like designated hitter Willie Horton, catcher Bill Freehan, and third baseman Aurelio Rodriguez with young players like center fielder Ron LeFlore and right fielder Leon Roberts. Ben Oglivie, who played for the Red Sox from 1971 to 1973, started in left field for Detroit. On the mound was Michigan native Vern Ruhle, a righty playing his first full season in the major leagues after a brief tryout with the Tigers in 1974. Ruhle brought a 9-7 record and a 3.33 ERA into the start. He’d pitched twice against Boston early in the season — one start, one relief appearance — with no record against the Red Sox.

Detroit threatened in the top of the first as Oglivie singled and stole second, but Horton grounded out to end the inning. The Red Sox took a 1-0 lead in the bottom half on one-out singles by second baseman Denny Doyle — extending his hitting streak to 20 games6 — and Yastrzemski, followed by a run-scoring double from Lynn. Ruhle intentionally walked Rice to load the bases. The gamble paid off as Fisk struck out and Petrocelli grounded into a force play.

The Tigers got on the board in the second, but Doyle minimized the damage. He began the inning with two excellent defensive plays, throwing out Freehan on a slow roller and snagging a low line drive by Rodriguez. The third hitter, first baseman Jack Pierce, lined a home run to right field to tie the score at 1-1. The Tigers would have taken the lead if Doyle had not kept Freehan and Rodriguez off the basepaths.7 The round-tripper was Pierce’s eighth and final homer of 1975, and also the last of his three-season career. Meanwhile, the Red Sox collected a double, a single, and a walk in the bottom of the inning, but failed to score.

With two out in the third, Detroit pulled ahead 2-1 on a home run by second baseman Gary Sutherland — the fifth of a career-high six homers he hit in 1975.

It took the Red Sox until the fourth inning to respond, but when they did, they put the game away. Petrocelli singled and took second on a groundout. Ruhle hit Blackwell with a pitch. Carbo tied the game with a single to center field to score Petrocelli. Doyle collected his third straight hit, a single, to score Blackwell for a 3-2 Boston lead.

Yastrzemski followed with a double, bringing home Carbo and Doyle as right fielder Roberts bobbled the ball.8 Right-handed rookie Fernando Arroyo, making his sixth big-league appearance, spelled Ruhle, and Lynn greeted him with a single that scored Yastrzemski for a 6-2 lead. Lynn’s two RBIs in the game gave him a league-leading 79.9

Boston tacked on one last run in the seventh off Arroyo, who stayed in the game the rest of the way. Rice reached base when Sutherland misplayed his grounder and scored when Petrocelli laced a double over LeFlore’s head into Fenway Park’s center-field triangle.10

Wise, who hadn’t walked a batter through the first seven innings, handed free passes to LeFlore and Sutherland with one out in the eighth. Johnson brought in reliever Dick Drago, who hadn’t pitched in three weeks because of a sore shoulder.11 Drago got Oglivie to fly out to right.

The next hitter, Horton, hit a checked-swing bouncer past the mound that was bobbled first by Drago, then by Doyle. Horton hadn’t bothered to run it out, though, and Doyle was able to throw him out by a wide margin once he got a handle on the ball. After the game, Houk said he would not punish Horton for his apparent lack of effort: “Horton has bad legs. He’s played every game for us, gone to bat in every situation. I wouldn’t think of fining a guy like Horton. I know how hard he tries.”12

Boston filled the bases on two singles and a walk in the eighth, but Lynn grounded into a double play to end the inning. The Tigers did the same against Drago in the ninth on a walk to Freehan, a single by Rodriguez, and a one-out single by Roberts. Houk sent Gates Brown to pinch-hit for shortstop Gene Michael. Brown had been one of the AL’s top pinch-hitters in previous seasons, and retired at the end of the 1975 season as the league’s all-time leader in pinch hits, pinch-hit at-bats, and pinch-hit home runs.13 But he couldn’t come through against Drago, grounding to Doyle for a 4-6-3 double play.

The twin killing ended the game in 2 hours and 38 minutes, sending the fans streaming back to their floor fans, cold lemonade, swimming pools, fire hydrants, or anything else that might cool them down. (Boston firefighters stopped turning off open hydrants that day after a crowd in the Jamaica Plain neighborhood pelted them with stones.)14

Wise told reporters he lost nine pounds during his 100-pitch outing, and a Boston Globe reporter said he looked “quite drawn after his affair in the sun.”15 The Detroit Free Press noted that the Tigers dugout “felt more like the inside of a blast furnace than a resting place for fatigued athletes,” adding that the heat “became more and more unbearable” as the game went on. The paper also mentioned that Detroit had lost eight straight games to Boston and had yet to win at Fenway Park that year.16 The Red Sox, meanwhile, reached 23 games above .500 for the first time since September 1951.17

Boston could not maintain its torrid pace the rest of the way but still won the American League East with a 95-65 record, 4½ games ahead of Baltimore, before sweeping Oakland in the League Championship Series. A later rematch of the Tigers and Red Sox had a big impact on the postseason, though. One week before the end of the regular season, on September 21 at Tiger Stadium, Ruhle hit Rice with a pitch, breaking his hand. The loss of one of Boston’s biggest bats may have been a factor in the team’s eventual World Series defeat in seven games against Cincinnati.

In addition to the sources cited in the Notes, the author used Baseball-Reference.com and Retrosheet.org for general player, team, and season data and the box scores for this game.

Image of 1975 Topps card #56 downloaded from the Trading Card Database.

1 Chester is about 114 miles from Boston, while New Bedford is about 60. New Bedford was also the hometown of the R&B family singing group Tavares, whose biggest hit, “It Only Takes a Minute,” broke into the American Top 40 countdown three weeks after this game was played.

4 Baseball-Reference and Retrosheet give the attendance as 27,188. Game stories in the Boston Globe and Lowell (Massachusetts) Sun both listed a slightly lower gate of 27,136.

12 Houk quote from Keane; additional color on the play from Scoggins.

16 Hawkins. Detroit ended the season with a 5-13 record against Boston, including a 1-8 mark at Fenway Park.