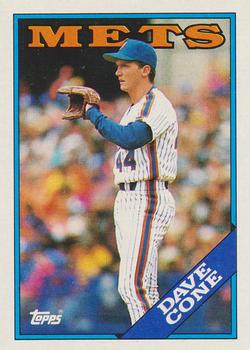 David Cone took advantage of an injury to Rick Aguilera to get into the Mets’ starting rotation in 1988. He pitched a shutout in his first start and finished May with a 7-0 record. That left little doubt that New York’s high hopes for the 25-year-old right-hander were warranted. Joseph Durso of the New York Times wrote that Cone “stymies hitters with a full deck: a strikeout fastball, a split-fingered fastball (forkball), a sharp curve and slider and a change.”1 Cone almost pitched a no-hitter on June 19 when he held the Phillies hitless for 7⅔ innings. When he took the mound against the San Diego Padres on August 29, his record was 13-3 and he had a 2.37 ERA.

Gregg Jefferies was also considered to be a crucial to the Mets’ future. Jefferies was a first-round selection in 1985. In his second and third seasons in the minors, Baseball America chose him as the player of the year. Bobby Floyd, his manager at Class A Lynchburg, said, “Mickey Mantle is the only one who has come along with that kind of power from both sides.”2 The Mets had brought him up briefly in 1987 but decided to give him some Double-A experience in 1988. The 21-year-old switch-hitter did well enough to earn a call-up on August 28 and Jefferies had gone 2-for-5 against San Francisco in that game, earning him his second start in as many days.

Although there were rumors that some of the Mets veterans were unhappy with Jefferies’ presence, the youngster just shrugged it off, saying, “What can I do? I don’t want to make enemies.”3 Mets manager Davey Johnson was pleased with Jefferies’ efforts, telling reporters, “This kid is creating some problems for me, pleasant problems but problems nonetheless.”4

Rain threatened to cancel the game and just 16,444 fans showed up at Shea Stadium with their umbrellas. The rain began to slow up around 7 P.M. and umpires announced that the game would start at 7:45, 10 minutes late. At 7:45 Cone had delayed warming up due to the rain and so he was not ready. After another 10 minutes, he jogged out to the mound.

Padres manager Jack McKeon immediately marched out of the dugout to speak with the umpires and lodge a protest. “Two or three minutes before the game, the umpires told us we weren’t starting because the Mets guys weren’t ready yet. Now what kind of reason is that?” he complained. “Just because their guy didn’t want to throw in the rain?” McKeon continued to share his frustration after the game, saying “[Tomorrow] I’m going to hold up the game because one of my guys needs a shoe repair. … He’s going to wait to wait to get his shoes done. And then we’ll start the game.”5

It looked briefly as though Cone might not make it past the first batter when Stan Jefferson lined one back up the middle. Cone was unable to move fast enough and the ball slammed into his right shin and over to Keith Hernandez at first for the putout. Later Cone pointed out the bruise on his leg, noting that “[t]hey hit a lot of balls hard tonight. I’ve got proof of that.”6 He ended up retiring the side in order in the first.

The Padres had a chance to score in the second. Keith Moreland led off with a walk. He was forced at second on Benito Santiago’s grounder. Santiago stole second and reached third when catcher Gary Carter’s throw was off the mark. But Tim Flannery’s lineout left Santiago stranded on third.

The game had another brief delay in the bottom of the second when Lenny Dykstra was ejected after arguing a called third strike. But that did not slow Cone down as he notched two more strikeouts in the third, retiring San Diego in order again. With one out in the fourth, Tony Gwynn, leading the league in batting average at .322, slapped Cone’s split-fingered fastball just inside the first-base line, barely out of reach of Gold Glover Hernandez. Gwynn ended up on second and it would turn out to be the only Padres hit of the night.

Gwynn said afterward that he thought it was going to be a groundout. “A great pitch. Inside and down, I just one-handed it and nobody was there.”7 Cone said of the pitch, “I have no regrets about Gwynn. He missed a fastball. He took a forkball for a strike. I threw another forkball, down and away, exactly where I wanted, and he just hit it over first base.”8

As Cone shut down the Padres for the rest of the game, his teammates provided him with plenty of offensive support. Jefferies, batting second, hit a double into the gap in left-center in the first. He came home on Darryl Strawberry’s two-out single, giving the Mets their first run, the only one Cone would need.

Jefferies struck again in the fourth. Leading off, he hit Padres right-hander Eric Show’s third pitch over the center-field wall for his first major-league home run. A double by Strawberry and a single by Carter brought home another run and the Mets now led 3-0.

Hernandez’s eighth home run of the season added another run in the fifth. The Mets’ final two runs came in the sixth, this time against Dave Leiper. Lee Mazzilli led off with a single. He stole second, reached third on a groundout, and came home on Mookie Wilson’s single. Wilson crossed the plate three pitches later when Jefferies tripled to left field. The Mets now led 6-0.

Jefferies’s chance to hit for the was spoiled in the eighth when Wilson struck out to close the frame. Jefferies said later that “I’d be lying if I said I wasn’t thinking about hitting for the cycle. But I think that I did everything that I could. I’m just trying to do my job.”9

After the game, Gwynn said of Jefferies, “The guy must be Superman. He swings the bat like he’s been in the league for eight years. With the tools that Jefferies has, I can see why everyone’s after him.”10

While his teammates continued to add runs, Cone mowed down the Padres. He retired the side in order the last three innings, throwing just 26 pitches. Cone finished the game with eight strikeouts as he faced 30 batters. The victory was Cone’s third shutout of the season and lowered his ERA to 2.25. It was the 17th Mets’ one-hitter.

The New York press crowed about Jefferies and Cone with headlines like “Youth Serves Mets” from the New York Times. Durso began his Times story with “The next generation of Mets stole the show with arms, bats and outrageous performances last night in Shea Stadium.”11

When asked about the Mets’ “youth” performances, Padres manager McKeon said, “Cone deserves all the credit for injecting life into the Mets. Cone shut us down tonight. It didn’t matter what anyone else did.”12 As for Jefferies, McKeon said, “A good game, but just one night. Anybody can do it in one game. We had a guy [Mark Parent] who hit two homers in one game. Time will tell.”13

The Mets’ youth continued to perform through the final month of the season. Cone finished with 213 strikeouts and a 20-3 record for the highest winning percentage in the National League. He ended up third in the voting for the Cy Young Award.

As for Jefferies, he mostly played third base for the Mets through the rest of the season. He finished with a .321 batting average, 6 home runs and 17 RBIs. That was good enough to land him a place in the starting lineup the following year where he continued to produce. His offensive numbers (.258/.314/.392) along with his .975 fielding percentage placed him third in the running for Rookie-of-the-Year honors.

But these two young Mets stars would not bring more championships to New York. As the team slid further into the cellar of the National League, both Cone and Jefferies would be gone in a few years. Jefferies remained in the Mets lineup until the team traded him along with Kevin McReynolds and Keith Miller to Kansas City for Bret Saberhagen and Bill Pecota after their disappointing 1991 season. Cone remained one of the Mets starters until he was traded to Toronto for Jeff Kent and Ryan Thompson at the end of the Mets disastrous 1992 season.14

In addition to the sources cited in the Notes, the author used the Baseball-Reference.com and Retrosheet.org websites for box score, player, team, and season pages, pitching and batting game logs, and other pertinent material.

14 Cone returned to the Mets in 2003 at the age of 40. He made four starts for New York, earning his 194th win on April 4 when he pitched five shutout innings. But after struggling through the rest of April and May, Cone announced his retirement on May 30, saying, “I’ve had problems with my hip and I’ve always been able to manage it, but it became unmanageable. After all the years, I thought it would be my arm. I never thought it would be the hip. [But] that first start back was magical. That gave me hope. If that’s all I got (from this season), it was worth it.” United Press International, “David Cone Announces Retirement,” May 30, 2003, http://upi.com/David-Cone-announces-retirement/76971054333945/.