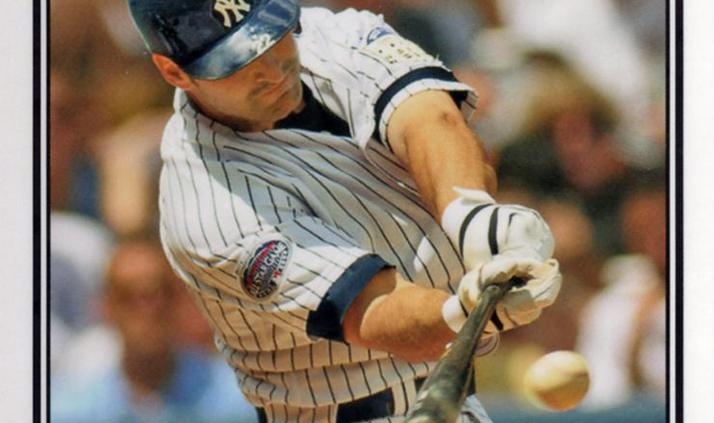 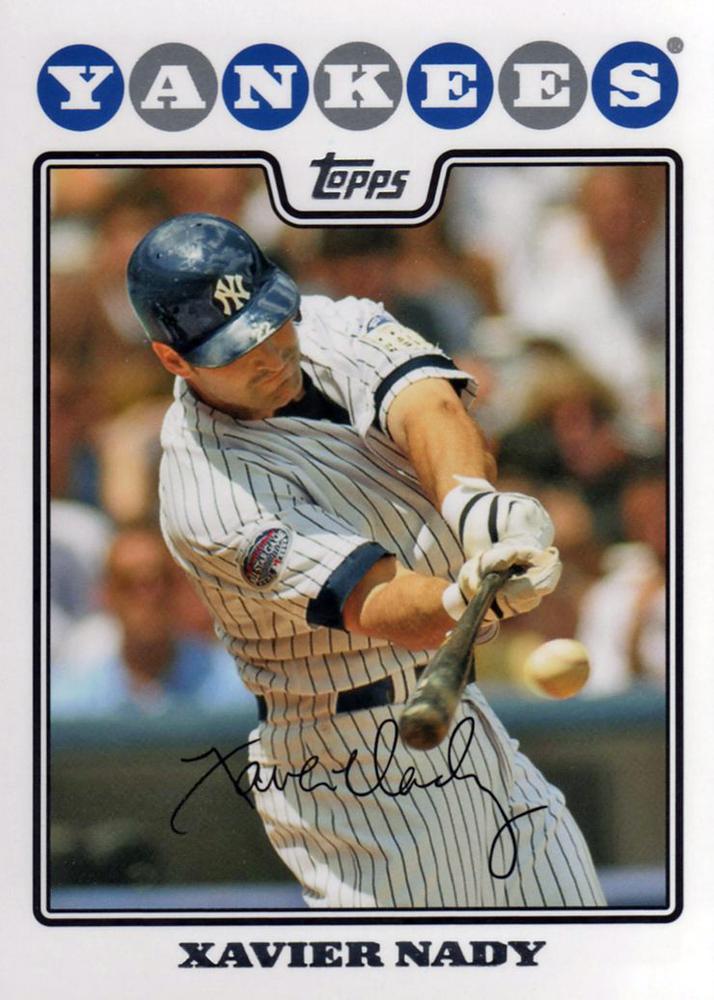 In the midst of a career year with the Pittsburgh Pirates in 2008, 29-year-old Xavier Nady was hitting .330 with 13 home runs and 57 RBIs in 89 games when he was dealt to the New York Yankees, along with Damaso Marte, for four players1 on July 26.

Nady’s arrival at his new home field of Yankee Stadium on July 28 for a six-game homestand sent him on a tear;2 he hit .526 (10-for-19) during the homestand. He capped his surge on August 3 with four hits and a career-high six RBIs against the Los Angeles Angels on a sunny Sunday afternoon in front of a crowd of 54,204.

Los Angeles entered the game with the majors’ best record at 69-42 and an 11½-game lead over Texas in the AL West. The Yankees were 61-50 and in third place in the AL East, 5½ games behind Tampa Bay.

The Angels had taken two of the first three games in the series. With a victory in the final game, they would end their road trip at 8-2, the best 10-game trip in franchise history.3

The Angels struck for two runs in the first inning.5 Chone Figgins lined a single to right on the game’s second pitch and Erick Aybar drew a four-pitch walk. After they advanced on Mark Teixeira’s groundout, Garrett Anderson singled down the right-field line to score both.6

Los Angeles added another run in the second. Reggie Willits, making his first start since June 18 – manager Mike Scioscia had given Vladimir Guerrero the day off after playing 31 consecutive games – walked and went to third on Figgins’ double to left-center. He scored when Aybar reached on an infield single to first. Los Angeles’ lead was 3-0.

Lackey cruised through the first three innings. After allowing a single to leadoff batter Johnny Damon, he faced just nine more batters, including Nady, who singled but was erased in a double play.

The Angels added on in the fourth. Willits drew a two-out walk. Figgins singled him to second, and Aybar drove both home with a double to right field.

With a 5-0 lead, Lackey ran into trouble in the fourth but was bailed out by a Yankees baserunning blunder. Derek Jeter led off with Lackey’s first walk of the day. Bobby Abreu followed with a single to center.

One out later, Jason Giambi walked to load the bases. When Nady lifted a fly to Anderson in left, Jeter tagged up. But Abreu also tried to advance and was thrown out at third to end the inning just before Jeter reached the plate – depriving the Yankees of a run and Nady of an RBI.

The Yankees finally scored in the fifth when another recent pickup, Ivan Rodriguez,8 hammered a homer just inside the left-field foul pole. It was the first of just two home runs (and one of three RBIs) that the 36-year-old Rodriguez had with the Yankees in 96 at-bats before signing with Houston as a free agent after the season.

Jeter and Abreu started the sixth with singles; Alex Rodriguez9 walked to fill the bases. One out later, Nady slammed a two-run double to deep right. He lost a potential third RBI because Rodriguez had to stop at third base when the ball bounced into the stands for a ground-rule double.10

Wilson Betemit’s grounder to second brought in Rodriguez, but Lackey escaped with a 5-4 lead by getting Melky Cabrera on a swinging strikeout.

Jose Arredondo replaced Lackey in the seventh. With one out, Jeter launched a drive to left-center where Gary Mathews Jr. – filling in for seven-time Gold Glove winner Torii Hunter, who was attending his grandmother’s funeral in Arkansas – attempted a running catch but dropped it for a two-base error.

“I had a pretty good bead on it,” said Mathews. “It’s a play I’ve made so many times. I just didn’t come up with it. I know bright sky and all the stuff, but I didn’t make it.”11

Abreu singled to tie the game.12 After Rodriguez singled, Giambi flied to left for the second out.

But Nady hammered a three-run home run into the left-field stands to give the Yankees an 8-5 lead. The Yankees had scored four runs, all unearned.

Unaccustomed to Yankee Stadium curtain calls, Nady didn’t realize the fans were still cheering for him when he returned to the dugout after his tiebreaking homer. “Then someone said ‘They want you’ and pushed me out,” he said later.13

Yankees manager Joe Girardi liked what he saw: “It took him a couple days to adjust but he’s had a great week for us. That’s why we went out and got him.”14

In the eighth, Edwar Ramirez came in to pitch for New York.15 He replaced Dan Giese, who had held the Angels to one hit in three innings after taking over for Rasner.

Ramirez retired Mathews and Jeff Mathis on swinging strikeouts before Willits drew his fourth walk of the game.16 Figgins singled for his fourth hit, and Aybar walked to load the bases.17

On a 1-and-0 pitch, Teixeira connected for a grand slam down the right-field line to give the Angels a 9-8 lead.18 It was his first homer since being acquired from the Atlanta Braves on July 29.

“That was big, especially since I didn’t come through earlier in the game,” Teixeira said later. “I was beating myself up because I missed a few pitches I should have hit. I wanted one more shot, and I got it in the eighth.”19

Scot Shields came in to pitch the eighth. After Ivan Rodriguez led off with a single, Justin Christian pinch-ran when the count on Cabrera reached 3-and-2. On the next pitch, Christian broke for second and shortstop Aybar moved to cover the bag. Cabrera hit a chopper to the left of the bag that Aybar misplayed for an error.

On the next pitch, the Yankees executed a double steal. Mathis’s throw to the left side of third base got by Figgins, who was retreating to the bag after playing in for a possible bunt. Christian scored on the error and Cabrera went to third. The game was tied, 9-9.

“I’d say that’s a tough play for a third baseman to get back and cover,” said Christian afterward. “You do it on the first pitch, you kind of catch them by surprise.”20

After Damon walked and Jeter grounded out, Abreu walked to load the bases. Rodriguez reached when Figgins bobbled a potential inning-ending double-play ball for the Angels’ third error of the inning. Cabrera scored on the play to give the Yankees a 10-9 lead.

With the bases full, Darren Oliver replaced Shields and allowed a two-run single to Robinson Cano, who had entered the game in the eighth inning. Nady followed with his final hit and RBI, a single to third that scored Rodriguez, pushing New York’s advantage to 13-9.

After Oliver struck out Richie Sexson, Christian plated Cano with a single to left for the final run. The Yankees had rallied for six runs, all unearned.

Jose Veras closed out the game for New York, giving up just a one-out double to Juan Rivera.

The Yankees had scored 10 unearned runs21 at home for the first time since the second game of a doubleheader on July 13, 1940, against the St. Louis Browns.22 The 10 unearned runs allowed by the Angels matched their franchise record, set on May 31, 1978, against the White Sox.23.

Ironically, before the game Yankee manager Girardi had praised the Angels, saying they “play the game the way you’re supposed to play. They do a lot of things right. They don’t beat themselves.”24

Despite the Angels committing 33 errors in their last 38 games, manager Mike Scioscia remarked after the game, “Defense is an asset on this club. We’re confident they’re going to make the plays to support our pitching. Today we didn’t get it done. We played a poor game. You have to turn the page.”25

Nady hit just .268 in 59 games with New York after the trade but finished the year with career highs in homers (25) and RBIs (97). He suffered an arm injury seven games into the following season; he eventually required season-ending Tommy John surgery and missed the Yankees’ World Series victory over Philadelphia. After recovering, Nady bounced around the majors, playing for five teams before his career ended in 2014. He finished his 12-year career with 104 home runs and 410 RBIs – almost one-quarter of which came in his 2008 season.

The author attended this game with his family during a vacation to New York City. The trip also included a tour of Yankee Stadium and a game at Shea Stadium between the San Diego Padres and New York Mets.

The author also consulted a YES Network recording of the broadcast of the game that he has on a compact disc.

2 In Nady’s first two games with New York he was 0-for-7 as the Yankees split a pair of games at Fenway Park.

4 Rasner had only won one of his previous six starts. After this game, he would appear in nine more games, including five starts, compiling a 5.87 ERA in 30⅔ innings. After the season the Yankees sold Rasner to the Tohoku Rakuten Golden Eagles of the Nippon Professional Baseball League in Japan. He never appeared in the major leagues again.

5 According to the YES television broadcast of the game, the Angels were 49-6 when scoring first.

8 Ivan Rodriguez had been acquired from Detroit on July 30 for Kyle Farnworth.

10 Had the ball not bounced out of play, Nady would have had a triple and possibly an inside-the-park grand slam. The ball was lined into the right-center-field gap where Angels right fielder Willits slid on the warning track in attempting to make the catch. Trailing the play, center fielder Matthews was forced to leap over Willits and clipped him as he did. Matthews stumbled and fell at the base of the center-field wall as the ball bounced into the stands.

15 Since allowing a single on June 30, Ramirez had faced 39 batters, allowing no hits and just three walks.

16 Willits entered this game batting .185 in 65 at-bats in 53 games. In this game he walked four times in four plate appearances and scored three times.

17 Aybar was down in the count 0-and-2 but battled back for a walk. He entered the game with eight walks in 252 plate appearances. In this game he walked twice in five trips to the plate.

21 In the box score, the composite totals for all pitchers does not equal the 10 team earned runs due to the provisions of Section 10.16 (i) of the scoring rules (where runs may be earned for a reliever but not for the team).