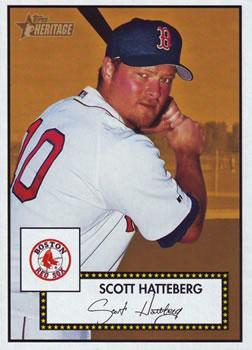 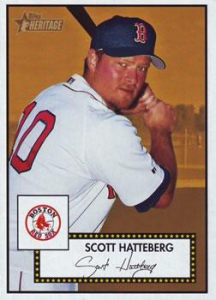 Boston Red Sox catcher Scott Hatteberg had himself quite a night on Monday, August 6, at Fenway Park in 2001. With two men on base and no outs in the fourth, he ended a potential rally by hitting into a triple play. The next time up, however, Hatteberg hit a grand slam, providing the runs that ultimately made the difference in winning the game.

The two teams held significantly different positions in the standings coming into the game. The Texas Rangers were on their second manager of the season in Jerry Narron, who had replaced Johnny Oates in May and were 31 games behind the first-place Seattle Mariners, in last place in the American League West. The Red Sox were just 3½ games behind the New York Yankees in the AL East. The Red Sox were led by Jimy Williams.1

Hideo Nomo was Williams’s choice to start for Boston. It was the 32-year-old right-hander’s first year with the team after signing as a free agent, and he’d kicked the season off with a no-hitter in Baltimore in his first start. He was 11-5 (3.90) before this game.

The Rangers’ starter was another righty, Rob Bell. He had come from the Cincinnati Reds in a June 15 trade. Though he had been 0-5 for the Reds at the time of the trade, he was 4-1 for the Rangers.

Both starters gave up two runs in the first inning. Nomo struck out three Rangers, all swinging, but DH Frank Catalanotto had led off with a single and shortstop Álex Rodríguez—batting third in his first season after signing a record 10-year, $252 million free-agent contract with Texas—had homered over the left-field wall.

The Red Sox wasted no time matching the Rangers with two runs on three consecutive hits in the bottom of the first—a leadoff single to right field by second baseman Jose Offerman followed by back-to-back doubles, to left-center by right fielder Trot Nixon and to right by shortstop Nomar Garciaparra. Bell then buckled down and retired the next three Red Sox in order.

Nomo struck out two more Rangers in the second inning after a fly ball to center. In the bottom of the inning, third baseman Chris Stynes doubled for Boston in between strikeouts of first baseman Brian Daubach and catcher Hatteberg. Offerman grounded out to strand Stynes.

The only scoring in the third came on a two-run homer by Boston left fielder Manny Ramírez, scoring Garciaparra, who had singled. Like A-Rod’s, Ramirez’s drive went over everything in left field. It was 4-2, Red Sox.

Nomo struggled in the top of the fourth with a walk, a single, and then—with two outs—a double steal. But no scoring resulted.

The Red Sox threatened to expand the lead in their half of the fourth. After Bell walked Daubach to start the inning, Stynes’ single to left put runners on first and second for Hatteberg.

Batting with a full count, Hatteberg lined to A-Rod at short. Both runners had been off with the pitch. A-Rod made a routine catch and flipped underhanded to Randy Velarde about 20 feet away at second base. Velarde doubled off Daubach, then applied the tag to the incoming Stynes for a triple play.2

After the game, Hatteberg said, “We’re looking for runs, so I just killed that inning, and it really can take the wind out of a team’s sails.”3

It wasn’t his fault. He had hit to the opposite field, but A-Rod was well positioned, and the triple play was simply bad luck for Boston, the two baserunners, running with the pitch, accounting for two of the three outs.

“That’s the gamble you take,” said Hatteberg. “No outs and send the runners. You’re thinking the guy’s going to make contact, and I did. That’s the downside of putting guys in motion with less than two outs.”4

Soon after the triple play got them out of the jam, the Rangers surged ahead in the fifth. Catalanotto singled again, his third single of the game. Álex Rodríguez walked one out later, then—with first baseman Rafael Palmeiro at the plate—both runners executed a double steal. They were the fourth and fifth stolen bases the Rangers had pulled off against the Nomo/Hatteberg battery.

After Palmeiro struck out, Catcher Iván Rodríguez walked, loading the bases. Left-hander Bill Pulsipher relieved Nomo, who had torn a callus on his right thumb. His first batter, lefty-swinging right fielder Ricky Ledee, had capped an ALCS win for the New York Yankees at Fenway Park with a pinch-hit grand slam in 1999. Now Ledee cleared the bases with a double to left-center, giving the Rangers a 5-4 lead.

In that inning center fielder Carl Everett reached on an infield single against Bell. Narron had Juan Moreno relieve his starter. A lefty from Venezuela in his first year in the majors, Moreno was 2-1 with a 2.70 ERA, appearing in his 27th game.

The DH, Troy O’Leary, singled up the middle, Everett stopping at second. Moreno’s first pitch to Daubach was a wild pitch (both baserunners moving up 90 feet); he threw three more balls and the bases were loaded. Stynes singled, bringing Boston to within a run, 7-6.

Scott Hatteberg came to bat—with the bases loaded and nobody out, an inning after coming into the same situation and hitting into a triple play. Moreno remained in the game for the lefty-lefty matchup. This time, Hatteberg turned the game around, hitting the fourth pitch he faced (a 2-and-1 count) for a grand slam into the Red Sox bullpen in right-center. The Red Sox took a 10-7 lead.

It was as though Hatteberg had been “dropped into the set of a Disney movie.”5 Manny Ramirez had to push Hatteberg—who had started strapping on his catcher’s gear—up the dugout steps to take a curtain call for the appreciative crowd. “I’m not used to that,” Hatteberg said after the game.6

With the bases cleared, Moreno struck out Offerman and got Nixon to fly out to center. Pat Mahomes took over for Moreno and got Nomar to fly out to center. Mahomes—father of the NFL quarterback of the same name—pitched the rest of the game for Texas, allowing just one walk and one single (to Daubach) in 2⅓ innings.

Fossum got his first major-league win. He was relieved by Rod Beck and then Derek Lowe, who earned a hold and a save respectively. A single by Iván Rodríguez in the top of the ninth was the only other base hit of the game by the Rangers. The game had lasted 3:16 and was no doubt appreciated by most of the sold-out home crowd of 33,977. The win completed a four-game sweep at Fenway from the visiting Rangers, the first time since 1975 that Boston had swept four from Texas.7

The story of the game, though, was—of course—Hatteberg, who had hit into a triple play in one at-bat, and then hit a game-winning grand slam in his next at-bat. It was only the second home run he’d ever hit off a left-hander.8 Hatteberg said, “That’s from the outhouse to the penthouse right here.”9

In addition to the sources cited in the Notes, the author consulted Baseball-Reference, and Retrosheet.org.

Thanks to John Fredland for supplying YouTube links that show the Hatteberg triple play: https://youtu.be/J7g3dt0ad9o and grand slam: https://www.youtube.com/watch?v=RGkmkSRoo3A

1 Less than two weeks later, on August 16, Joe Kerrigan replaced Williams as Red Sox manager. Boston had been in first place throughout June but the team was 14-17 after the All-Star break. The Sox continued to slip and finished in second place, but 13½ games behind the Yankees.