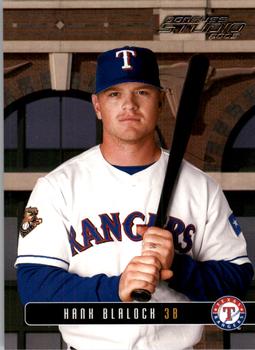 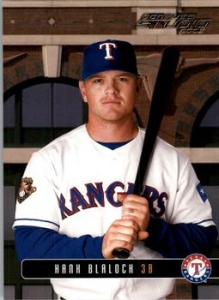 After the 2002 All-Star Snafu in Milwaukee — which ended in a tie when the National League ran out of pitchers — Major League Baseball took steps to prevent a recurrence. One was telling managers to hold back some pitchers in the case of extra innings. The other was to let the outcome of the All-Star Game determine which league would have home-field advantage in the World Series.1 “This time it counts!” was the slogan for the 2003 game at US Cellular Field, home of the Chicago White Sox.

The National League had a 40-31 edge in All-Star Games (with two ties), but the American League had won the last five. As usual, there was late shuffling among the rosters to replace injured players. In addition, Barry Zito of the Oakland A’s, who had won the AL’s Cy Young Award in 2002, had pitched eight innings two days before the All-Star Game, and wouldn’t be available.

Meanwhile, Roger Clemens of the New York Yankees had gone home to Houston for the break to spend time with his family. On Monday morning, the day before the All-Star Game, he got a call asking if he could get to Chicago to fill in for Zito. Clemens said he needed to first discuss it with his family, which was mostly agreeable. “My littlest one [Kody, the youngest of his four sons], I think he was ragging the most,” said Clemens, adding that they had planned to go fishing the next day. “He kind of sighed and took a deep breath and looked at me and said, ‘Dad, why can’t they get Andy Pettitte?”2

Clemens agreed to come to Chicago but not until Tuesday morning. By then a hurricane was threatening Houston, and he was told that a jet was being sent to College Station, about 95 miles away. With threatening weather moving in there, too, Clemens was also told he would have to be there in an hour and a half. He, along with his family, did. Asked how fast he was going in his vehicle, Clemens replied, “Fast. About as fast as I throw hopefully tonight.”

With his 41st birthday coming up in August, Clemens was planning to retire at the end of the season and thought this would be his last All-Star Game.3 Asked if another enticement, the home-field advantage, played a role in his decision, he said, “Well, it does for me.”4 After losing to the eventual World Series champion Anaheim Angels in the American League Division Series in 2002, the Yankees led the AL East by two games over the Boston Red Sox at the All-Star break.

Dusty Baker, as manager of the NL champion San Francisco Giants the year before, managed the National League (even though he was now manager of the Cubs). Anaheim’s Mike Scioscia was the AL skipper.

The starting pitchers, San Francisco’s Jason Schmidt and Esteban Loaiza of the White Sox, both pitched two scoreless innings. Clemens relieved Loaiza in the top of the third. Whether or not his fastball was as rapid as his driving, he got Javier Lopez to ground out and struck out Jose Vidro and Edgar Renteria.

With one out in the bottom of the third and Randy Wolf on the mound, Ichiro Suzuki walked. Playing in his third All-Star Game in three seasons since joining the Seattle Mariners from Japan in 2001, Ichiro took second on a two-out wild pitch and scored when Carlos Delgado lined a single to left.

The score stayed 1-0 as Kerry Wood and 40-year-old Jamie Moyer hurled a scoreless top and bottom, respectively, of the fourth inning.

Shigetosi Hasegawa wasn’t as fortunate in the top of the fifth. After Gary Sheffield led off with a walk, Todd Helton homered to center, giving the NL a 2-1 lead. Scott Rolen went the opposite way with a single to right before Hasegawa retired Lopez and Vidro.

After a single by Rafael Furcal, hitting for Renteria, Eddie Guardado relieved for the AL. Andruw Jones, batting for Jim Edmonds, grounded a ball down the left-field line and into the corner. A fan reached out and touched the ball, making it dead. The umpires, setting the runners by where they think they would have reached without the interference, gave Jones a double and awarded Furcal home plate, bringing an argument from Scoscia.5 The umpiring decision didn’t matter as Albert Pujols singled, bringing in Jones (on a hit that also would have scored Furcal even if the umpires had held him at third) and putting the NL ahead, 5-1.

Against Woody Williams, the AL closed the gap in the sixth. Alex Rodriguez singled and Garret Anderson homered to right-center, cutting the gap to 5-3.

Both teams scored on homers in the seventh, Jones hitting his to left off Mark Mulder and, in the bottom of the inning, Jason Giambi going long to right against Billy Wagner. The NL continued to hold a two-run edge at 6-4.

Brendan Donnelly put the National Leaguers down in order in the eighth, and Eric Gagne — who came into the game having converted all 31 of his save opportunities that season and sporting a 1.99 earned-run average — pitched the bottom of the eighth.

Gagne got Nomar Garciaparra to ground out before giving up a double to Anderson. Melvin Mora ran for Anderson and, with two out, scored on Vernon Wells’s double. Scoscia sent up Hank Blalock to bat for Troy Glaus. On a 3-and-1 pitch, Blalock hit a drive to right-center for a 427-foot home run that put the American League back in front, 7-6. (Gagne went on to a perfect season in 55 regular-season save opportunities in 2003, earning the NL Cy Young Award.)

After the game Blalock said, “Wells just got on second base, so I was trying to hit a single. That’s all I was trying to do. Fortunately, I worked myself into a good count where I could get something to hit.”

Keith Foulke was entrusted with the lead in the top of the ninth. He got both Paul Lo Duca and Luis Castillo to fly out to Wells in center, bringing up Furcal. On a 3-and-2 pitch, Furcal drilled a pitch to right, one that looked like it could tie the game. But the ball stayed in the yard and Magglio Ordonez, playing in his home ballpark, backed up to the fence and hauled it in.

With the 7-6 win, the American League had earned home-field advantage for its pennant winners, who were the Yankees. Clemens, with his scoreless inning, and fellow Yankee Giambi, with a home run, contributed to the cause.7 In the World Series, however, the Yankees lost in six games to the Florida Marlins.

Despite the supposed added incentive of home-field advantage, the All-Star Game was played in pretty much the same manner as before. With a requirement for every team to have a representative on the All-Star squad, with the number of teams up to 30, and with a desire to try to get as many players into the game as possible, the game followed its usual recent pattern of no one playing the entire game. All-Star Game managers have been known for clichés such as, “I’m going to manage this one like it’s the seventh game of the World Series.”8 Even with more supposedly riding on the outcome of the games starting in 2003, it’s likely that Dusty Baker would not have sent Rondell White to hit for Barry Bonds in the seventh inning if this really had been the seventh game of the World Series.

The article was fact-checked by Bruce Slutsky and copy-edited by Len Levin.

In addition to the sources cited in the Notes, the author consulted the Baseball-Reference.com and Retrosheet.org websites for pertinent material and the box scores noted below. He also relied on his own scoresheet and memories from attending the game and Roger Clemens’s press conference.

1 Home-field advantage referred to the team that would start with two games at home and, if the Series went the full seven games, have the extra home game.

2 Pettitte was a teammate of Clemens’s on the Yankees.

3 Instead of retiring after 2003, Clemens went to Houston (in part lured by friend Andy Pettitte’s decision to join the Astros) and was awarded his seventh Cy Young Award in 2004. He started the 2004 All-Star Game, pitched in the 2005 All-Star Game, and spent three years with the Astros before finishing his career back with the Yankees in 2007.

4 Clemens’s quotes and description of what happened over the previous day and a half occurred in a pregame press conference.

5 Although the umpires place the runners according to their judgment, the batter and any runners are usually awarded two bases. Fan interference is not an automatic double although many or most announcers say “ground-rule double” when fan interference occurs (by far not the only thing the announcers get incorrect). It was possibly because of this perception regarding fan interference that Scioscia argued.

7 Alfonso Soriano, Jorge Posada, and Hideki Matsui were the other Yankees in the game.

8 This quote is not attributed to any particular manager, only the ones who spew clichés (which doesn’t cull the herd much).