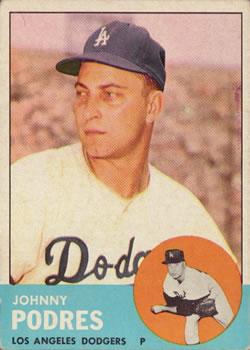 That feeling continued into the following night for 35,536 patrons of Dodger Stadium, where the Cincinnati Reds mustered only a couple of hits against Johnny Podres. His 1-0 victory extended the Dodgers’ winning streak to five games.

Then in the 10th season of a 23-year tenure as the Dodgers skipper, Walter Alston praised the lefty: “He sure knew what he was doing. I’ll bet he wasn’t off the mark with more than three pitches all night.”1

Coming into Chavez Ravine, the Reds had the pressure of traveling to the West Coast to end a road trip after losing a July 4 doubleheader in Houston. Especially stung was Vada Pinson, whose 0-for-3 night against Podres stopped his 23-game hitting streak.2 Nevertheless, he remained among the NL’s elite: sixth in batting average and fourth in RBIs, trailing Hank Aaron, Ron Santo, and Bill White.3

In the month preceding the game, the Reds showed prominence, if not dominance, in the National League. On June 5 they were 24-25. When they took the Dodger Stadium field to face Podres, the record was 44-37; Cincy finished the season in fifth place with an 86-76 account.

Podres began his journey of superiority by striking out Reds leadoff batter and 1963 National League Rookie of the Year Pete Rose—the first of four strikeouts for the left-hander. The others were Frank Robinson, Daryl Spencer, and Charlie Neal.

There was no concern for Podres regarding the low number of strikeouts: “It didn’t bother me that I wasn’t striking out a lot of batters. As long as they hit the ball to somebody, I was happy.”4

The Reds got their first hit in the top of the fourth, a one-out single by Tommy Harper that flirted with the glove of Dodgers third baseman Ken McMullen.5 Frank Finch of the Los Angeles Times attributed Harper’s hit to “a tricky hop.”6 But his peer Wells Twombly blamed the fielder: “And if rookie third baseman Ken McMullen were a couple of years wiser in experience, Tommy Harper’s single in the fourth would never have left the infield.”7

A member of the opposing team’s hometown press was kinder. Bill Ford of the Cincinnati Enquirer wrote, “Harper’s sizzler that third baseman McMullen deflected with one out in the fourth represented the Reds’ first safety.”8 The Cincinnati Post and Times Star’s Earl Lawson called it a “bad-hop grounder.”9

Pinson’s double-play grounder extinguished any flicker of a rally for the Cincinnati nine. Two innings later, Johnny Edwards banged a one-out single for the visiting team’s second and final hit.

Jim O’Toole had a fine outing overshadowed by Podres. The Reds lefty constrained the home team to six hits and tallied seven strikeouts. Before Frank Howard led off the seventh inning with a solo home run, O’Toole had not let a Dodger get a hit since the second inning. Edwards had a perfect vantage point as the Reds catcher. He explained, “The pitch Howard hit for a home wasn’t a bad one. It was the same pitch he struck out Howard with his second time at bat.”10

It brought Howard’s season home-run total to 13; he finished with a team-leading 28.

Moose Skowron trailed Howard’s homer with a single, then left the game for pinch-runner Willie Davis. It was a simple choice for Alston because of Davis’s speed. When Davis died in 2010, honors were numerous. Former teammate Manny Mota said, “The thing about Willie Davis that left the greatest impression on you was the sight of him running. Once in spring training, I saw him score from second base on a fly ball to center field. He was the only person I ever saw do that.”11

Ron Fairly’s sacrifice bunt to O’Toole advanced Davis to second base and raised the hopes of Dodger Nation. But they lowered nearly as fast. McMullen whiffed; Doug Camilli received an intentional pass to pitch to Podres, who grounded to Spencer at third base.

Both pitchers showed exemplary control—other than the intentional walk to Camilli, neither allowed a base on balls. Podres also had some defensive help to keep the Reds at bay. Los Angeles Times reporter Frank Finch observed that left fielder Tommy Davis’s “leaping catch” possibly prevented Leo Cardenas from getting a double in the top of the second inning. Podres explained that he “threw mostly fast balls and curves,” but the Cardenas smash came on the only changeup of the game.12

In addition, after Edwards’ sixth-inning single, first baseman Skowron “made a nifty fingertip catch” when O’Toole’s bunt attempt sent the ball in the air in foul territory.13

Alston made some defensive swaps to begin the top of the ninth. Second baseman Jim Gilliam  replaced McMullen at third; Nate Oliver took over Gilliam’s post at second and McMullen’s batting slot in the lineup if the game went into extra innings.

Immediately, Oliver saw action; Edwards grounded out. Neal struck out in his pinch-hitting appearance for O’Toole; Ken Walters pinch-hit for Rose and fouled out to Gilliam.

Podres not only notched a win through fantastic pitching, but also gave a psychological lift to Dodgers fans by reinforcing his rebound from a recent arm problem.

In a game against the Cardinals on June 23, Julián Javier singled and Dick Groat homered to lead off the game against Podres. After striking out Bill White and walking Ken Boyer, Podres left with an inflamed elbow.14 He had failed to last beyond the first inning for the second consecutive start; Bob Miller replaced Podres. Ron Perranoski took over in the seventh inning.

Podres did not join the team for the road trip to Cincinnati. Instead, he headed back to the City of Angels for cortisone treatment.15 Back at work a few days later, he whiffed 12 in a 2-1 win against the Braves on July 1.

O’Toole and Podres tied with Ernie Broglio, Ray Culp, and Juan Marichal for fourth place in major-league shutouts in 1963 with five each. Podres’ teammate Sandy Koufax set the pace with 11 to lead the majors. O’Toole’s loss gave him a 13-6 record and a stellar 2.02 ERA heading into the All-Star break. Podres praised his opposition: “That O’Toole is a mighty tough pitcher. He has a great breaking ball and a good assortment of pitches.”16

Podres’s win, which was his 20th career shutout and took less than 90 pitches to accomplish, brought his record to 6-6; he finished the season at 14-12. It came in the middle of the Dodgers’ 17-3 jaunt through the Braves, Cardinals, Reds, Mets, and Phillies between June 23 and July 14.17

Less than a month after the two-hitter, Podres showed his prowess again by dominating the Colt .45s in Colt Stadium on August 4 and taking a no-hitter into the ninth inning. Johnny Temple’s leadoff single prevented the no-no.

Los Angeles headed the National League at the end of the season with a six-game lead over the second-place Cardinals. Podres et al. faced the Yankees in the World Series for the first time since 1956 and swept the Bronx Bombers.

This story was fact-checked by Kurt Blumenau and copy-edited by Len Levin.

In addition to the sources in the Notes below, the author consulted Baseball-Reference.com and Retrosheet.org for pertinent information, including the box score.