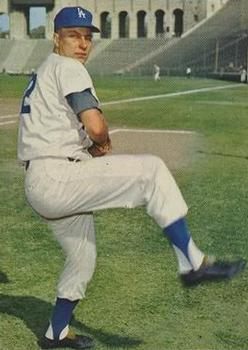 That’s the firepower provided by the Dodgers offense for Johnny Podres on June 11, 1959. But the lefty needed only a one-run cushion as he outmaneuvered the Phillies in a two-hit shutout at Connie Mack Stadium.

A crowd of 15,819 inhabited the ballpark for this nighttime game.

Philly’s rooters mourned the disaster, which took 2 hours and 10 minutes to finish – just six minutes short of the running time for the host city’s latest cinema depiction, The Young Philadelphians, which debuted in theaters a month earlier, starred Paul Newman, and showed the dark side of the area’s hoity-toity Main Line society.

Jim Gilliam began the onslaught with a leadoff single in the top of the first.

John Roseboro struck out looking to send the Phillies offense to bat with a four-run shortage.

Richie Ashburn gave the home team its first hit with a leadoff single. Podres recovered by getting Gene Freese to smack a grounder to shortstop Don Zimmer for a double play, followed by striking out Ed Bouchee looking.

LA added three more runs in the top of the second, escalating the score to 7-0. Podres and Gilliam hit back-to-back singles, giving them occupancy of first and third bases. Neal’s double scored Podres for the Dodgers’ fifth run; Gilliam arrived at third.

Phillies manager Eddie Sawyer then substituted Jack Meyer for Roberts, but the move did about as much good as kayaking in the Schuylkill River without a paddle. Wally Moon singled home Gilliam; Neal went to third and scored on Snider’s sacrifice fly to Ashburn, patrolling center field. It became a double play when Ashburn threw to rookie Sparky Anderson to tag out Moon trying to take second base.

Meyer settled in in the third; neither team scored.

Humberto Robinson relieved Meyer to begin the top of the fourth. He retired Gilliam on a fly to right fielder Wally Post, followed by Neal and Moon on groundballs.

Sawyer kept the righty on the mound for the next frame but called for Curt Simmons to start the top of the sixth. The left-hander gave up a triple to Roseboro, who tried to extend his bash into an inside-the-park home run. His effort was “about five feet short.”1 Ashburn threw to shortstop Joe Koppe for the cutoff and the subsequent throw home nabbed Roseboro.

Zimmer kept Koppe busy with a grounder for the second out. Podres got his second single of the game, this one on a bunt. But Gilliam’s lineout to Harry Anderson in left field sent the Dodgers back for defensive duty.

Dodgers skipper Walter Alston made two changes in the top of the seventh. Rip Repulski pinch-hit for Moon and grounded out to Koppe. Carl Furillo took Snider’s place and singled.

Hodges’ double sent Furillo around third base, but Harry Anderson sent the spheroid to the cutoff man – Koppe – who threw to Freese at third base to get Furillo out.

Not all the credit can be given to the Anderson-Koppe-Freese combination, though. Furillo assisted by backtracking to third base when he was “halfway to the plate” in the belief that he hadn’t connected a foot with the bag.2

When the Phillies came to bat in the bottom of the seventh, Alston sent Repulski to replace Moon in left field.

Demeter accounted for the eighth run with his second bash of the night – a solo home run in the top of the eighth inning.

Taylor Phillips was tapped to pitch in the top of the ninth; LA’s batsmen responded with a pounding that led to three runs. Neal’s double and Repulski’s walk began the sequence. Furillo got a single to shortstop; on Koppe’s error, Neal scored, Repulski took third, and Furillo reached second. Alston sent Ron Fairly to replace Furillo.

Roseboro’s lineout to right fielder Post and Zimmer’s double-play grounder to Koppe ended the disaster for the Phillies.

Fairly took over right field from Furillo for the bottom of the ninth and got some work. After Ashburn struck out, Fairly caught fly balls hit by Freese and Bouchee.

Roberts’s early trek to the Phillies bench had more to do with the Dodgers’ offense than quality pitching, according to Snider: “There are two ways of looking at it. You can say Roberts didn’t have his good stuff or you can give the Dodgers some credit and say they were hitting.”3

Indeed, LA’s scorecard was the stuff that baseball dreams were made of, to borrow the last line of The Maltese Falcon and give it a National Pastime spin. Gilliam, Neal, Snider, Furillo, and Hodges each had two hits. Demeter’s 4-for-5 night with two homers, two runs scored, and five RBIs made him the offensive standout of the game. He finished the season with 18 round-trippers.

Podres’ three hits were impressive, contributing one run to his 11-run padding. He struck out seven in his display of adroitness, which gave the lefty his second two-hitter in less than three weeks. Podres had an 8-0 victory against the Giants in San Francisco.

After the thrashing in Philadelphia, the Dodgers stood in third place two games behind San Francisco and four games behind the NL-leading Braves. The Pirates and Cubs were just behind them, a half-game and one game back respectively.

Podres’ outing ended the Philadelphia segment of the Dodgers’ road trip on a positive note. They had lost two of three to Cincinnati and taken two of three from Milwaukee. With the 11-0 victory, they secured a two-of-three excursion in the City of Brotherly Love for a 5-4 record to date.

The Dodgers’ Pennsylvania travels continued to Pittsburgh, where they lost three of four games to the Pirates and returned to Southern California with a 6-7 tally on the trip.

The victory gave Podres a 7-2 record; he finished the season at 14-9. LA tied with Milwaukee for the NL flag and took the first two games in the best-of-three playoff to represent the senior circuit in the 1959 World Series. The Dodgers then won their first championship as a City of Angels squad, beating the Chicago White Sox in six games, with Podres winning Game Two.