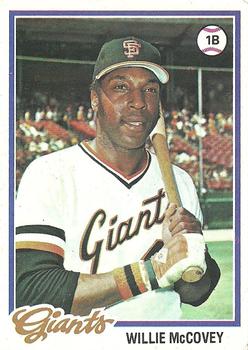 It was a bright spot for Giants fans, though a victory would have been nice.

In the first game of a doubleheader on June 30, 1978, Willie McCovey satisfied the anticipation of baseball fans when he hit his 500th home run. The Giants lost to the Braves 10-9 at Atlanta-Fulton County Stadium, but the smash put the slugger nicknamed Stretch in an upper echelon including Mickey Mantle, Ted Williams, Ernie Banks, and Giants alumni Willie Mays and Mel Ott.

McCovey had faced a bit of a drought in June on his journey to the five-century mark.

His 498th and 499th homers happened more than three weeks apart, on June 5 and June 27. Both were solo round-trippers against Steve Carlton of the Phillies and Dennis Kinney of the Padres.

In this game, the home team scored first in Atlanta; Braves second baseman Rod Gilbreath led off the game with a single and took second on Bob Beall’s groundout to second baseman Bill Madlock. Rowland Office singled – which put Gilbreath on third – and advanced himself 90 feet on a stolen base.

McCovey’s historic homer led off the Giants’ half of the second inning to even the score at 1-1. It was an opposite-field shot over the left-field wall. Braves lefty Jamie Easterly turned around to watch Burroughs sprint for a possible catch, then give up chase when the ball was clearly destined to become another home run at Atlanta’s “Launching Pad.” A quartet of Giants greeted McCovey at home plate.

After beginning the fourth inning with a double, McCovey left for pinch-runner Jim Dwyer; Giants skipper Joe Altobelli attributed the switch to the heat’s effect on his first baseman.1

The teams stayed deadlocked until the Bay Area’s batters dominated Atlanta in the top of the sixth inning, including two homers.

Montefusco was pulled after walking Biff Pocoroba, who pinch-hit for Campbell. Then an offensive and defensive switch occurred – Jerry Royster entered as a runner for Pocoroba and Gary Lavelle relieved Montefusco.

Gilbreath’s sacrifice attempt resulted in his taking first base on Lavelle’s error. With Royster now on third base, Beall’s sacrifice fly gave Atlanta its sixth run.

The home team went up 10-6 in the bottom of the eighth. Dale Murphy smacked a pinch-hit single. Lavelle fielded Horner’s sacrifice bunt – which advanced Murphy – then intentionally walked Bonnell and whiffed Chaney for the second out. Gene Garber drew a walk to load the bases.

Matthews got the next two RBIs in the inning with a single to score Garber and Gilbreath. Burroughs’s fly ball to Cruz in left field ended the onslaught and sent the Braves back to play defense. Moffitt was charged with Garber’s scoring. Although four runners scored, he had inherited the bases-loaded situation.

The four-run lead was a nice cushion. But it nearly wasn’t enough. The Giants mounted a comeback in the bottom of the ninth that threatened the Braves with a highly significant display of power.

Facing two outs, Madlock’s solo blast and Clark’s two-run homer after Darrell Evans’s single pulled the Giants within a run. But Dwyer’s fly out to Burroughs in left finished the game with the score 10-9.

The Giants lost the second game of the doubleheader as well. Afterward, McCovey commented that the burden of anticipation had been lifted. “It was more of a relief than a thrill to get it over with,” said the 12th member of the 500-home-run club. “I was kind of anxious to get it behind me so we can concentrate on a more important thing, the pennant race.”2

Though it was clearly a time of celebration, the 6-foot-4 power hitter noted that the achievement was not as important as the loss in the first game. “I’d have felt a lot better about the homer if we’d hung on to win,” said McCovey.3

Losing the twin bill put the team’s June record at 17-13. Standing atop the NL West and leading Los Angeles by three games gave Giants fans optimism for their first pennant since 1962. It was not to be. The Dodgers won the flag; San Francisco finished in third place, six games behind their rivals.

Beginning the season with 493 home runs made the 500 mark a foregone conclusion, especially for the native of Mobile, Alabama. In an interview before the 1978 season, McCovey attributed his achievements to staying power. “All of the goals I have reached have been because I played as long as I have,” said the ballplayer. “Maybe that’s why they didn’t thrill me as much.

McCovey ended his career after the 1980 season with 521 home runs.

It was appropriate that McCovey reached the 500-homer milestone and ended his career two years later in a Giants uniform, though a couple of years earlier it looked as though that wouldn’t happen.

After the ’73 season, Giants owner Horace Stoneham did the unthinkable – he traded the Giants icon. Plus, the exchange sent McCovey to the Padres, an NL West competitor. He stayed with the team until late August of 1976, when Padres owner Ray Kroc sold him to the A’s. McCovey became a free agent during the offseason and signed with his old team at the beginning of January.

During his Hall of Fame induction speech in 1986, McCovey acknowledged the mutual affection between him and the city. “I’ve been adopted, too, by all the thousands of great Giants fans everywhere and by the city of San Francisco, where I’ve always been welcome and, like the Golden Gate Bridge and the cable cars, I’ve been made to feel like a landmark, too.”5