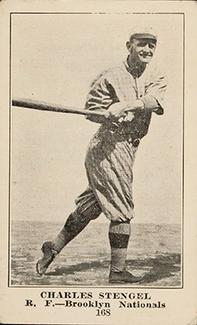 Casey Stengel, who had debuted in the majors with 17 games for Brooklyn in September 1912, had initially held out for a better contract in his first full season with the Superbas. On March 13, 1913, Charlie Ebbets “finally sent him a contract he found satisfactory.”1 However, according to the Brooklyn Citizen, Stengel “had been tipped off that left-hand hitters had no chance”2 to make the squad. With veterans Zack Wheat and Jake Daubert on the team, both of whom batted left-handed like Stengel, this notion might have been true. Daubert batted .308 in 1912 and won the Chalmers Award as the National League’s Most Valuable Player in 1913, as he led the senior circuit with a .350 batting average. Wheat batted .305 in 1912.

But Stengel made the team and earned the starting job in center field. On April 5, 1913, he became the first Brooklyn player to bat at the new ballpark, and in the fifth inning, he hit the first home run at Ebbets Field.3 All this happened in an exciting exhibition game pitting the National League Superbas against the American League New York Yankees. A crowd of 25,000 “filled every seat in the huge plant”4 and cheered their home team to a 3-2 victory.

Less than a month later, the 7-6 Superbas hosted the 3-9 Boston Braves in a Thursday afternoon contest. Brooklyn’s Eddie Stack and Boston’s Otto Hess had the mound duties. Stack was making his second start of the season and hadn’t allowed an earned run in his first start, a complete-game win over these same Braves. He had also had a brief relief appearance (on April 29 against the New York Giants, not allowing any runs). Hess was making his third start, and although he had two complete games in his first two outings, he had allowed 17 runs (12 earned) in losses to the New York Giants and these Superbas.

The hero of the day turned out to be Stengel. Every one of the New York newspapers headlined their sports pages with Stengel’s accomplishment: home runs in both of his first two at-bats.

Leading off the bottom of the first inning, Stengel “took the Bostonese by storm with his first mighty clout.”5 After taking strike one from Hess, Stengel drove the next offering into the gap between John Titus in right and Les Mann in center. Mann chased down the ball “twenty feet from the flagpole,”6 but Stengel had crossed home plate “before the sphere reached the infield.”7 John Hummel and Daubert each singled later in the inning, but Boston’s defense prevented further scoring.

In the second inning, Brooklyn’s Otto Miller singled with one out and stole second base. He advanced to third as Hess retired his counterpart Stack, and the Superbas’ lineup flipped to the top of the order.

Now, according to the Boston Globe, “just to prove that his first long hit was no fluke,”8 Stengel smashed a pitch to left-center that sailed over Mann’s head. The ball “just grazed the tips of Mann’s glove”9 and then “bumped up against a beer sign on the left field fence.”10 Mann played the carom perfectly and threw the ball to shortstop Rabbit Maranville, who, like Stengel, was in his first full season after a September 1912 debut. The diminutive Maranville expertly relayed the ball to catcher Bert Whaling, but Stengel “tapped the plate with four yards to spare.”11 Brooklyn had a 3-0 lead, all due to Stengel’s clouts.

The Braves broke onto the scoreboard in the fifth inning. After a single by Art Devlin, Whaling walloped the ball into right field, putting runners at the corners. Hess “bounced a single off the starboard big toe”12 of Bob Fisher, resulting in the Braves’ first tally of the game as Devlin scored. It was the first hit (and run batted in) of the season for Hess.13

Maranville grounded sharply to second baseman George Cutshaw. Instead of stopping between first and second — which might have prevented a double play by forcing Cutshaw to throw either back to second or on to first (and might have allowed the runner at third to score) — Hess ran right into Cutshaw, who tagged him and threw to first to complete the inning-ending double play. According to the Brooklyn Daily Eagle, Hess’s baserunning was a “bonehead play of the kind that is rapidly making the Braves notorious.”14

Brooklyn countered with a run in the home half of the fifth frame. With one out, Hummel doubled and scored on Wheat’s RBI single. Brooklyn had regained its three-run advantage.

Boston started another rally in the top of the seventh. Titus walked and stole second as Mann struck out, the first swipe of the season for the 37-year-old outfielder (described in the press as “ye ancienter”15). Titus was driven home when Devlin cracked a single up the middle. Jay Kirke entered the game, pinch-hitting for Whaling. He reached on an infield single, keeping the rally going.

Cy Seymour batted for Hess and struck out. Stack retired Maranville on a fly out to end the threat (“the last dying chances of the Hubs evaporated”16) and keep the score 4-2 in favor of the Superbas.

In the eighth, the Braves threatened again. Joe Connolly lined a ball into center that could have been for extra bases, but Stengel made a diving catch. Later in the inning, Sweeney singled and Titus walked, but no runners touched the plate as Stack fanned Mann for the third out. The Braves went quietly in the ninth, and the Superbas won.

The New York Sun provided its readers with the following description of Stengel: “This sturdy youngster, whose address is [the] corner of Slug and Smash streets, Poundsville, not only made himself prominent in the mathematical records of the affair but he put the Beantown invaders on the defensive right from the jumpoff.”17 In addition to Stengel’s 2-for-4 performance, Hummel was 3-for-4 (a double and two singles), which raised his batting average to .412. Stengel and Hummel accounted for five of Brooklyn’s eight hits. The victory put the Superbas within a half-game of the New York Giants for first place in the National League.

Stengel belted seven home runs in 1913. He batted .272 for the season, but more importantly, the left-handed-hitting rookie had secured a position in the Brooklyn roster.

The record for inside-the-park home runs in a game is three, held by two batters (Guy Hecker (August 15, 1886) and Tom McCreery (July 12, 1897). Both played for Louisville (Hecker when Louisville was in the American Association and McCreery when the team competed in the National League).

Stengel is one of only 10 players to hit an inside-the-park home run in the World Series.18 He did so in Game One of the 1923 Series, in the ninth inning, to give the New York Giants the victory over the Yankees. This gave Stengel the distinction of having hit the first postseason home run in the new Yankee Stadium.

Stengel accomplished the feat of two homers in a game again on June 1, 1920, while playing for the Philadelphia Phillies (in the seventh and ninth innings). Those were his first two round-trippers of the 1920 season.19