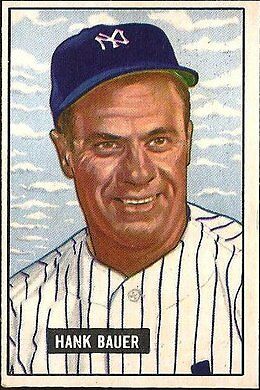 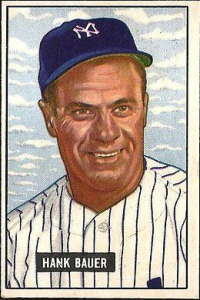 The clock finally struck midnight on the Cinderella New York Giants when the New York Yankees hung on to take the 1951 World Series with a 4-3 Game Six victory, sparked by the heroics of Hank Bauer at the plate and in the field. As befitting a crazy season that columnist Red Smith called a “catter-brained rigadoon,”1 the 1951 campaign closed with a showdown between Giants pinch-hitter Sal Yvars and Yankees reliever Bob Kuzava, two players who had not appeared in the Series until its climactic final frame.

For Giants fans, Game Six began with an ominous echo of Game Five. With Jerry Coleman on third, Yogi Berra on second, and one out in the bottom of the first, Giants manager Leo Durocher again faced a choice of pitching to a veteran (Joe DiMaggio, in his last game) or walking him to face Gil McDougald, whose third-inning grand slam after an intentional walk had broken Game Five open.

Durocher made the same choice – calling for a walk – and Dave Koslo fared better than Larry Jansen, yielding only a sacrifice fly to McDougald that put the Yankees up 1-0.

Vic Raschi held the lead through four innings, aided by a pair of double plays started by Phil Rizzuto, who added a third twin killing in the sixth. “The Scooter was the hidden star of this series, ripping off one double-play after another until the Yankees had reached a record total,” the New York Times’s Arthur Daley commented.2

The Giants broke through to tie the score with an unearned run in the fifth on Willie Mays’ single, Berra’s passed ball, and two fly outs. Still looking for his Series record-tying 12th hit, Monte Irvin grounded out with two out and two on to keep the game knotted, 1-1.

Back in right field against the right-handed Raschi, Hank Thompson bobbled Berra’s one-out single into the right-field corner in the sixth, allowing Berra to take second. Again, Durocher had DiMaggio walked to get to McDougald. Koslo’s wild pitch advanced both runners, but McDougald lined to third.

Johnny Mize walked to bring up Bauer with the bases loaded, two out, and the score tied. The confrontation proved pivotal.

“With the count three and two, Hank hammered a high fly toward left field and for many a day Polo Grounders will argue whether Irvin could have caught that ball,” the New York Times reported. “Mont[e] [Irvin], bothered by a stiff wind, did not play it too well. For one thing, he turned the wrong way. For another, he appeared to have been playing too shallow for a left field, long ball hitter like Bauer.”3

“For a moment the shot looked like another grand slam homer, but it didn’t quite have enough carry. It struck the front railing of the field boxes in back of Irvin and as the ball bounded away all three Yankee base runners scored, with Bauer pulling up at third.”4

After the game, Bauer said, “Koslo threw a lot of knucklers out there today but the pitch he threw me when I hit that triple was a belt-high fast ball.”5

A leg injury may have impaired Irvin’s pursuit, the New York Times noted. “Monte may have felt that he could have made the catch had he been playing entirely healthy. Without saying anything about it the Negro outfielder has been unable to run at his usual speed since a slide into second base in the second game.”6

Gene Woodling could not cash in Bauer, but with the Yankees up 4-1 with three innings to go, extra runs seemed superfluous.

The Giants, however, had been rallying for months, overcoming a 13-game deficit in the National League after August 11 and a three-run hole in the ninth inning of Game Three of the NL playoff. Down to its final nine outs, Durocher’s team persisted.

Raschi yielded singles to Mays and pinch-hitter Bill Rigney to start the seventh, and the Giants swiftly had the tying run at the plate. Stengel pulled Raschi in favor of Johnny Sain, a late-season acquisition from the Boston Braves and the first of two Yankees relievers who made their first appearances of the Series this day. This was the first time in the World Series that Stengel had asked his bullpen to hold a late-inning lead; all three previous Yankees wins were complete games.

In seven seasons with the Braves, Sain had pitched well against the Giants, with a career record of 16-10, two saves, and a 3.36 ERA. He had good numbers against the three upcoming hitters (Eddie Stanky, Al Dark, and Whitey Lockman), who had batted only .248 against him (35-for-141). Sain’s track record held as he retired all three Giants to preserve the three-run cushion.

Jim Hearn, who had not pitched since his outstanding eight-inning effort in Game Three, came out of the Giants’ bullpen to work around Rizzuto’s infield single in the seventh.

After dousing Raschi’s fire in the seventh, Sain started a conflagration of his own with two outs in the eighth. The 34-year-old right-hander, who had set down the first five Giants he faced, walked Thompson, allowed a single to Wes Westrum, and walked Mays.

The tying run was on base and the go-ahead run at the plate with two outs. Ray Noble, a powerful Negro National League veteran who had joined the Giants in 1951 at age 32 and contributed five home runs as a backup catcher and pinch-hitter, batted for Hearn. But Sain struck out Noble looking on an 0-and-2 pitch to strand three.

Jansen came on in the eighth and allowed the last hit of DiMaggio’s career, a double, to start the inning. But the Yankees went down quickly after that, with Jansen throwing to third on McDougald’s sacrifice attempt to erase DiMaggio, Joe Collins flying out, and Noble gunning down McDougald attempting to steal second.

The Yankees were just three outs from a third consecutive championship, but Sain was fading. Stanky, Dark (a bunt), and Lockman singled to start the ninth. For the second inning in a row, the Giants had loaded the bases, this time with none out.

With right-handers Irvin and Bobby Thomson due up, Stengel went to his bullpen for what the New York Times labeled “perhaps as deep and mystifying a piece of managerial strategy as any world series has seen,”7 calling on the left-handed Kuzava, a June 1951 trade acquisition from the Washington Senators.

In part-time action, Kuzava had recorded five saves for the Yankees, only one off the team lead, suggesting that Stengel had confidence in the 28-year-old veteran.

“Kuzava frankly admitted he was nervous,”8 “but Stengel gambled with … Kuzava, because of his control. ‘Get it over. Make ’em hit it in the air. We’ll get ’em out,’ Casey told Kuzava.”9

The first batter Kuzava faced, Irvin, hit a deep fly to Woodling in left. All three runners advanced, with Stanky scoring the Giants’ second run of the game. Inexplicably, Woodling threw to third to try to nab Dark, allowing Lockman, the tying run, to take second.

Thomson was next, seven days after his “Shot Heard ’Round The World” home run, under almost identical circumstances, had rallied the Giants to victory in the NL playoff. He fell just short this time, although his sacrifice fly to Woodling cut the lead to 4-3.

An out from defeat but a hit from a likely tie, Durocher called back left-handed Hank Thompson, seeking the platoon advantage with Yvars, a 27-year-old backup catcher who had hit .317 in 50 plate appearances in 1951.

Yvars acquitted himself admirably with an opposite-field liner, but Bauer in right made an “amazing catch” to end the World Series.10

“I thought for a while I wouldn’t make it,” Bauer admitted afterward. “I lost it in the shadows. I was playing him shallow. But [I] started running with the crack of the bat. Even so, I had to leg it like all get-out and wound up sitting down to make the catch, skidding along the ground. I knew I couldn’t let that one get past me and didn’t.”11

Durocher graciously praised Bauer’s glove work: “He made a great catch. And he couldn’t have made it if the ball had been six inches shorter or a foot to either side and not directly at him.”12

In his first three years as manager of the Yankees, Stengel had skippered his squad to Series wins over the Brooklyn Dodgers, Philadelphia Phillies, and now the Giants, highlighted by a bravura use of his bullpen in Game Six. “A man eating a plate of spaghetti while standing on his head would have had little on Casey Stengel today,” opined Harold Kaese of the Boston Globe. “Stengel stood strategy on its head, kicked it on the shins, and tickled its ribs – but, as usual, he was the winner.”13

“Stengel had called on a left-handed pitcher to stop three long-ball-hitting right-handed batsmen and … had got away with it.”14

The incredible 1951 New York Giants season had ended with high drama, a fitting conclusion to a memorable campaign. “We would have been in real trouble if it had gone down to a seventh game,” confessed DiMaggio. “All my years in baseball I never saw a ball club come back with so much fight.”15

While some lamented what might have changed had Don Mueller been healthy enough to have played,16 others with more perspective realized that the Giants, while falling to the Yankees in the Series, ultimately triumphed over the Bombers in the annals of the most memorable teams in baseball history.

This article was fact-checked by James Forr and copy-edited by Len Levin.

In addition to the sources cited in the Notes below, the author consulted Baseball-Reference.com and Retrosheet.org for pertinent information, including the box score and play-by-play.

2 Arthur Daley, “From Force of Habit,” New York Times, October 11, 1951: 54. Another observer disputed the “hidden” portion of Daley’s description. “Phil Rizzuto’s spectacular play day after day, his 39 chances accepted, for a six-game Series high, his participation in nine of the Bombers’ record ten double plays, his topping Yankee regulars with a mark of .320, all combined to make him the writer’s choice as the hero of the Series.” Dan Daniel, “Bauer Proves Double Hero in Series Clincher,” The Sporting News, October 17, 1951: 6.

3 John Drebinger, “Yanks Win Series as Bauer’s Triple Tops Giants, 4 to 3,” New York Times, October 11, 1951: 52. White Sox manager Paul Richards blamed Durocher for this sequence of events, starting with the walk to Mize, the ex-Giant. “Leo Durocher should never have disposed of big John Mize. … Durocher instructed Koslo to give Mize nothing good to hit. The resulting base on balls brought up Hank Bauer, a righthand hitter who loves lefthanders. On a 3-2 pitch the expected happened. A tremendous triple to left even scored the lumbering Mize from first base. Ed Burns, “The Professor Discusses Second-Guessing,” The Sporting News, October 24, 1951: 12.

16 “The loss of Mueller against the Yankees was a blow to the Giants. He had been playing and hitting well during the long drive the club made to the pennant and his bat could have been a lot of help, since Durocher’s ‘bench’ was no great threat.” McGowen. “The Giants’ outfield did not distinguish itself defensively during the World’s Series, either in right field or in left, where Monte Irvin was not as impressive as he was at the plate. Particularly, the Giants did not deploy in proper position for key hits in contrast with the Yankees’ perfect position for important catches and stops.” Ken Smith, “Giants Face Changes in Flag Lineup,” The Sporting News, October 31, 1951: 18.