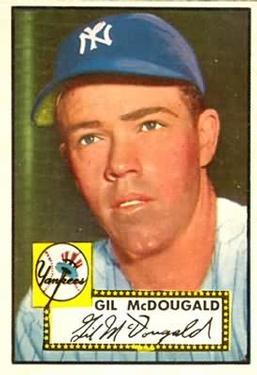 The pendulum kept swinging the same way after the New York Yankees had evened the 1951 World Series with a convincing win over the New York Giants in Game Four. Gil McDougald hit the third grand slam in World Series history, Eddie Lopat pitched his second five-hitter of the Series, and the Yankees bombed the Giants, 13-1 in Game Five at the Polo Grounds on October 9, taking the lead for the first time with a three-games-to-two edge.

Shoddy outfield play by a regular outfielder led to a first-inning run against Lopat, back on the mound four days after his Game Two gem. After a single by Al Dark, “one of two Giants still able to hit the ball,” per the New York Times,2 the only other Giant still swinging a hot bat, Monte Irvin, had his 10th hit of the Series, one that went down the third-base line and bounced sharply off the Polo Grounds’ close left-field wall. When Gene Woodling “fumbled and then threw unwisely to second base, [Dark] kept right on running” to score.3 The play was scored a single and an error on Woodling; the Giants led, 1-0.

The National Leaguers held that lead into the top of the third. Larry Jansen, the losing pitcher in Game Two, had walked two to put two on with two out for DiMaggio, who “brought in the tying run with a single to left—a drooping liner which Irvin couldn’t clutch.”4

Irvin failed to pick up the ball cleanly; Yogi Berra took third and DiMaggio second on the error.

With two runners in scoring position and two outs, Durocher faced a dilemma: Attack the veteran Mize—at age 38 on the downside of his Hall of Fame-bound career but still possessing occasional power and a fine batting eye—with the open base or pitch to the rookie Gil McDougald with the bases loaded?

Durocher opted to go after the youngster, who looks “awkward in everything he does,”5 according to DiMaggio, a not always supportive teammate. McDougald did win the AL Rookie of the Year Award in 1951 after finishing in the league’s top 10 in batting average, on-base percentage, slugging percentage, and stolen bases.

Jansen missed with his first pitch, leaving him little margin for error. After the game he explained, “I didn’t think I could risk getting behind on McDougald any more with the bases filled and my first pitch a ball. I gave him a fast one—and you know what happened.”6

The 23-year-old McDougald drove the next pitch into the upper stands in left field for a grand slam, giving the Yankees a 5-1 lead.

McDougald commented, “It was … letter-high. I didn’t know it was going into the seats when I struck. … But I knew it was a solid smack.”7

Another Yankee second baseman had hit the last World Series grand slam, under similar circumstances. In 1936 Tony Lazzeri’s swat—also coming in the top of the third inning at the Polo Grounds against the Giants—had broken open what turned into an 18-4 win in Game Two of a Series that the Yankees eventually won in six games.

Jansen’s day ended after the third inning, to the surprise of McDougald, who “thought Jansen pitched good ball all the way and as a matter of fact I was kind of surprised when they took him out.”8 Left-hander Monty Kennedy came on for the fourth. After a one-out walk to Woodling, Phil Rizzuto hit an opposite-field home run to right, barely clearing the wall. The two-run blast put the Yanks up, 7-1.

George Spencer came on in the sixth and gave up two more runs, one on a double by Mize,9 to widen the lead to 9-1.

The next inning went even worse for the home team. “In the seventh, the Giants looked like Bill Veeck’s midgets as Spencer was routed during a four-run assault.”10 Spencer did not survive the frame. He and Al Corwin combined to issue three walks, throw a wild pitch, and yield a bunt single by Collins—with the Yankees up by eight runs—and a DiMaggio double. The middle infielders deserved part of the blame. “The Giants missed a double play in the seventh when both Al Dark and Eddie Stanky failed to cover second,” a correspondent observed.11

With the Yankees up 13-1, the rest of the game seemed to offer little suspense, but two plays of interest transpired, both involving Woodling. First, he tried for an inside-the-park homer after belting a pitch to right-center field in the top of the ninth but was thrown out, Hartung to Stanky to Wes Westrum.

Woodling’s glove work in the bottom of the ninth made a more positive contribution. With one out, he ran into left-center and “made a magnificent catch when he grabbed Monte Irvin’s smash after a desperate run and a frantic leap in the ninth inning, robbing the Giant of a chance to tie the World Series record for total hits.”12

After Irvin was retired, Whitey Lockman grounded out, Rizzuto to Collins (who had moved in from right field), to end the game. Lopat had cruised with the big lead, retiring the final 10 Giants and keeping the Giants’ fly balls—DiMaggio and Woodling combined for eight putouts—safely away from the Polo Grounds’ dangerously close fences.

Most observers thought that the Yanks merely needed to show up to close out the Giants the next day at Yankee Stadium, a sentiment summarized by columnist Arthur Daley in the New York Times: “If the Giants had to get some bad baseball out of their system, this was the time to do it. As a matter of fact they haven’t much time because the clock is running out on them. Midnight is approaching for Cinderella.”13

In addition to the sources cited in the Notes, the author also consulted Baseball-Reference.com and Retrosheet.org for pertinent information, including the box scores.

9 Perhaps the double proved that Durocher had the right idea if the wrong outcome by walking Mize earlier in the game. Stengel on pitching to Mize: “I don’t think Durocher was wrong to pass Mize to get at McDougald in the third inning. I would have done the same thing. It was a wise move. … Maybe Mize would have hit one. Maybe Mize might have knocked in only one run.” Dawson.