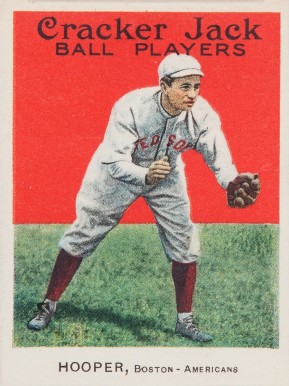 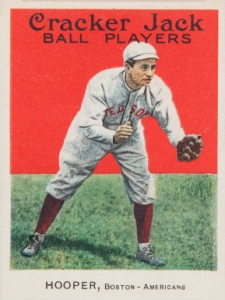 “The Boston Red Sox scored only 12 runs in the five games of the 1915 World Series, but they won three games in the ninth inning and won all four games by just one run.”1

In the first four games, the Red Sox scored seven runs. In Game Five, they scored five. And they did indeed win the game – and the World Series – in another one-run game, another game won in the ninth inning.

The Phillies had won the first game of the 1915 Series, but now their backs were to the wall. Phillies skipper Pat Moran started Game Two starter Erskine Mayer again. Boston manager Bill Carrigan countered with Rube Foster, who’d beaten Mayer but only by a 2-1 score.

After three consecutive games, each won by Boston by the same 2-1 score, all of a sudden there were four home runs banged out of Baker Bowl. Twice the Phillies took two-run leads in Game Five, but the Red Sox rallied each time.

Though Harry Hooper singled on Mayer’s first pitch of the game, nothing came of it. After Everett Scott’s bunt attempt produced a popup to Fred Luderus at first base, Tris Speaker then grounded into a forceout at second base. Speaker tried to steal second but was caught for the third time in the Series.

The Phillies jumped out to a quick lead by scoring twice in the bottom of the first. Foster hit Milt Stock with a pitch. On a hit-and-run, Dave Bancroft singled and there were men on first and second. Dode Paskert laid down a perfect bunt and was ruled safe on a close play at first, loading the bases with nobody out. Both Babe Ruth and Carl Mays started warming up on the sidelines.

Gavvy Cravath strode to the plate. His 24 home runs led the majors and were 10 more than the entire Red Sox team managed in 1915. But Cravath had batted in only one run in the prior four games of the World Series, after his 115 regular-season RBIs had led both leagues. If there was a time for him to come through, this was it.

Instead he hit a “weak little grounder”2 right back to Foster, who threw home to catcher Pinch Thomas, who forced Stock at home plate and then threw to first to get Cravath. A 1-2-3 double play. Two outs. Philadelphia Inquirer writer Jim Nasium lamented that the “Home Run King” had gone for a squeeze rather than slugging the ball, a “swinging bunt.”3

Fortunately for Philadelphia, Luderus came through with a double to left-center field and the Phillies were up 2-0.

In the top of the second inning, Red Sox shortstop Larry Gardner hit a two-out triple to the center-field fence. Jack Barry singled him in with a Texas Leaguer over Stock’s head and into short left field, and the Red Sox had cut the lead in half.

Foster had regrouped. Two Phillies struck out in the bottom of the second and another hit a popup to third base.

Boston tied the game in the third, thanks to a Hooper homer. It was one of the bounce variety – hopping right over the players’ entrance gate in center field for a home run.4 As in the 1912 World Series, a hit of this sort was not a ground-rule double as it would be today but counted as a home run. Suddenly it was a 2-2 game.

After Speaker hit a one-out single, Moran pulled Mayer and brought in the left-handed Eppa Rixey (11-12 during the season, but with a 2.39 ERA) to pitch to Dick Hoblitzell. It was the first and only time in the 1915 World Series that either team used a relief pitcher. Carrigan had Del Gainer pinch-hit for Hoblitzell, but Gainer grounded into a double play to end the inning.

Each team got one man on base its next time up, but the next two runs scored were for the Phillies in the bottom of the fifth. Cravath whiffed but Luderus homered over the 35-foot-high right-field wall – “the longest hit that has been made in the series. The ball sailed over into Broad Street.”5

Then Bert Niehoff singled to center and Ed Burns singled to right. Niehoff took third on Burns’s single and scored the fourth Phillies run when Hooper’s throw to third sailed past Gardner and hit off the grandstand. At first Niehoff held up at third, but when Gardner frantically scrambled to retrieve the ball, he ran home. Catcher Thomas had to lunge for Gardner’s wide throw, leaving the plate uncovered – and an alert Niehoff scored. Hooper was assessed an error. The Phillies had taken another two-run lead: 4-2.

For the next three innings, neither team scored. Foster tried to kick things off with a leadoff single in the fifth and when Hooper was hit by a pitch, the Red Sox had two men on and no one out. But Rixey squelched the threat. Boston got two on in the sixth, too, but to no avail. The Phillies also got men on in the middle innings, but Bancroft was caught stealing in the fifth and Luderus was caught stealing in the sixth.

The only man from either team to reach in the seventh was Rixey, who singled but was stranded.

The Phillies held the 4-2 lead from the fourth inning to the eighth.

In the top of the eighth, after Gainer reached on an infield single, a ball that Stock seemed to have corralled but then “just as his hands stretched forth the ball took an ugly bound.” He recovered it and fired it to Luderus at first, but it was “just a fraction too late.”6 Duffy Lewis hit a home run into the left-field bleachers, tying the game at 4-4.

After two outs in the bottom of the inning, the Phillies gave the Red Sox a scare. Foster pitched around Cravath and walked him. Oscar Dugey pinch-ran for the disappointing Cravath, taken out of a game still tied. Cravath was later dubbed a “fallen idol among the Quakers.”7 Foster then hit Luderus with a pitch, but Carrigan stuck with his pitcher and Foster induced Possum Whitted to hit a comebacker.

Foster was up first in the top of the ninth. Carrigan had still not given Babe Ruth more than the one pinch-hit at-bat back in Game One. He let Foster hit (he was 4-for-7, with one RBI in the Series, the game-winning RBI in Game Two), but Foster struck out. Harry Hooper swung on an 0-and-2 count and again bounced a ball that “hit in front of the low fence and bounded into the multitude” – into the temporary bleachers in right-center field for his second home run of the game. He’d hit two homers all season long and now two in this one game.

Foster didn’t let a ball out of the infield in the bottom of the ninth. He struck out Niehoff. Burns grounded to first base, unassisted. Bill Killefer pinch-hit for Rixey. He grounded out, short to first.

Foster won the game, while the Red Sox won the World Series with the 5-4 finish.

Though taking a World Series, four games to one, may have suggested a bit of a rout, Game Five was the fourth game in a row won by just one run. And the Phillies’ win in Game One was just a 3-1 victory, with the decisive runs scoring in the bottom of the eighth. Any one of the games could have gone the other way very easily. Philadelphia pitchers held the Red Sox to 2.27 earned runs per nine innings, but Boston’s 1.84 ERA made a big difference. The Red Sox hit better, too: .264 to a weak .182 for the Phillies.

All the home runs hit in the 1915 World Series came in this final game, three of them by Boston’s batters. Luderus was the star for the Philly offense, driving in six of their nine runs in the Series. “His bat alone put the Phillies in the game at all,” wrote the Chicago Tribune’s I.E. Sanborn.8 Duffy Lewis drove in five of Boston’s 11 runs and Hooper drove in three. Both managers spoke highly of the other, but Moran admitted, “When you are beaten four in a row, there isn’t any excuse to offer. … [T]hey naturally should be regarded as the best ball club in the country.”9

It was an odd World Series in that Boston manager Bill Carrigan never pitched Smoky Joe Wood (due to a shoulder injury) or Babe Ruth (“deemed too young”).10 Wood was the American League leader with his 1.49 ERA and a 15-5 record. And Ruth was 18-8 (2.44) as well as Carrigan’s leading home-run hitter (albeit with just four home runs all year).

3 Jim Nasium, “Phils Throw Away Chance for Win,” Philadelphia Inquirer, October 14, 1915: 12. He pulled no punches, calling it “without a doubt the most pitiful display of baseball brains that we have ever witnessed on any such important occasion.”

10 Jane Leavy wrote that Ruth, 20, had been “deemed too young to trust in such crucial games.” Jane Leavy, The Big Fella (New York: Harper & Row, 2018), 156. Leigh Montville wrote that Ruth was said to have been disappointed that he hadn’t been used, though it wasn’t a great surprise. Montville wrote, “Carrigan said years later that he never pitched Ruth because he simply had other, better pitchers at the time. He preferred right-handed pitchers against the slugging Cravath of the Phillies. Montville rejected the longtime rumor that Ruth never pitched in the Series due to disciplinary problems.” Leigh Montville, The Big Bam (New York: Doubleday, 2006), 52.