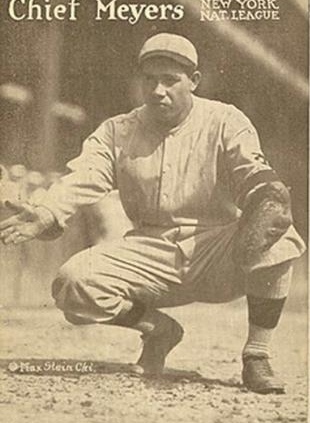 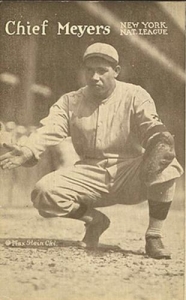 The sixth game of the 1912 World Series was the one that produced the most controversy. Rube Marquard was the obvious choice for the New York Giants, after his 2-1 victory over Boston in Game Three, but there was some concern that “Marquard’s arm has gone awry.”1 If so, John McGraw would probably turn to Doc Crandall or Red Ames in relief.

Red Sox fans wanted manager Jake Stahl to go for the throat by starting Smoky Joe Wood, but word was that owner Jimmy McAleer had ordered Stahl to start Buck O’Brien and save Wood to pitch – if necessary – in Game Seven at Fenway.2 It wasn’t bad strategy, but with a Sunday day off before Game Six, Wood had had a couple of days’ rest and the Red Sox players smelled blood. They wanted a win, and even though O’Brien had pitched well enough in Game Two, he’d still lost. And even though he’d won 20 games in the regular season, Wood had won 34, with 10 shutouts.

Glenn Stout and Dick Johnson contend in Red Sox Century that McAleer “was a shrewd businessman who knew the value of the gate he and his partners would collect if Wood were to start an additional game at Fenway Park.”3 And with Boston leading in the Series three games to one, victory did seem assured, which may have left the Red Sox owner “both confident enough and greedy enough to gamble near-certain victory and a world championship for a chance at another lucrative Fenway payday.”4

Tim Murnane predicted in the Globe the morning of October 13 that “Joe Wood might have gone in tomorrow had the Red Sox lost out yesterday but now the chances are that they will have O’Brien for a starter … keeping a face card back in Joe Wood for the game here on Tuesday, if necessary.”5 Hugh Fullerton’s syndicated column also foresaw Wood held in reserve with O’Brien and Ray Collins ready to go. Wood, he said, might benefit from an extra day of rest, given how “nerve straining” his two victories had been.6 The Associated Press predicted that Collins would start, but agreed that Wood would be held in reserve.7 Several of the players writing bylined columns expected O’Brien or perhaps Collins.

Stahl argued but lost the debate – O’Brien would start for Boston. When the players heard the news, their dreams of a quick wrap-up to the Series were deflated.8 Perhaps with a little hyperbole, Stout and Johnson suggest that “by the time they reached the Polo Grounds the Red Sox were already a beaten ballclub.”9

The Royal Rooters felt otherwise; they were hoping for a Series-clinching win at the Polo Grounds. Fully 500 of them boarded a special train for New York, accompanied by Boston Mayor John F. Fitzgerald and a musical band.10

The Red Sox did little against Marquard in the first inning. Although he gave up a single to leadoff hitter Harry Hooper, he then picked him off first base. Initially, it looked as though O’Brien would escape the bottom of the first unscathed as well. Josh Devore grounded out. Larry Doyle singled, a slow hit to second baseman Steve Yerkes, and then stole second. O’Brien struck out Fred Snodgrass for the second out. Red Murray singled to deep shortstop – another infield hit – but Doyle held at third base.

Then O’Brien balked. Doyle was waved home and Murray was sent to second. Did the balk unnerve O’Brien? Stout and Johnson suggest he might have drunk too much the night before, not expecting to be given the ball, though the press consensus that he was one of the two likely starters undermines that notion.11 Not intimating inebriation, Tim Murnane nonetheless wrote that O’Brien “wobbled around the box” and wondered in print why the pitcher was not immediately pulled by Stahl.12

Nevertheless, and all of a sudden, the dike broke. Fred Merkle doubled against the wall in right, scoring Murray. Buck Herzog doubled down the third-base line, sending home Merkle. Catcher Chief Meyers singled, yet another infield hit.

With runners on first and third, New York called for a double steal. Herzog pilfered home with the fourth Giants run, while Meyers not only stole second but also took third on Yerkes’ error. Shortstop Art Fletcher bunted, the ball landing between third base and the mound, squeezing in Meyers from third base. O’Brien finally brought the inning to a conclusion by picking off Fletcher – but five runs were in. The Giants never scored again, but they didn’t have to.

The Red Sox immediately struck back for two runs in the top of the second. Marquard fumbled Larry Gardner’s grounder. Jake Stahl singled on a shot to center, with Gardner taking second. Heinie Wagner and Hick Cady both made outs, a strikeout and a foul to the catcher.

With O’Brien due up, Stahl put in Hack Engle to pinch-hit; he doubled off the wall in left to drive in both Gardner and Stahl. Harry Hooper popped up to the catcher, foul.13 The Red Sox had cut the deficit to 5-2, but neither they, nor the Giants, would dent the scoreboard after that.

Ray Collins took over pitching duties for the Red Sox in the bottom of the second inning and pitched very well. He scattered five hits over seven innings. There were two singles in the Giants’ third but both hitters erased themselves – Murray by trying to stretch his single to a double and Merkle by unsuccessfully trying to steal second. Meyers was the only Giant to reach third base against Collins but was stranded there after his one-out triple in the fourth.

The Red Sox hit two long drives off Marquard in the top of the third, but both were caught. An inning later, Snodgrass’s “remarkable jumping catch” robbed Wagner of a homer near the wall in center field.14 The Red Sox also had a couple of singles in the fourth, but Collins hit into an inning-ending double play. There were more long balls hit, and a few hard-hit grounders, but the Red Sox got only one hit in the final five innings, a single by Yerkes in the eighth. The Giants closed out their 5-2 win. They now trailed the World Series three games to two.

Murnane wrote that the first inning alone took 33 minutes to play, but the remainder of the game was completed in an additional 85 minutes, for a total time of 1:58. A crowd of 30,622 was in attendance.

As was common at this time, participants from both teams shared their views in ghostwritten columns. Jeff Tesreau asserted that the Red Sox “had none of the ginger that had characterized them in the other games, and if I am not mistaken, they have shot their bolt.” He thought they’d been too eager to wrap it up, and were now “beginning to stagger.”15 That was the theme of McGraw’s piece as well; his nationally syndicated article about his Giants ran in the New York Times under the headline “Team Has Struck Its Stride.”16

Christy Mathewson offered insight into the Giants’ decisive first inning. He indicated that two coaches were riding O’Brien from the lines. He revealed that McGraw had signaled for a double steal with runners on first and third, but O’Brien’s run-scoring balk rendered that academic. “The balk beat O’Brien,” Matty wrote. “He could not come back. He just caved in, and right there our luck changed; we got all of the ‘breaks’ and, with two out, we gave O’Brien a harder whaling than any other pitcher had received in the Series.”17

Red Sox Century says Joe Wood’s brother Paul, “enraged at losing one hundred dollars on the game, sought out O’Brien and blackened one of the pitcher’s eyes in a wild fistfight. Although the incident was widely reported and later denied, the team was clearly in trouble.”18

With an extra day of rest, though, Smoky Joe had the opportunity to close it out before the home crowd in Game Seven. Murnane reported that the Red Sox left New York “confident that they will win the game tomorrow.”19 The Boston rooters at the game didn’t seem the least discouraged; they staged an animated snake dance around the Boston bench and then paraded left to right, back and forth, making for the exits with the band blaring and shouts of “Tomorrow we’ll show them!”

8 Troy Soos said McAleer’s dictate “caused a rift between McAleer and Stahl that never healed.” Before the Curse, 139.

11 Citing rumor, Stout and Johnson even suggested a conspiratorial thought, that McAleer might have wagered on the Giants for Game Five, and even picked up O’Brien’s bar tab. Red Sox Century, 87.