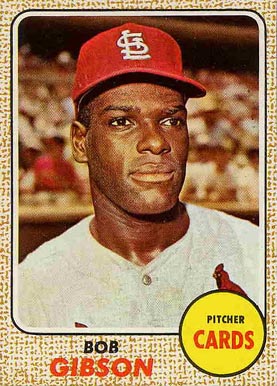 Press previews of the opening game of the 1968 World Series understandably focused on the two starting pitchers.1 In what by midseason had been called the “year of the pitcher,”2 Detroit’s Denny McLain finished with a 31-6 record to become the first 30-game winner in 34 years,3 while Bob Gibson of the St. Louis Cardinals posted a 1.12 ERA, the lowest since the Deadball Era,4 and led the National League with 268 strikeouts and the majors with 13 shutouts.

The contest proved to be a one-sided affair, however. On a hot, muggy afternoon in St. Louis, Gibson struck out 17 to set a World Series record and shut out Detroit 4-0, allowing five hits and walking one.5 McLain, plagued by control problems that began as he warmed up in the bullpen,6 was lifted for a pinch-hitter after five innings with the Tigers trailing by three runs.

Afterward, in the quiet Detroit locker room, manager Mayo Smith summed it up: “Gibson’s a helluva pitcher — that’s the story of this game.”7 McLain, who before the Series said he wanted to “demolish” and “humiliate” the Cardinals,8 called it “the greatest pitching performance I’ve seen in my life.”9 Yet St. Louis manager Red Schoendienst said Gibson could have had two or three more strikeouts if he hadn’t hung some pitches.10

“I think I surprised [the Tigers] by throwing so many breaking pitches,” Gibson told reporters. “I imagine their scouting reports said I threw mostly fastballs. But I had good breaking stuff today, so I went to it.”11 Years later, reviewing a videotape of NBC’s telecast of the game, Gibson identified 85 fastballs, 50 sliders, and eight curves — a roughly 60/40 split between fastballs and breaking pitches.12

The St. Louis right-hander struck out seven of the first nine hitters he faced, put at least one “K” in the scorebook in every inning, and recorded at least two strikeouts in six innings, striking out the side in two of them. He fanned everyone in the powerful Detroit lineup, plus pinch-hitter Eddie Mathews. Twice he victimized left fielder Willie Horton, catcher Bill Freehan, and center fielder Jim Northrup, who combined for 82 home runs in the regular season. Three times he struck out first baseman Norm Cash, who had hit 25 homers, and veteran right fielder Al Kaline, a future Hall of Famer. “I can’t ever remember Al Kaline striking out three times in one game,” his manager said.13

The Tigers had runners in scoring position only once, in the sixth inning. With one out, second baseman Dick McAuliffe singled on a first-pitch fastball for Detroit’s third hit of the game.14 Gibson struck out Mickey Stanley, the Gold Glove center fielder whom manager Smith had shifted to shortstop for the World Series to replace the light hitters who had been sharing the position, Tommy Matchick and Dick Tracewski. The move, which a Detroit writer called “the biggest gamble in Series history,”15 enabled Smith to add another power hitter to his potent lineup: Kaline, the veteran right fielder who had been injured during much of the regular season. Northrup, who had been substituting for Kaline, replaced Stanley in center. Smith called the new look his “Gibson lineup.”16

The strategy seemed to pay off in the sixth when Kaline, a right-handed hitter, followed Stanley’s strikeout by driving Gibson’s first pitch, a slider that caught too much of the plate, down the left-field line for a double. However, Lou Brock cut off the ball short of the warning track to stop McAuliffe at third. With a base open, the left-handed Cash coming up, and the right-handed Horton on deck, catcher Tim McCarver met Gibson on the mound to discuss the situation. Rather than pitch Cash carefully and perhaps walk him, they agreed to “go after” the Detroit first baseman.17 Gibson did so and struck out Cash on four pitches, the last a four-seam fastball resulting in a swing and miss.

During the regular season, Gibson suffered from lack of run support — how else to explain his nine losses (with 22 wins) and a 1.12 ERA — and in Game One the Cardinals again seemed hesitant to score with their top pitcher on the mound. McCarver’s one-out triple in the second inning was wasted, as McLain struck out the next two hitters. Brock was likewise stranded in the next frame, having stolen second with two outs and advanced to third when Freehan’s throw sailed into center field.

But Gibson got all the runs he needed in the fourth inning, in part because of McLain’s lack of control. The Detroit pitcher walked right fielder Roger Maris on four pitches. After retiring first baseman Orlando Cepeda on a full-count pop foul, he walked McCarver without throwing a strike. Mike Shannon, the St. Louis third baseman, followed with a single to left field, where Horton, apparently thinking he had a play on Maris at the plate, charged the ball but let it get past him. Maris scored easily, McCarver advanced to third on the error, and Shannon went to second when Horton made an ill-advised throw to third. With the Detroit infield drawn in, second baseman Julian Javier lined McLain’s first pitch past Cash into right field to drive in both runners. The score remained 3-0 until Brock homered with two outs in the seventh off reliever Pat Dobson, who had replaced McLain in the previous inning.

From there, all the drama was in Gibson’s right arm. Through six innings, he had 11 strikeouts. He added two in the seventh as Northrup and Freehan went down swinging on sliders. In the eighth, he picked up another when Mathews, batting for third baseman Al Wert, swung weakly at another slider. Gibson needed one in the ninth to tie and two to break the record of 15 set by Sandy Koufax, five years earlier to the day, in a 5-2 Series win over the Yankees.18

Leading off the final frame, Stanley made Gibson work by fouling off six pitches before singling to center on a 2-and-2 fastball for his second hit. With Kaline, Cash, and Horton coming up, Detroit fans were no doubt hoping for another late-inning rally. In the regular season the Tigers had 15 walk-off wins, 13 more in their last at-bat, and 12 others in which they trailed in the seventh inning or later.19

Kaline fell behind 1-and-2, fouled off the next two pitches, and swung and missed on a slider. Gibson was unaware that he had tied Koufax’s record until McCarver stepped in front of the plate and pointed to a scoreboard message as the fans stood and cheered.20 He broke the record when Cash, after fouling off three pitches, took a big cut at a 2-and-2 slider. “I knew I was 16,” Cash said in the locker room. “That doesn’t bother me. Striking out three times does.”21

For good measure, Gibson ended the game by striking out Horton, who took a 2-and-2 slider that, as Roger Angell wrote, “seemed headed for his rib cage but … broke abruptly away under his fists and caught the inside corner of the plate.” McCarver told Angell years later, “I’ll bet Willie Horton thinks to this day the ball hit him — that’s how much it broke.”22

The last pitch marked Gibson’s sixth consecutive World Series victory,23 equaling the streaks of Yankees’ Lefty Gomez (1932, 1936-1938) and Red Ruffing (1937-1939, 1941-1942). He broke that record in Game Four, a 10-1 win in which McLain again took the loss. All seven of Gibson’s victories were complete games. And with 10 strikeouts in Game Four and eight more in Game Seven, Gibson set a new record of 35 strikeouts in a single World Series, passing his own mark of 31, set the previous autumn against the Red Sox.24

But Gibson lost Game Seven, 4-1, to Mickey Lolich, in large part because of a rare misplay by his close friend Curt Flood, the center fielder who that season won the sixth of his seven consecutive Gold Gloves.25 And when Gibson looked back on 1968, it was Game Seven that this fiercest of competitors recalled most vividly.26 If it is any consolation, however, he won the National League’s MVP and Cy Young Awards that year,27 and his strikeout record set in Game One remained in place more than 50 years later.28

3 Dizzy Dean won 30 games for the Cardinals in 1934. Three years earlier, Lefty Grove had 31 wins for the Philadelphia Athletics.

5 The 17 strikeouts were also a career high for Gibson. His previous best was 15 five weeks earlier in a 6-4 loss to the Pirates that he said was probably his worst outing of the season. Bob Gibson and Lonnie Wheeler, Pitch-by-Pitch: My View of One Unforgettable Game (New York: Flatiron Books, 2015), 193-94. The St. Louis franchise record is 19, set by Steve Carlton, and the major-league mark is 20, shared by Roger Clemens (Red Sox), Kerry Wood (Cubs), and Max Scherzer (Nationals).

11 “Gibson Depends on Curves, Sliders and Hurls ‘One of My Best Games,’” Philadelphia Inquirer, October 3, 1968: 35. Al Kaline confirmed Gibson’s analysis. “He surprised me with his slider,” Kaline said. “He had a real sharp one. Our scouting report said he went mostly with the hard stuff.” Ed Wilks, “‘Gibson Will Be Tougher’ — Kaline,” St. Louis Post-Dispatch, October 3, 1968: 3C.

12 Gibson and Wheeler. The total of 143 pitches is one less than the number found in contemporaneous press accounts. E.g., Russo, “Gibson’s Pitches Slide by Tiger Batters.” The discrepancy stems from the omission of some pitches from the NBC telecast, apparently because the network was slow in returning from a commercial break in the top of the eighth, with Eddie Mathews pinch-hitting for Don Wert. (This gap between a commercial and the return to play is evident in the video of the Canadian telecast, which carried the NBC feed; unlike MLB Vault’s version of the video, the Canadian video includes commercials.) After Matthews fouled off the first pitch that is shown, broadcaster Harry Caray stated the count as 1-and-2. Gibson and Wheeler assumed that NBC missed two pitches and proceeded to reconstruct Gibson’s pitch selection. Pitch-by-Pitch, 191-92. But if the count was 1-and-1 before NBC returned viewers to the game, there could just as well have been three missed pitches: a strike, a foul, and a ball. Were that the case, Gibson’s pitch total would have been 144, as reported in the press immediately after the game.

14 Throughout this article, the counts and pitch descriptions are taken from Gibson’s account of the game in Pitch-by-Pitch.