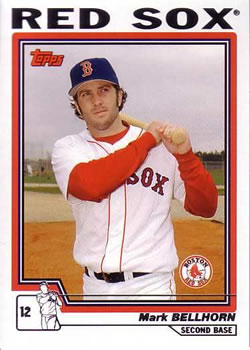 The Boston Red Sox certainly had momentum on their side as they headed into the 2004 World Series. They also had an unfortunate history of failing to close the deal when it came to winning world championships; it had been 86 years since the team had last won it all and they had lost in Game Seven the last four times they had gotten that far: 1946, 1967, 1975, and 1986.

It had been 18 years since they were in the World Series.

The momentum came from their historic accomplishment in the 2004 American League Championship Series: Having lost the first three games (the horrific Game Three loss by the score of 19-8), they then rallied and pulled off four consecutive wins — each one, by definition, an elimination game in the best-of-seven ALCS) — something no other baseball team had ever accomplished. Having vanquished their arch-enemies, the New York Yankees, they now had to face the National League pennant-winners, the St. Louis Cardinals. And Cardinals teams had dealt Game Seven defeats to Boston in both the 1946 and 1967 World Series.

The Cardinals had dominated the NL Central, with 105 regular-season wins, finishing a full 13 games ahead of second-place Houston. They’d beaten the Los Angeles Dodgers, three games to one, in the Division Series, then fought hard for a win over the Astros in the NLCS, taking Game Six in 12 innings and then winning Game Seven. Both Boston and St. Louis were battle-tested.

Some of the Red Sox were brimming with self-confidence. After it was all over, Dave Roberts said of St. Louis, “It didn’t matter who we faced at that point. We were going to go right through them. We had something special going. We weren’t going to be denied a championship.”1

Game One was played on a Saturday night at Fenway Park. Manager Tony La Russa’s Cardinals started veteran right-hander Woody Williams; he’d had an 11-8 (4.18) season, but the team’s best pitcher, Chris Carpenter, was unavailable because of pain in the biceps of his throwing arm, and the others needed more rest after the NLCS. Williams was hit for four runs in the bottom of the first.

Tim Wakefield had started for the Red Sox. It was particularly special for the knuckleballer to open the World Series because he’d been the victim of Aaron Boone’s extra-inning home run in Game Seven of the 2003 ALCS, which had denied that year’s “Cowboy Up” Red Sox from making it to the World Series. This year’s edition of the Red Sox were the “Idiots.” Wakefield, like Williams, was likewise not one of his team’s top pitchers. He was 12-10 (4.87), but he got through the first with only a double by Larry Walker.

Williams, on the other hand, faced leadoff batter Johnny Damon and threw him 10 pitches, the 10th one laced into the left-field corner for a double. Then he hit Orlando Cabrera. He got Manny Ramirez to fly out to right, Damon tagging and taking third. David Ortiz hit a three-run homer to right field, right over (but just inside) the foul pole, giving the Red Sox a quick 3-0 lead. It was maybe 18 inches fair, Ortiz showed, holding his hands apart after the game.2 Kevin Millar then doubled to left, high off the wall, moved up on Trot Nixon’s fly ball, and scored on a single by Bill Mueller.

With one out in the bottom of the third, the Red Sox worked two walks around a single and had the bases loaded for Damon, who singled in one run. The bases still loaded, La Russa turned to Dan Haren to replace Williams. The outing was Williams’s shortest in 2004. The first batter Haren faced was Orlando Cabrera, who singled off the left-field wall and drove in another run. Manny Ramirez grounded into a force out at second base, and another run scored. It was 7-2, Red Sox.

In the top of the fourth, given adverse weather conditions and consequent difficulty getting a good grip on the ball, Wakefield walked three batters (there was a passed ball in there, too).3 Catcher Mike Matheny’s sacrifice fly scored one, and the relay throw from first to third went wild, allowing another run to score. Left fielder So Taguchi grounded out third to first, but drove in a run in the process. It was 7-5, and after Wakefield walked another batter, Boston manager Terry Francona brought in Bronson Arroyo to relieve. He got out of the inning and set down St. Louis one-two-three in the fifth.

In the sixth, St. Louis tied the score. After two outs, Taguchi singled. Shortstop Edgar Renteria doubled to center, driving him in, and then Walker doubled to right — his fourth hit of the game — likewise driving in Renteria.

The Red Sox edged back in front, 9-7, in the bottom of the seventh. Kiko Calero was pitching in place of Haren. He walked Mark Bellhorn and Cabrera, with an out in between, then gave up an RBI single to Manny Ramirez. Manny had driven in 130 runs in the regular season, but not one during all seven ALCS games against the Yankees. Ray King replaced Calero and then David Ortiz hit a hard shot that bounced once and struck second baseman Tony Womack in the collarbone, caroming into shallow right field and easily bringing in Cabrera. Womack had to leave the game, replaced by Marlon Anderson. For Ortiz, it was his 19th run batted in during the 11  postseason games played in 2004 to date.

Mike Timlin had pitched the seventh for the Red Sox without a runner reaching. He gave up a one-out single in the top of the eighth, and Francona called on Alan Embree to relieve. Roger Cedeño pinch-hit for Taguchi and singled to right. With runners on first and second, Francona called in his closer, Keith Foulke. It was the fifth time in the 2004 postseason that Foulke had been asked to pitch more than one inning. Renteria singled in one run. 9-8. Manny Ramirez’s spikes caught in a drainage plug and he flubbed picking up Larry Walker’s ball hit to left field, and the tying run scored, the throw home just a moment too late. It was knotted up again, 9-9. Foulke intentionally walked Albert Pujols, loading the bases. There was still just one out, but he got Scott Rolen to pop up to third and then struck out Edmonds.

In the bottom of the eighth, Julian Tavarez took over on the mound for the Cardinals. Bill Mueller grounded out, and Jason Varitek (pinch-hitting for catcher Doug Mirabelli) hit a grounder, too, but it took a bad bounce and Renteria couldn’t haul it in. It was ruled an error on a call that could have gone either way. It was the only error of the game for the Cardinals, while the Red Sox had committed four. Mark Bellhorn then hit a two-run homer that hit off the foul pole in right field. It was 11-9, the Red Sox on top.

Bellhorn had now homered in three consecutive postseason games — Games Six and Seven of the ALCS and now Game One of the World Series.

In the ninth, Foulke struck out Reggie Sanders, surrendered a double to Marlon Anderson, got Yadier Molina to pop up to first base, and then struck out Cedeño. Game over.

The game had lasted exactly 4 hours. The Red Sox had taken Game One.

“He’s our unsung hero,” said Kevin Millar. “The guy has 40 doubles and drives in 80 runs, yet he’s never really talked about. That guy is just amazing. And yet he always stays the same. His demeanor never changes.”5

The players weren’t about to come down on Manny, though. This was, after all, the team known as the “Idiots.” Dave Roberts said, “We were laughing at him during the game. That’s why this team is so special. There’s no reason to get down on a guy for trying. He was just demoted from silver to bronze to green glove, that’s all.”6

Johnny Damon stated the obvious, realizing the Red Sox might have been fortunate to escape with a win, given the four errors. “We have to tighten things up out there. We can’t do this again and expect to win because that puts a lot of pressure on our pitching staff and our hitters.”7

In addition to the sources cited in the Notes, the author consulted Baseball-Reference.com, Retrosheet.org, and a YouTube video of the game.

1 Dave Roberts, author interview, in Allan Wood and Bill Nowlin, Don’t Let Us Win Tonight — An Oral History of the 2004 Boston Red Sox’s Impossible Playoff Run (Chicago: Triumph Books, 2014), 213. The book contains several similar quotes from other Red Sox players. GM Theo Epstein said, in another author interview, “We all felt like no matter who we played or what came next, we would handle it. And we had spent a lot of time building up our advance scouting operation.” Of their advance meeting, he added, “You never want to get too optimistic in baseball, but it seemed that after that meeting, not only did we have momentum and emotion and brotherhood and everything else on our side, but we also had a really good technical matchup against their pitching. Wood and Nowlin, 215-16.