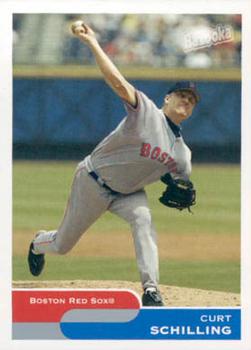 The matchup was Curt Schilling for Boston against Matt Morris of St. Louis. Schilling had been 21-6 (3.26) in the regular season, but had suffered a serious ankle tendon injury in the playoffs that looked to keep him out of the postseason. Team doctor Bill Morgan performed temporary surgery to hold the tendon in place; seepage through his sanitary stockings in Game Six of the ALCS led it to be known as the “Bloody Sock Game.” The ankle had been sutured again and Schilling was ready for World Series Game Two. It was a return to the Series for Big Schill; he and Randy Johnson had shared MVP honors in the 2001 World Series when the Arizona Diamondbacks beat the New York Yankees.

“Don’t kid yourself, I’m terrified,” Schilling said the day before. “That’s part of the motivation, the fear of failure. I always felt good players use the fear of failure in a positive way.”1 He fully expect the Cardinals to bunt on him, to test his ankle.

The morning of the game, Schilling had a scare and didn’t think he was going to be able to pitch at all. He woke up a few hours early, in pain. “I felt like my leg was in a fireplace. I rolled the cover back, and my right ankle was swollen as thick as my right calf. And it was red, very red. It was so sensitive. Just the covers touching it hurt. … I couldn’t walk.” Driving to the ballpark, “I was trying to drive with my left foot because I couldn’t use my right foot. … There was no way I was going to pitch.”2 But Dr. Morgan quickly diagnosed the problem and removed an extra stitch he had placed, which had punctured a nerve. Once removed, the problem almost instantly went away. And Schilling was able to pitch.

St. Louis first baseman Albert Pujols doubled off Schilling in the top of the first but was the only Cardinal to reach base. In the bottom of the first, Morris got center fielder Johnny Damon and shortstop Orlando Cabrera to ground out, but then walked sluggers Manny Ramirez and David Ortiz. (Red Sox batters had drawn eight walks in Game One.) Switch-hitting catcher Jason Varitek batted left-handed against the righty Morris. He hit a ball to the deepest part of Fenway, in the center-field triangle off the edge of the Red Sox bullpen near the 420-foot marker. He had an easy triple, and had given the Red Sox a 2-0 lead. Morris walked Kevin Millar but then got Trot Nixon to ground out.

In the Cardinals’ second, a one-out walk and a single put runners on first and second, but Cardinals catcher Mike Matheny lined into an unassisted double play at third base.

Pujols doubled into the left-field corner to lead off the fourth inning. He tagged up and took third base on a fly to a diving Trot Nixon in right field. After Edmonds struck out, left fielder Reggie Sanders reached base on the second error of the game by third baseman Bill Mueller3 — and Pujols scored. It was 2-1, Red Sox.

In the bottom of the fourth, the Red Sox reasserted themselves. With one out, Kevin Millar was hit by a pitch. With two outs, Mueller — batting left-handed — atoned a bit for his errors with a two-base hit into the right-field corner. Up came second baseman Mark Bellhorn, who’d homered three games in a row. This time he doubled, off the base of the center-field wall, scoring both Millar and Mueller and giving the Red Sox a lead they did not relinquish.

Neither team scored in the fifth. The bumbling Red Sox committed two errors4 in the top of the sixth, but Schilling escaped unscathed. Boston made four errors in Game One and four more in Game Two. Bill Mueller alone committed three of the four in this game.

Boston picked up two more runs in the bottom of the sixth, taking a 6-1 lead. Cal Eldred was pitching; he had come in during the fifth inning and got the last two outs. Now in the sixth, Trot Nixon singled over second base to lead off. After a couple of outs, Damon singled between short and third into left field. Orlando Cabrera drove a ball high off the left-field wall, driving in two runs. Cabrera had to hold up at first base. Manny Ramirez singled but Tony LaRussa called in left-hander Ray King and King struck out David Ortiz to end the inning.

Schilling’s night was over. He’d worked six innings and given up just one unearned run. “You could see he was battling with his ankle,” said Varitek after the game. “We did the right thing getting him out of there.”5 Alan Embree faced three batters in the top of the seventh and struck out all three.

Mike Timlin pitched for the Red Sox in the top of the eighth. He walked Edgar Renteria, who advanced to second base as Larry Walker grounded out, Timlin to first. Pujols singled, putting runners on first and third. Renteria scored on a sacrifice fly by Scott Rolen. Keith Foulke relieved and struck out Jim Edmonds.

In the ninth, Red Sox manager Terry Francona had Gabe Kapler play left field in place of Manny Ramirez. Foulke struck out Reggie Sanders, got Tony Womack to line out to Nixon in right, and then got Matheny to ground out, short to first.

Game Two was in the books, a 6-2 Red Sox win. The Red Sox had left nine men on base. The 3:20 game was a win for Schilling and a loss for Morris. Foulke had now pitched in nine of the 12 postseason games, for a total of 12 innings, without allowing a run.

With the win, Schilling became the first pitcher to ever win three World Series games for three different teams — the 1993 Phillies, then the 2001 Diamondbacks, and now the 2004 Red Sox.

Cardinals pitching coach Dave Duncan said, after the game, “We’re not doing the things that made us successful as a staff this season, plain and simple.”6 Indeed, Cardinals pitchers had walked 14 Red Sox batters and hit three more. Of the 17 runs the Red Sox had scored in the first two games, eight were scored by players who had either walked or been hit. The Red Sox defense might have seemed to be intent on giving games away, but so was the Cardinals pitching staff.

Both teams traveled to St. Louis for Game Three and had an offday on Monday the 25th.

In addition to the sources cited in the Notes, the author consulted Baseball-Reference.com, Retrosheet.org, and a YouTube video of the game.

3 Mueller’s first error came on a foul popup in the second inning.

4 One error was made by Mueller — his third of the game. Bellhorn made the other.