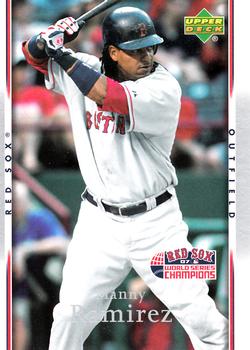 From April 18 on, the Red Sox held first place in the AL East, never to be dislodged. The New York Yankees pressed them in September but finished two games back. Under manager Terry Francona, Boston’s 96-66 record tied the Cleveland Indians for best in the majors. The Red Sox then swept the Los Angeles Angels of Anaheim in the American League Division Series and rallied past the Indians in a seven-game American League Championship Series.

The Rockies, under Clint Hurdle, reached the postseason with one of the greatest stretch runs of all time. On the morning of September 16, the Rockies were in fourth place in the NL West with a 76-72 record. Then they won 11 games in a row, and 14 of their last 15, tying the San Diego Padres for the NL’s second wild-card berth on the regular season’s final day and advancing with a dramatic 13-inning win in the tiebreaker game.

Were they worn out? Not hardly. The Rockies swept the National League Division Series against the Philadelphia Phillies in three games, and they swept the National League Championship Series in four games against the Arizona Diamondbacks. Add up all that winning, and the Rockies came into the World Series with 21 wins in their last 22 games. The last game they lost was almost a month earlier, on September 28. This was a juggernaut of a team.

Red Sox closer Jonathan Papelbon said as much, when told oddsmakers favored Boston: “We’re going into a playoff against a team that’s won 20-freakin’-something games in a row. The playoffs are all about momentum, right? How are we freakin’ favored? How? How?”1

After a pregame ceremony featuring many veterans of the 1967 “Impossible Dream” Red Sox, right-hander Josh Beckett took the mound. He had gone 3-0 so far in the postseason with an ERA of 1.17 and 26 strikeouts in 23 innings.2 He struck out the side in the first inning and the first four Rockies overall.

Colorado started a lefty, Jeff Francis. He’d been 17-9 (4.22) during the season. He’d won one game in each round of the postseason, but with the Rockies’ long layoff between the NLCS and the World Series, he hadn’t pitched in 13 days. He didn’t fare as well as Beckett in the first inning. Dustin Pedroia hit his second pitch out — just out, an inch or two over the red line atop the Green Monster in left field — to become the first rookie to lead off a World Series with a home run.3 First baseman Kevin Youkilis doubled to right-center, with the ball taking a short hop up and bouncing off the front of the Red Sox bullpen. DH David Ortiz was up next; he grounded out to first while Youkilis took third base. Manny Ramirez slapped a single to left, and the Red Sox had a second run. Third baseman Mike Lowell flied out. Catcher Jason Varitek singled between short and third, and Ramirez took second. He scored a third run when right fielder J.D. Drew doubled to right. Julio Lugo grounded out to end the inning.

In the second inning, Rockies third baseman Garrett Atkins’ arcing fly ball hit near the top of the left-field wall on its way down, for a double. With two outs, rookie shortstop Troy Tulowitzki hit an even harder ball to left-center that banged off the wall and drove in Atkins.4 Beckett got catcher Yorvit Torrealba to ground out, short to first, stranding Tulowitzki on second.

The Red Sox answered in the bottom of the second with their fourth run. With two outs, Youkilis walked and David Ortiz doubled him home with a gapper to the wall in left-center.

Neither team scored in the third, nor did the Rockies in the top of the fourth. Boston added another two runs in the bottom of the fourth. With two outs, Ortiz singled to left and Ramirez doubled to right-center. Mike Lowell was walked intentionally. Jason Varitek hit a ball down the left-field line that a fan interfered with; it was declared a double and scored two runs. That made it 6-1.

The Rockies’ DH, Ryan Spilborghs, walked in the top of the fifth but was their only baserunner; no one even got the ball out of the infield.

And Boston banged out seven more runs in the bottom of the fifth. Franklin Morales relieved Francis to start the inning. He was not treated kindly. In two-thirds of an inning, he was tagged for seven earned runs — all coming after two outs. With a runner on second base, Youkilis doubled into the left-field corner, driving in the first run of the seven. Ortiz doubled toward the triangle in center, driving in Youkilis. Manny Ramirez popped a single over Tulowitzki at shortstop, and Ortiz scored. Mike Lowell hit a double into the left-field corner, Ramirez holding at third. Varitek walked on five pitches, loading the bases. Drew singled off Tulowitzki’s glove to score Ramirez.

Hurdle had seen enough of Morales and called on right-hander Ryan Speier. The bases were still loaded. Speier threw 16 pitches; they turned out to be the sum total of his World Series work. He walked Julio Lugo on five pitches, Jacoby Ellsbury on six pitches, and Dustin Pedroia on five pitches. Three runs scored, one at a time, all charged to Morales. In the Boston Globe, Dan Shaughnessy snarkily submitted, “Eddie Cicotte of the 1919 White Sox didn’t do that badly and he was trying to lose.”5

Hurdle called on Matt Herges, another right-hander. Herges threw two pitches and got Youkilis to fly out to right field, finally ending the inning. The score was now 13-1 in Boston’s favor. Gordon Edes wrote in the Boston Globe that when Youkilis flied out, “he kicked the dirt as he rounded first, as if he thought the rally might go on forever.”6

There was no more scoring, by either side, for the rest of the game. Beckett pitched through the seventh before Francona turned to Mike Timlin and Eric Gagne to close out the Rockies.

Beckett, of course, got the win, making him 4-0 in the 2007 postseason. He had been the MVP of the ALCS. All told, including this game, he worked 30 innings with a postseason ERA of 1.20. Of the Rockies, he said, “That’s a good lineup over there. You can tell how hungry they are. I made the pitches when I needed to execute them.” Told how impressive his postseason stats had been, he said, “I hope my teammates are happy. That’s who I’m really here to please.”7

“It wasn’t the layoff,” Francis said after the game. “I felt strong. I just made too many mistakes. There are no excuses.”8

Hurdle added, “You can ask me all Series long about the layoff and I won’t have an answer for you. We’re a no-excuse ballclub.”9

Boston broke the record for the largest margin of victory in a World Series opener, set when the Atlanta Braves beat the Yankees 12-1 in 1996. Nine Red Sox runs had scored after two outs.

It was a blowout, but it was — of course — just one game, Woody Paige of the Denver Post reminded readers: “First rodeo, Rockies? Yes. But the World Series is never over when the first game is over. In 1960, the New York Yankees beat the Pittsburgh Pirates by scores of 16-3, 10-0 and 12-0. Pittsburgh won the world championship on Bill Mazeroski’s home run in the ninth inning of Game 7.”10

And the Rockies had been playing at a disadvantage. Since they had swept the NLCS, wrapping things up on October 15, they had been idle for eight days before Game One of the World Series.

In addition to the sources cited in the Notes, the author consulted Baseball-Reference.com, Retrosheet.org, and a YouTube video of the game. Thanks to Carmen Reale for supplying articles from the Denver Post.

1 Regarding the eight-day layoff between the last game of the NLCS and the first game of the World Series, Dustin Pedroia said, “They’ve been waiting their whole lives to play in the World Series. I don’t think seven or eight days off is going to matter.” Jim Armstrong, “Closer Protests Odds,” Denver Post, October 24, 2007: 2W.

2 In the regular season, Beckett had led the majors with 20 wins. He was 20-7, with a 3.27 ERA. He finished second (to Cleveland’s C.C. Sabathia) in the Cy Young Award voting. Beckett had started the season 9-0, then faced the Rockies in interleague play on June 14 at Fenway, giving up six runs and losing 7-1. The Rockies took two of the three games, outscoring the Red Sox 20-5. Curt Schilling was the other losing pitcher.

3 Pedroia was the overwhelming choice as AL Rookie of the Year, getting 24 of 28 first-place votes.

4 Tulowitzki came in second in Rookie of the Year voting to Ryan Braun.