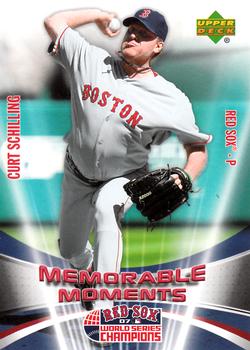 The Boston Red Sox had won three games in a row by spectacular scores — beating Cleveland 12-2 and 11-2 in Games Six and Seven of the American League Championship Series and opening the World Series with a 13-1 triumph over Colorado.

After allowing 17 hits and 13 runs in Game One, the Rockies pitching staff held Boston to just six hits and two runs in Game Two. But that was all the Red Sox needed, with starter Curt Schilling and two rested relievers holding the Rockies to just five hits and — again — only one run.

Bob Ryan wrote in the Boston Globe, “Man cannot live on double-digit victories alone. He needs to pull out on those 2-1 games every now and then, too. There was none of that Bombs Away stuff at Fenway last night. We had ourselves a proper baseball game in which the little things mattered.”1 Of course, the little things were magnified by being on the biggest stage baseball has to offer.

Before Game Two, Rockies manager Clint Hurdle said of the shellacking the Red Sox had administered the night before, “We know exactly where we are. We know exactly what happened last night. We lived it, we wore it, and we’ve showered it off. Short-term memory is very, very important in this game. One of the strengths of our ball club … is the ability to honestly self-evaluate and move on.”2

The Rockies scored in the top of the first, backing up Hurdle’s assessment of their resiliency. The 40-year-old Schilling, with one of the greatest résumés in the history of postseason pitching, hit the leadoff batter, center fielder Willy Taveras.3 One out later, Matt Holliday singled off a diving Mike Lowell at third base. Lowell recovered the ball and flipped it toward third — but no one was covering the bag, so the ball rolled between third and the mound, allowing Holliday to advance to second. Lowell was charged with an error on the throw. Todd Helton grounded to first base; Kevin Youkilis flipped to Schilling covering first while Taveras scored easily.

Ubaldo Jimenez was Colorado’s starting pitcher. A tall right-handed rookie, Jimenez joined the team in the second half of July. He was 4-4 (4.28) in the regular season. He’d started one game in the Division Series and one in the NLCS, giving up just one run in each game. He set down the Red Sox in order in the first.

Neither team scored in the second. Brad Hawpe singled for the Rockies. Jimenez hit a batter.

Jimenez walked two in the third inning. Schilling bore down, too. Heading into the bottom of the fourth, it was still 1-0, Rockies.

The Red Sox tied it up in the bottom of the fourth. After Manny Ramirez popped up to third base, Jimenez walked Lowell. J.D. Drew singled to right field and Lowell took third — just barely diving under an on-the-money throw from Hawpe. Drew took second on the throw. Troy Renck of the Denver Post credited Lowell with deking the Rockies right fielder: “He casually rounded second on J.D. Drew’s single. Hawpe squared up on the ball, rather than charge, and Lowell took off for third, sliding in safely just before the throw.”4 That was one of the “little things” Bob Ryan had mentioned.

Swinging at the first pitch, Jason Varitek (“The Captain”) drove a fly ball to the edge of the warning track in straightaway center. Lowell tagged up and scored easily. Drew advanced to third. Jacoby Ellsbury walked and stole second, but shortstop Julio Lugo grounded out to end the inning.

Troy Tulowitzki led off the Rockies’ fifth by working a seven-pitch walk. Yorvit Torrealba sacrificed him to second, but Schilling struck out Ryan Spilborghs and then got Taveras to ground out to shortstop.

The Red Sox went ahead in the bottom of the fifth. After Dustin Pedroia grounded out and Youkilis flied out, Jimenez walked David Ortiz. He’d given up only one hit, but this was his fifth walk of the game. Two hits followed. Ramirez grounded a single under Garrett Atkins at third base and into left field. Lowell — the only starting position player for the Red Sox who didn’t have a run batted in during Game One — doubled into the left-field corner, driving in Ortiz.5 Hurdle employed relievers Jeremy Affeldt and Matt Herges to close out the inning, but the Red Sox had edged into a 2-1 lead with four innings remaining.

With one out in the sixth, Schilling gave up a single and walked a batter. Manager Terry Francona summoned Hideki Okajima from the bullpen.6 He got Atkins to ground out and struck out Hawpe. Schilling had more than done his part, working 5⅓ innings and allowing just one run. That he had been 9-8 (3.87) in the regular season was now forgiven.7

Ellsbury singled in the sixth. With two outs, Herges walked Youkilis. Hurdle called on his fourth pitcher of the night, Brian Fuentes, who got Ortiz to fly out to center.

The Rockies went down one-two-three in the seventh, with Spilborghs — the designated hitter — striking out looking for the third time.

Okajima struck out the first two batters in the top of the eighth. In an outing that spanned three different innings, he retired all seven batters he faced, four of them with a K. Francona then called on Jonathan Papelbon (who had 37 saves in 2007) to pitch to Matt Holliday.8 The NL batting average and RBI leader hit a bullet up the middle that almost whacked Papelbon. Pedroia dove and knocked it down, but had no play.9 Holliday was 4-for-4 in the game. The rest of the Rockies had a total of one hit: Hawpe’s single back in the second.

Dangerous veteran Todd Helton came to bat with the tying run on first, but the Red Sox had other ideas. With Helton poised for the first pitch, Papelbon threw to first base instead and picked off Holliday to end Colorado’s threat. It was the first baserunner he’d ever picked off since he came to the big leagues. It was another one of the “little things” that made this quite a game, a triumph of advance scouting and bench coach Brad Mills’ pickoff call. Reflecting the region’s obsession with the Red Sox, pretty much an entire Boston Globe article was devoted to the pickoff.10

The Red Sox were hoping for an insurance run or two, but Fuentes retired the first two Red Sox in the bottom of the eighth. Manny Corpas then relieved Fuentes. Pedroia singled to right field, but was retired in a force play at second base.

Papelbon returned to the mound in the top of the ninth. Helton was back in the batter’s box. He struck out on six pitches. Atkins lined out to Ellsbury in center field. Hawpe struck out. Game over.

Credit the Red Sox pitchers, of course, but the Rockies just weren’t hitting. “Two runs in 18 innings in this ballpark,” said Hurdle. “That makes it tough to win. They went out and made pitches, [but] we had some pitches to hit, too.”11

Referring to the Rockies’ magical run to get to the Series, Troy Renck wrote in the Post: “Hawpe stared into space. It was an uncomfortable sight, Rocktober seeming like a long time ago.”12

The first game was 13-1. Game Two was 2-1. Both were wins for Boston. Both teams left for Denver, to play some mile-high baseball in Game Three.

In addition to the sources cited in the Notes, the author consulted Baseball-Reference.com, Retrosheet.org, and a YouTube recording of the game. Thanks to Carmen Reale for providing copies of Denver Post articles covering the game.

3 This game included, the last of his career, Schilling’s postseason record is 11-2 with a 2.23 earned run average. Schilling turned 41 years old a couple of weeks after the 2007 World Series. Tim Wakefield had turned 41 in early August. Sadly, despite winning 17 games for the Red Sox during the regular season — second on the team only to Josh Beckett — Wakefield was prevented by back woes from being added to the postseason roster.

6 Okajima became the first Japanese-born pitcher to appear in a World Series game. This was his first year in the major leagues.

7 Nick Cafardo wrote, “No matter how annoyed the Red Sox might have been that Schilling didn’t take conditioning seriously at the beginning of the season and that it might have affected his win total, you can’t argue with the fact that he’s made the transition from power pitcher to finesse pitcher seamlessly.” Nick Cafardo, “Farewell to Thoughts of Goodbye,” Boston Globe, October 26, 2007: 42.

8 For an appreciation of Okajima in the next day’s paper, see Jackie MacMullan, “Okajima Was Much Better Than OK,” Boston Globe, October 26, 2007: 41. Schilling himself was quoted: “Okajima was perfect, just absolutely perfect — every single pitch. And that’s a hell of a lineup to go through.”

9 Serious injury may have been avoided. Gordon Edes wrote, “The ball appeared to glance off Papelbon’s leg and caused Pedroia, who gloved the ball with a sprawling spot, to writhe in pain after he landed heavily on the left shoulder he’d already dislocated once this postseason.” Gordon Edes, “Roaring and Soaring,” Boston Globe, October 26, 2007: 41, 53. Pedroia had hurt his shoulder, but stayed in the game, during Game Three of the Division Series against the Angels.