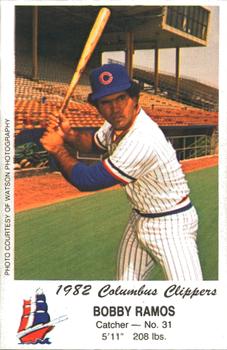 Roberto “Bobby” Ramos was born in Cuba in 1955. Emigrating to Miami, Florida, as a child, he caught for the Jackson High School baseball team. At the end of his senior year, he was named to the All-City team and selected in the seventh round of the June 1974 amateur draft by the Montreal Expos.1

After spending five years in the minors, Ramos was called up by the Expos in September 1978, getting into two games. After that it was back to the minors for a season and a half before being recalled in July 1980. He spent all of 1981 with Montreal but played sparingly behind All-Star Gary Carter, and his major-league career at that point consisted of just 85 plate appearances, one home run, and a .494 OPS.

At the end of spring training in 1982, Ramos was traded to the New York Yankees for another backup catcher, Brad Gulden. The Yankees sent him to their Triple-A farm club in Columbus, bringing him up in August to replace the injured Barry Foote.2 In his first four weeks with the club, Ramos had gotten into only two games, making outs in all seven of his plate appearances.

So Ramos seemed an unlikely candidate to be a hero as the Yankees took the field for the last of a four-game series with the division-leading Milwaukee Brewers on the afternoon of September 12, 1982. Yet, that is just what he was.

The Brewers had come to New York leading the American League East by four games but dropped two of the first three games to the fourth-place Yankees. Hoping to salvage a split, Milwaukee manager Harvey Kuenn called upon 37-year-old right-hander Don Sutton, making his third start since being acquired from the Houston Astros at the postseason roster deadline in late August. Five days earlier, Sutton had blanked the Detroit Tigers for his 255th career win – and first in the American League.

Sutton, in the 17th season of a career that resulted in his election to the National Baseball Hall of Fame in 1998, was opposed by Doyle Alexander. Alexander, himself a veteran of 12 seasons, was in his second stint with the Yankees. In the midst of a terrible season, Alexander, in his previous start on August 10, had yielded six runs on three homers in three innings, and then had gone on the disabled list with tendonitis.3 4

A large crowd was on hand for Cap Day at Yankee Stadium, with over 38,000 tickets sold.5 Alexander got through the first two innings without a problem, yielding just a single while striking out three. The Yankees threatened in the bottom of the first, with Jerry Mumphrey hitting a single and Ken Griffey Sr. drawing a walk, but Dave Winfield lined into a double play to end the inning. They went out one-two-three in the second.

In the top of the third, the Brewers showed why they earned the nickname Harvey’s Wallbangers. Right fielder Charlie Moore led off with a double and, after being sacrificed to third, scored on Paul Molitor’s single to center. Robin Yount, enjoying the first of his two MVP seasons, flied to Griffey for the second out, but Cecil Cooper, Ted Simmons, and Ben Oglivie each pounded home runs to make the score 5-0. It was the third time in the season that the Brewers had hit three consecutive home runs.6 Yankees manager Clyde King called in George Frazier from the bullpen and Frazier quickly quenched the fire by striking out center fielder Gorman Thomas.

The Yankees struck back in the bottom of the third. Barry Evans, playing second base because Willie Randolph was out with bursitis in his shoulder, drew a leadoff walk.7 After Ramos flied out, first baseman Lee Mazzilli hit a two-run homer to cut the deficit to 5-2. Two singles followed, but Sutton escaped without any more damage.

In the fourth, the Brewers kept pouring it on against Frazier. Moore’s double, a walk to Jim Gantner, another RBI single by Molitor, and a triple by Cooper increased their lead to 8-2. In this inning Frazier accidentally spiked Mazzilli while fielding Roy Howell’s grounder and making the play at first himself; John Mayberry took over at first after the inning.8

Both teams went quietly until the bottom of the sixth, when with two outs the Yankees’ designated hitter, Oscar Gamble, homered. Third baseman Graig Nettles drew a walk, and shortstop Roy Smalley doubled him home and then scored on Evans’s single, making the score 8-5. Ramos fanned to end the inning.

Frazier pitched his third straight scoreless inning in the seventh. The Yankees then knocked Sutton out of the game when Mumphrey became the fourth man he walked and Griffey followed with a single. Ace reliever Rollie Fingers would probably have been brought in at this point, but he was out with a torn muscle in his pitching arm that caused him to miss the rest of the season as well as all of the following season.9 Left-hander Jamie Easterly, also recently off the disabled list, entered and struck out pinch-hitter Lou Piniella to end the threat.10

In the top of the eighth, King brought in righty Curt Kaufman, making just his second major-league appearance. The Brewers’ lumber continued to slumber as Kaufman retired the bottom of the order in one-two-three fashion. Nettles made it an 8-6 game by leading off the eighth with the Yankees’ third home run of the game. After Smalley popped out, Evans drew a walk and the righty-swinging Ramos, now 0-for-10 for the Yankees, was due up. With no other healthy catchers available, King, the Yankees’ third manager of the season, had to let him hit.11

On a 3-and-1 count, Ramos swung at a high pitch and drove it into the right-field seats for a game-tying home run.12 Ramos afterward called it “one of the biggest thrills of my life.”13 As the crowd went wild, Easterly settled down sufficiently to strike out pinch-hitter Steve Balboni and Mumphrey to end the inning.

Like Fingers, the Yankees’ bullpen star Rich Gossage was out with an injury, so Kaufman was left in to face the top of the Brewers’ order.14 “It was like two different games for me,” he said later.15 Molitor started with his third single of the game. Yount tried to bunt him to second, but he popped one up and Balboni, now at first, made a diving grab for the first out.16 Cooper hit a short fly into left field, and Nettles raced back to make the catch, and quickly spun and threw to first to double off Molitor. King called it “one of the best plays” he’d ever seen.17

Griffey led off the ninth for the Yanks with a single, and Kuenn finally decided he’d seen enough of Easterly, signaling to the bullpen for righty Jim Slaton, who’d been a starting pitcher before this season. Cleanup hitter Winfield surprised by sacrificing Griffey to second, and Slaton gave pinch-hitter Bobby Murcer an intentional walk to set up a double play. A walk to Nettles, this one unintentional, loaded the bases.

This brought up the switch-hitting Smalley, who claimed later it was the most excited he’d been in his career.18 He didn’t let that bother him, though, as he drilled a single past Slaton into center field to knock in the winning run.19

King called the game “a team victory,” with everyone contributing.20 Kuenn, meanwhile, said he was glad the second-place Baltimore Orioles also lost, keeping the Brewers’ lead at three games.21 As it turned out, they lost that lead when the Orioles, who surged with 33 wins in 44 games down the stretch, beat them in three straight games in October before the Brewers defeated the Orioles in the final game of the season behind Sutton to win the division title by one game.

Ramos’s clutch home run proved to be the only hit he got with the Yankees, who sold him back to Montreal after the season. He finished his major-league career with 58 games in Montreal in 1983 and 1984, hitting two more home runs, then played in the minors through the 1988 season.

6 The other two times were on May 28 against the Angels and June 5 in Oakland. Cooper took part in all three streaks. JR Radcliffe, “Wednesday’s Back-to-Back-to-Back Homers Represented a First for Brewers,” Milwaukee Journal Sentinel, August 9, 2018, https://www.jsonline.com/story/sports/mlb/brewers/2018/08/09/brewers-three-straight-blasts-wednesday-were-historic-achievement/946574002/, accessed August 16, 2022.

14 “Yanks Happy to be Hateable Again.”

18 “Yanks Drink Up at Brewers’ Expense.”