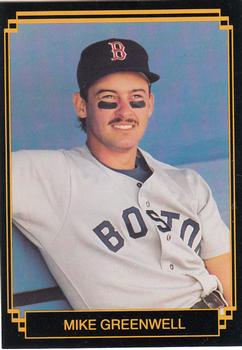 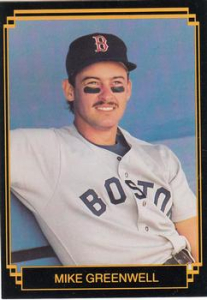 With 2½ weeks left in the 1988 season, the Boston Red Sox were in a good position to capture their second American League East crown in three years.

Surging out of fourth place by winning 12 in a row and 18 of 19 after Joe Morgan replaced John McNamara as manager at the All-Star break, the Red Sox had taken over first with another hot streak in early September. Seven wins in nine games gave Boston a 4½-game lead over both the New York Yankees and the Detroit Tigers on September 14, entering the final game of a three-game home series with the Baltimore Orioles. Baltimore was a distant seventh in the AL East Division after opening the season with a 21-game losing streak.

A crowd of 32,745 packed Fenway Park – where the Red Sox had set an AL record earlier in the season with 24 straight home wins – for the series-concluding Wednesday night game. They were rewarded by seeing Boston’s Mike Greenwell, in a breakout season at age 25, hit for the cycle.1

Former Baltimore ace Mike Boddicker, dominant in two postseason complete-game wins for the Orioles’ 1983 World Series champions, got the mound duties for Boston. In hopes of bolstering their rotation for the pennant race, the Red Sox had sent two promising rookies, Brady Anderson and Curt Schilling, to Baltimore for Boddicker on July 29.2 He had posted a 5-3 record and 3.24 ERA in his first 10 games with the Red Sox. This was Boddicker’s first start against his former ballclub.

Rookie right-hander Jose Bautista started for the Orioles. He had lost his last four decisions but had won his only other start at Fenway Park (June 24).

Greenwell was in his second full season with Boston in 1988. He had batted .328 in 1987 and finished fourth in the AL Rookie of the Year voting. Even though hitting and scoring were down league-wide in 1988, Greenwell was doing even better in almost all offensive categories. By mid-June he was Boston’s cleanup hitter, with the second-best average on the team behind eventual batting champion Wade Boggs.

The first inning saw both teams go three-up and three-down on a total of only 18 pitches. In the top of the second, Boddicker struggled a bit with his control. After retiring Eddie Murray, he walked Larry Sheets and Mickey Tettleton. Jim Traber’s single between shortstop and third base loaded the bases. Rick Schu singled to center, driving in Sheets and Tettleton for a 2-0 Orioles lead.

Greenwell’s big night kicked off in the bottom of the second. Leading off the inning, he launched his 21st home run of the season, over the wall in right-center field. Bautista hit Ellis Burks with a pitch, but Jim Rice grounded to second baseman Billy Ripken, who stepped on second and threw to first in time to turn the double play. Larry Parrish struck out, and the score stayed 2-1.

With one out in the fourth, Greenwell stroked a line drive down the right-field line. It one-hopped into the stands for a rulebook double. Burks singled to left, putting runners at the corners. With Rice batting, Burks stole second. Greenwell scored on Rice’s sacrifice fly to center, and Burks followed him across home plate when Parrish lined a single into left field. The Red Sox had taken the lead, 3-2.

Their lead lasted only until the Orioles’ next time at bat. With one out in the top of the fifth, Anderson doubled to left and moved to third base when second baseman Marty Barrett erred on a Cal Ripken grounder, the first miscue by a Red Sox player in 85 innings.3 Murray’s sacrifice fly brought Anderson home.

The night’s big controversy – and the eventual game-deciding run – came in the bottom of the sixth inning. With the score tied at 3-3 and Bautista still on the mound for Baltimore, Greenwell lifted a high fly ball toward the wall in left.

Sheets “maneuvered under the ball, but the wind at Fenway blew it toward the Green Monster,” and it fell in safely onto the warning track, just beyond Sheets’ outstretched glove.4 Center fielder Anderson picked up the ball against the wall and threw toward the infield. Greenwell never stopped running and ended up at third base, well ahead of Anderson’s throw. The official scorer awarded Greenwell a triple.

Even the Boston Globe writers were suspicious of a clean hit. Larry Whiteside wrote, “Greenwell hit a high drive toward the 379-foot sign that should have been caught.”5 After the game, Sheets told reporters, “I should have caught it. I sort of drifted and got my feet tangled up.”6 He added, “It’s not a triple. That ball’s an error. That ball was misplayed.”7

Nonetheless, Greenwell’s hustle paid off when the next batter, Burks, flied out to center, deep enough for Greenwell to tag up and score the go-ahead run.

After Rice struck out, Parrish lined a double down the right-field line. Todd Benzinger ran for Parrish and moved to third on a passed ball, but Jody Reed flied out to end the inning.

Veteran righty Dennis Lamp relieved Boddicker to pitch the eighth. The Orioles hit two singles but did not score.

Greenwell had his chance for history in the home half. Leading off an inning for the third time in the game, he blooped a 1-and-2 pitch into right field for a single, completing his cycle. The Red Sox faithful gave Greenwell a standing ovation. After the game, Greenwell said, “When I went up the last time, I was just hoping to bloop one in there. I got a broken-bat single, and it felt great.”8

Lee Smith, in his first season in Boston after a December 1987 trade brought him from the Chicago Cubs, came in to close the ninth. Traber flied out, Pete Stanicek struck out swinging, and Baltimore manager Frank Robinson, who had replaced Cal Ripken Sr. six games into the 1988 season, inserted Terry Kennedy as a pinch-hitter for Billy Ripken. Kennedy lined a single to right, putting the tying runner on base, but Joe Orsulak grounded out to end the game. Boston had won, 4-3.

In seven innings, Boddicker allowed six hits, three to designated hitter Traber, as he earned his sixth win as a Red Sox pitcher.9 Bautista, who allowed all four of Greenwell’s hits, took the loss, dropping his record to 6-14. He had not won since August 5.

With his 4-for-4 performance, Greenwell became the 17th player in Red Sox history to hit for the cycle.10 He scored three times and drove in one run. His batting average increased to .339, ranking third-best in the American League. His 37 doubles also placed him in a tie for third-best in the AL, and his 21 homers were a career high.11 In 13 games against the Orioles in 1988, Greenwell batted .400 (20-for-50), with five home runs and 17 runs batted in. He posted a slugging percentage of .820 against Baltimore’s pitchers.

The circumstances of his triple made Greenwell’s cycle a topic of controversy. Ken Rosenthal of the Baltimore Evening Sun, later a national baseball reporter, asserted that Greenwell “had the requisite four hits last night in the Boston Red Sox’s 4-3 victory over the Orioles, but his triple nearly hit leftfielder Larry Sheets in the head, and would have been declared an error in 49 other states.”12

Rosenthal continued his jabs at the call, writing, “Greenwell’s cycle proved a welcome distraction, and it’s doubtful many in the crowd found fault with official scorer Ben Ells, who, if nothing else, correctly identified Greenwell’s second-inning home run.”13 Even Baltimore’s skipper Robinson had a few choice words for the press, stating, “I’m not taking anything away from Greenwell. He’s a helluva hitter, and he’s having a helluva year. But you don’t have to give a guy something. That’s ridiculous.”14

Regardless of the official scorer’s ruling, Greenwell’s hustle to third was a key moment in the game, since it put him in position to score the eventual winning run on Burks’ sacrifice fly.

With the win, Boston completed a three-game sweep of the Orioles. Even though the Red Sox won only seven of their remaining 17 games, they ultimately outlasted the AL East competition in a tight race. Their 89 wins left them one game ahead of the Tigers, two ahead of the Toronto Blue Jays and Milwaukee Brewers, and 3½ ahead of the Yankees.15

Greenwell indicated that he had hit for the cycle one other time in his life, when he was a freshman in high school. He added, “I also needed a single the last time up that time.”16 Greenwell’s feat marked the third time in 1988 that a batter had hit for the cycle, following Milwaukee’s Robin Yount (June 12 against the Chicago White Sox) and San Francisco’s Chris Speier (July 9 against the St. Louis Cardinals).17

A video recap of Greenwell’s four at-bats can be seen on mlb.com:

1 Greenwell’s WAR for 1988 was 7.5, fourth-best in the American League (third-best for position players).

2 Anderson began the season on the Red Sox roster, but Schilling did not make his major-league debut until September 7 (after he had been traded to the Orioles), and it was against the Red Sox. He pitched seven innings but did not get a decision.

9 In his career, Boddicker started eight games against the Orioles and appeared as a reliever in four others. He won five of six decisions

11 Greenwell faded somewhat in his final 16 games, and his average dropped to .325, 41 points behind teammate Wade Boggs, who led all major leaguers. Greenwell garnered only 13 hits in his final 62 at-bats (.210), with two doubles, no triples, and just one homer. However, he ranked second in the 1988 AL MVP voting, behind Jose Canseco’s unanimous first-place finish.

15 The Red Sox were swept in the AL Championship Series, 4-0, by the Oakland Athletics.

17 That was the second time in his career that Speier had hit for the cycle. The first took place 10 years earlier when he was with the Montreal Expos, on July 20, 1978, against the Atlanta Braves.