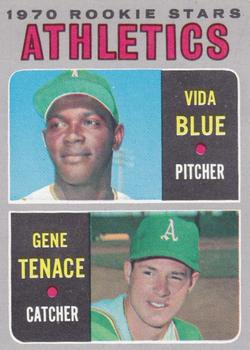 The Minnesota Twins (92-60) were ready to party. All that stood between them and clinching the American League West title was one win over the second-place Oakland A’s, who were 8½ games back at 84-69. Given the standings and the Monday night game, perhaps it wasn’t surprising that only 4,284 fans were in attendance. Starting this three-game series in Oakland, the Twins were prepared with champagne in the locker room.

The champagne came in handy – but not for the expected reason.

The pitcher standing in the way of their celebration, Vida Blue, was still in his rookie season and suffering from a bad cold.1 He had a brief call-up in 1969, giving up 13 home runs in 42 innings. After starting the 1970 season with the Iowa Oaks of the Triple-A American Association, being coached by fellow player Juan Pizarro,2 he showed significant improvement.3 In his three starts for Oakland after his September call-up in 1970, the 21-year-old left-hander had a 3.38 ERA and a complete-game one-hit shutout on his ledger.

Blue got off to a good start in the first inning. He struck out César Tovar and Harmon Killebrew, with a fly out of Leo Cardenas sandwiched between the strikeouts.

Minnesota’s Jim Perry (23-11, 3.09 ERA) was having one of the best years4 of his lengthy career, but this outing did not start as well as Blue’s. Bert Campaneris led off with a triple, and Joe Rudi walked. Felipe Alou grounded into a double play, but Campaneris scored what turned out to be the only run the A’s would need. Although Don Mincher singled, Perry got out of the inning when Sal Bando flied out.

Blue allowed his only baserunner in the top of the fourth. With two outs, Killebrew worked the count to 3-and-1. Blue threw a curveball for ball four, not wanting to give the powerful right-hander an opportunity to tie the game with one swing of his bat.5 Killebrew was left at first when Tony Oliva grounded to second.

Alou doubled to open the bottom of the fourth. With two outs, Perry intentionally walked Reggie Jackson. The 24-year-old Jackson had struggled in 1970 after his 47-homer emergence a year earlier, but he was a left-handed hitter. Perry preferred to face Gene Tenace, the right-handed-batting catcher, who was hitting .291. The strategy worked: Tenace grounded to shortstop for the force out to end the inning.

Blue’s first two outs in the fifth were uneventful, but he needed some extra effort from his shortstop for the third out. Campaneris caught George Mitterwald’s liner with a leaping backhanded grab above his head.6 Blue said afterward that he started thinking “no-hitter” in this inning.7

Perry allowed a one-out walk to Blue in the bottom of the fifth, but he was forced out when Campaneris grounded to short. Campaneris tried to score from first on Rudi’s single to right, but the relay beat him to the plate for the third out, holding the score at 1-0, A’s.

In the top of the sixth, Blue was helped by a great play by his catcher. Tenace reached into the Twins dugout to catch Tovar’s two-out foul pop, ending the frame.8

The A’s threatened in the bottom of the sixth. First, Perry plunked Mincher with one out. Mincher gestured at Perry, but umpire Larry Barnett calmed Mincher down and sent him to first. Perry hit Bando with the next pitch, prompting a warning from Barnett.9 Perry struck out Jackson for the second out, but walked Tenace to load the bases. The Twins escaped unscathed when Dick Green lined out to right.

After a groundout and another strikeout of Killebrew in the top of the seventh, Blue benefited from another fine defensive play, this time by third baseman Bando. He caught Oliva’s foul with two fingers and managed to hang onto the ball for the out.10

Blue struck out to start the bottom of the seventh. All Perry allowed in the seventh was a single by Steve Hovley, who had replaced Rudi in the lineup in the top of the frame. In conjunction with that move, Jackson moved from center field to right, Alou moved from right to left, and Hovley took over in center.

The dugout had remained silent around Blue, who stared out at the A’s expensive scoreboard while thinking “no-hitter, no-hitter.”11 In the eighth inning, for the fourth time, he benefited from an extra-effort play by a teammate. Again, it was Bando coming through – knocking down Mitterwald’s grounder with the webbing of his glove and throwing across to first in time for the out.12

The score was still 1-0, A’s as the game entered the bottom of the eighth. At this point the wheels came off for Perry, who had allowed only four hits so far (along with four walks and two HBP). Mincher started the inning with a single, and scored on Bando’s single to center when second baseman Danny Thompson missed a catch in an ensuing rundown.13 Bando advanced to third. After Jackson struck out, Perry intentionally walked Tenace. Green singled, scoring Bando. That brought Blue to the plate. He executed a sacrifice bunt, advancing Tenace and Green to third and second. They could have stayed put: Campaneris’s home run brought them all in, bringing the score to 6-0, A’s.

Blue now needed just three more outs for the no-hitter. He said he was less tense because he’d been able to bat in the A’s big eighth inning. He struck out Thompson on a 1-and-2 fastball and pinch-hitter Bob Allison on a 2-and-2 fastball for the first two outs.

Tovar was the last Twins batter. He was out on a foul pop on a two-strike count – one more fine defensive play, this time from first baseman Mincher.14 Blue had his no-hitter15 on 114 pitches, mostly fastballs.16

The celebration was on – teammates and some fans stormed the field to celebrate. Owner Charlie O. Finley called to award Blue a $2,000 bonus (and $1,000 to his catcher, Tenace). When Blue did get back to the clubhouse, there was a bottle of champagne waiting for him – thoughtfully sent over by one of the Twins.17 After the game, he wanted to call his mother back home in Louisiana, but was afraid she’d already be asleep.18

Blue started two more games in 1970, finishing with a 2.09 ERA in 38⅔ innings pitched. His breakout season was the next year – he was the AL’s starting pitcher in the All-Star Game, won the Cy Young Award, and was voted Most Valuable Player. Blue, Bando, and a resurgent Jackson led the A’s to the division title in 1971 and they won three straight World Series from 1972 to 1974. Those few faithful fans who showed up on the Monday night in Oakland got a look at their future star.

As for the Twins, they won the next night’s game 5-3, and popped the rest of their champagne. That was their only celebration, though: They were swept in the Championship Series by the Baltimore Orioles.

My family were A’s fans when I was growing up in the Bay Area. I wouldn’t have been at this game (school night), but I certainly watched Blue the following summer. He was the first baseball player I knew by name. The Blue-Tenace 1970 rookie card is in my collection. What prescience for Topps to put Blue on the card with his catcher for his no-hitter!

3 As discussed in his SABR bio, Blue credited Pizarro with helping him “more than anyone else in my career.”