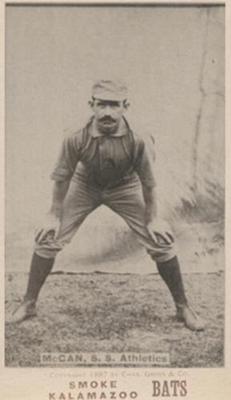 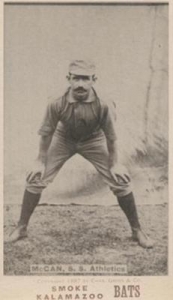 At close of play on September 20, 1886, the St. Louis Browns (82-41) had a 12-game lead over the second-place Pittsburgh Alleghenys in the American Association, with the Philadelphia Athletics (54-63-3) in sixth place, 25 games off the pace.

The next day, the Browns came to Philadelphia for a three-game series. St. Louis, as expected, won the first two games, extending Philly’s losing streak to four games. They played the final game of the series on September 23, at Philadelphia’s Jefferson Street Grounds. According to the Philadelphia Times, “an announcement that Bobby Mathews would once more pitch for the home team had its effect upon the crowd,”1 and an estimated 2,500 spectators showed up.

Mathews had started playing professional baseball in 1871with the Fort Wayne Kekiongas and had been with the Athletics since 1883, when he won 30 games, as Philadelphia “took the pennant behind Mathews’ right arm.”2 Remarkably, he matched that win total in both 1884 and 1885, despite his team winning only 61 and 55 games, respectively.3 In 1886, now 34 years old, he had been replaced by Al Atkinson as the ace of the Athletics staff, as Mathews’ earned run average (3.96) was 1.53 higher than in the previous season (2.43). Yet the veteran was still a fan favorite.

Opposing Mathews on the mound was 17-year-old Nat Hudson, a right-handed rookie from Chicago. Hudson was part of a three-man St. Louis rotation that included Dave Foutz and Bob Caruthers, both of whom were only in their third seasons in the majors.4 Hudson was handy with the bat, so manager Charlie Comiskey put him into the seventh spot in the batting order.

Neither pitcher was in top form in this contest, and Philadelphia whipped the Browns by a score of 15-6, highlighted by shortstop James “Chippy” McGarr hitting for the cycle.

McGarr was a 23-year-old infielder for the Athletics. In 1884 he began his big-league career playing for the Chicago Browns-Pittsburgh Stogies, part of the 12-team Union Association, which folded after its only season.5 McGarr appeared in 19 games for C-P, batting .157 while playing either second base or in the outfield. After spending 1885 and part of 1886 with Haverhill in the Eastern New England League, he signed with Philadelphia, playing shortstop in 71 games and batting .266 for the 1886 Athletics.

The Browns scored twice in the opening inning. Mathews struck out Arlie Latham (“The Freshest Man on Earth”6), and “it was some minutes before the game could be resumed,”7 as the rowdy crowd cheered Mathews and jeered Latham. With two down, Bill Gleason hit a grounder to third baseman Denny Lyons and reached “on an erroneous decision”8 from the umpire Tom York. Both the Philadelphia Times and the Philadelphia Inquirer reported that the throw from Lyons to first was in time, but York called Gleason safe. The next batter, Curt Welch, tripled to right field to bring Gleason home, and Welch scored when Lyons couldn’t handle a grounder off the bat of Foutz, who was playing right field for the Browns (which he often did when not pitching).

The incensed crowd “grew wild and several of the more excitable jumped over the fences and threatened bodily violence to Mr. York.”9 Former Athletics manager Lew Simmons,10 assisted by team captain Harry Stovey and some other players, corralled those fans and finally succeeded in restoring order. Throughout the game, however, “Umpire York’s calling of balls and strikes was very erratic.”11

Philadelphia tied the game in the second and took the lead in the third, and “the crowd forgot its grievance”12 against the umpire. In the second inning, McGarr grounded to Gleason and reached second on the shortstop’s wild throw to first. He then stole third. Hudson walked Lou Bierbauer, and when Bierbauer stole second base, McGarr was tagged out trying to steal home. But Ed Greer’s triple plated Bierbauer, and Cyclone Miller’s fly ball to center fielder Welch brought Greer home with the tying run.13

In the next inning, Philadelphia loaded the bases on singles by Henry Larkin and Jocko Milligan and a walk to Lyons. McGarr drove them all home with a triple, and he scored on a wild throw by second baseman Yank Robinson. The Athletics now led, 6-2.

They put the game out of reach by scoring nine runs in their half of the seventh. McGarr led the outburst with a single and a home run in the inning. His homer came with Milligan on base. According to the Kansas City Times, the hit should have counted for only two bases, but “Welch deliberately walked after the ball, enabling the batter to go all the way around.”14 The center fielder was “evidently put out at the way the Athletics were hitting Hudson or at the decisions of the umpire.”15 This brought on a round of hissing by the crowd. In addition to McGarr’s two blows, Hudson gave up hits to Bierbauer, Larkin, Lyons, and Milligan and walked two others. The Browns defense also committed four errors, making two of the runs unearned.

The St. Louis batters put three runners across the plate in their half of the inning. Foutz and Robinson collected hits, but McGarr, Milligan, and Lyons all made errors, making the score 15-5.

The Browns manufactured one final run in the eighth frame. Welch singled, stole second and scored on yet another error by Lyons. The Philadelphia Inquirer informed its readers that the “bulk of the Athletics’ error was made by Lyons, who seemed unable to stop anything.”16 The St. Louis Globe-Democrat blamed Lyons for “four fumbles and a wild throw,”17 although the Philadelphia Times cited Lyons for only two miscues.18

The game was called on account of darkness after eight innings, giving the Athletics a 15-6 victory and ending their losing streak. Philadelphia had knocked 14 hits off Hudson, but “McGarr’s batting was the heaviest.”19 On the mound, Mathews’ off-speed “slows”20 bothered the St. Louis hitters, and he did a good job of scattering their seven hits.

Sometime between his triple in the third inning and the single and homer in the seventh, McGarr hit a double, but since it did not lead to a run, it was not explicitly reported in the newspaper accounts (he is credited with a two-base hit in every box score, and he could not have gone four innings without an at-bat). He had hit for the cycle; in addition, McGarr scored twice and drove in five runs. The shortstop became the third player in Philadelphia franchise history to hit for the cycle, following Lon Knight (a natural cycle on July 3, 1883, against the Pittsburgh Alleghenys) and Larkin (a reverse natural cycle on June 16, 1885, also versus the Alleghenys).21

For the season, McGarr had just 14 extra-base hits (9 doubles, 3 triples, and 2 home runs), with three coming in this game. He played the next season for Philadelphia but was traded (with Fred Mann, Milligan, and $3,000) to the Browns (for Gleason and Welch) on November 21, 1887. He spent just one season with St. Louis before moving on.

McGarr’s accomplishment was also just the 13th time in major-league history that a player had collected a single, double, triple, and home run in a game. It was the fourth (and last) time that the rare feat occurred in 1886, with two cycles in the National League and one other in the American Association.22

The Browns recovered from their rough day in Philadelphia to win their second of what turned out to be four consecutive American Association pennants. They went on to beat the National League’s Chicago White Stockings in the “World Championship series,” four games to two.

3 Winning 90 games in three seasons is indeed impressive, unless we realize that Charles “Old Hoss” Radbourn of the Providence Grays won 108 in just two seasons (48 wins in 1883 and 60 in 1884, which still stands as the most wins in a single season). Radbourn also won 28 games in 1885, giving him a three-season total of 136, which is 46 more than Mathews over the same period.

4 Hudson won 16 games in his rookie season, but Foutz won 41 and Caruthers won 30 as the Browns ran away with the pennant. For the season, Hudson posted a 3.03 ERA, highest among the three starters, but he also received an average of just over seven runs per game of support from his teammates (also highest among the starting pitchers).

5 Philadelphia pitcher Atkinson was also on the 1884 C-P squad.

10 Simmons managed the Athletics from Opening Day (April 17) to August 25, to a 41-55 record. On August 26 Bill Sharsig took over managerial duties and stayed at the helm until season’s end. This was Simmons’s only managerial stint of his career, but Sharsig came back to manage the A’s from 1888 through part of the 1891 seasons.

13 Cyclone Miller was a pitcher for the Athletics and appeared in 19 games on the mound in 1888. He also played one game – this one – as a right fielder.

18 In 1888 Lyons played 32 games at third and committed 21 errors. Jack Gleason (older brother of the Browns’ Bill) was the Athletics’ regular third baseman, but he did not play in this game. Just as well, as Gleason committed 60 errors in 77 games at third for Philadelphia. As a team, the Athletics committed 637 errors, which was worst in the league.

21 On June 14, 1876, George Hall, an outfielder for the Philadelphia Athletic Club, collected five hits and possibly 14 total bases, but accounts differ on the type of hits, so Hall is not given credit for the first cycle (thus, McGarr’s feat is listed as the third Athletics’ cycle). See Mike Huber, “June 14, 1876: George Hall gets five hits, but is it a cycle?” SABR Games Project, posted online at sabr.org/gamesproj/game/june-14-1876-george-hall-gets-five-hits-but-is-it-a-cycle/.