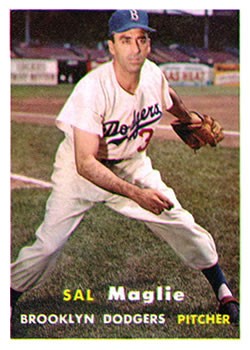 “Sal Maglie sat in the Dodger clubhouse and performed the ritual of anointing his pitching hand. First he applied a base of liquid rosin. Then he sprinkled the fingers with powdered rosin. And when he was done he was ready to pitch.”1

September is the time when pennant races are decided. Just months earlier, could you have ever imagined seeing former New York Giant Sal Maglie standing on the mound at Ebbets Field wearing the home white uniform with the script Dodgers on the front? Unfathomable. In late May, the Cleveland Indians sold Maglie to the Dodgers for a song.2 The New York Times pointed out that Maglie, also known as “Sal the Barber,” had been “the center of many a Dodger-Giant hassle because of his use of brush-back pitches to discourage the plate-crowding right-handed sluggers of the Brooks.”3

During his 1950 to 1954 heyday pitching for the Giants, Maglie had a 22-6 record against the Dodgers and won 11 of 12 decisions on that very mound. Why? “I always liked this mound in Ebbets Field,” Maglie said. “It is one of the best to pitch from. It doesn’t slope forward as sharply as some.”4

The New York Times speculated that “the chances are he’ll get more work, in relief or as a possible spot starter, with the Dodgers.”5 Time would prove otherwise. Maglie had pitched only five innings for the Indians, so manager Walter Alston gave him the ball for one start and two relief appearances in some early work as a Dodger. Maglie shut out the Braves and Lew Burdette in Milwaukee on June 4, 3-0, on a three-hitter, and soon enough, Maglie was a regular in the Dodgers’ pitching rotation.

Fast-forward as the calendar turns to September. The Dodgers were in second place, trailing the Milwaukee Braves by 2½ games. When the Braves came to town on September 11 for a crucial two-game series with the Dodgers, Alston gave the ball to Maglie to start on his favorite mound. In front of a crowd of 33,384 at Ebbets Field, Maglie didn’t disappoint. He scattered eight hits, yielding solo home runs to Eddie Mathews and Joe Adcock and driving in two runs with a fourth-inning single, for a 4-2 win and a share of first place.6 It was Maglie’s third straight win in this September stretch run.

Now it’s the last week of the baseball season, a chilly Tuesday evening to be more precise, and the race for the National League pennant is still very much in doubt.  That afternoon, the Braves had beaten the Cincinnati Redlegs behind Warren Spahn’s 20th win of the season, putting them one full game ahead of the second-place Dodgers. A Dodgers win was needed just to stay even in the loss column.

It’s Maglie’s turn on the mound at Ebbets Field and again he is facing Jack Meyer (7-10, 4.23 ERA) who had been used by Phillies manager Mayo Smith mainly as a reliever. Tonight would be different than when they last met. In Meyer’s first start of the season, on this very mound on August 10, he beat the Dodgers and Maglie, 3-2. Meyer hadn’t won since, while Maglie pitched to a 6-1 record.

Maglie was nearly perfect the first time through the Phillies’ batting order. With two outs in third, he walked Meyer on a full count. Walking the opposing pitcher is regarded as the cardinal sin of baseball, but for Maglie on this night it was a forgivable lapse on his path to a career highlight.

For all practical purposes, the game was decided in those first three innings. Jackie Robinson opened the second with a double to the left-field corner. Gil Hodges walked with one out. When Meyer tried to pick off Robinson at second base, he threw the ball into center field and each runner advanced one base. Carl Furillo’s groundout to shortstop Roy Smalley scored Robinson with the first run and Roy Campanella added two more with his 19th home run of the season. 3-0 Dodgers.

Jim Gilliam opened the third inning with a single to right and was sacrificed to second by Pee Wee Reese. Meyer intentionally walked Duke Snider, but when he also walked Robinson on a full count to load the bases, he also walked himself out of the game, replaced by Bob Miller. When Sandy Amorós tapped a roller toward third, Miller fielded it cleanly and threw to Stan Lopata at the plate. Lopata couldn’t handle the throw, and a sure force out became two unearned runs as both Gilliam and Snider scored.

The Dodgers scored those five runs on only three hits thanks to some sloppy play in the field by the Phillies. A single to center field by Hodges in the sixth inning off rookie reliever Jack Sanford was the Dodgers’ only other base hit for the remainder of the game.

Now Dodgers fans could concentrate on Maglie’s pitching and staying warm. Maglie made good use of an electric blanket to stay warm and keep his right shoulder loose in the dugout while the Dodgers were at bat. If he was worried about his grip on the baseball in the cold weather, Maglie had his infielders, Reese, Robinson, and Hodges, rubbing up the baseballs throughout the game.7

As the game moved to the eighth inning, Maglie had retired the side in order in the last four innings. The drama was building. Maglie opened the inning by walking Willie Jones. Maglie shook off Campanella’s call for a curveball and got Elmer Valo to pop up to Reese on an outside-corner fastball.

Now the Dodgers’ defense rose to the occasion. Solly Hemus hit a hot grounder right over first base which Hodges fielded and fired to Reese at second. The return throw to Hodges sealed the inning-ending double play. Hemus was convinced that the ball was foul; the ensuing argument got him tossed out of the game by umpire Augie Donatelli.8

In the ninth inning, Frankie Baumholtz batted for Roy Smalley. With two strikes, Baumholtz lifted a foul toward the Dodgers dugout. Campanella raced over, stepping into the dugout and catching the ball as he was prevented from falling by Dale Mitchell. One out. Harvey Haddix, pinch-hitting for Sanford, struck out swinging.9 Two outs.

The no-hitter is unlike any other statistical gem in baseball’s record book. Its possibility exists in every game played, its completion must wait for the last batter in the last inning. With two outs, fans anticipated that Richie Ashburn was that batter, especially with a 1-and-2 count, but Maglie hit him. That left matters to Marv Blaylock, who grounded out, Gilliam to Hodges, to ensure a new entry into the record book. The 39-year-old Maglie became the oldest National League pitcher to hurl a no-hitter.10 Nonetheless, Maglie later reflected that his three-hit shutout of the Braves in early June, his first win as a Dodger, was a better-pitched game than the no-hitter.11

The National League pennant race came down to the last weekend of the season. The Dodgers swept a three-game series from the Pirates at Ebbets Field, including complete-game wins by Maglie and Clem Labine, while the Braves were losing two out of three to the Cardinals in St. Louis. When Don Bessent saved Don Newcombe’s 27th win of the season in the finale, the Dodgers edged the Braves by one game for the pennant. Their down-the-stretch pitching in September played a key role in that triumph, led by Sal Maglie (6-1, 1.77 ERA).12

Indeed, Maglie was not only a bargain, but a pitcher who won over the hearts of Dodgers fans. In the radio recap of the no-hitter, Vin Scully made it perfectly clear that Maglie had “repaid all the grief and all the sorrow he has brought to the Brooklyn borough.”13 Players and fans alike wanted another shot at the Yankees in the World Series and they got it, thanks in large measure to Salvatore Anthony Maglie and the mound at Ebbets Field.14

In its short bio of Maglie after the no-hitter, the New York Times noted that his typically reserved and quiet style had been abandoned in 1956 to provide pitching tips to young Dodgers hurlers.15 Don Drysdale was the recipient of such advice. “But the thing that Sal always told me about the knockdown pitch was, ‘It’s not the first one, it’s the second one.’ The second one makes the hitter know you meant the first one. And if you’ve got control, you can waste a pitch to put a little fear in the hitter.”16 The rookie season of Don Drysdale is captured in two SABR Games Project essays.17

The author accessed Baseball-Reference.com for box scores, play-by-play information (baseball-reference.com/boxes/BRO/BRO195609250.shtml), and other data, as well as Retrosheet.org (retrosheet.org/boxesetc/1956/B09250BRO1956.htm). The Sal Maglie baseball card (#5) is from the 1957 Topps series and was obtained from the Trading Card Database.

5 “Maglie, Ex-Nemesis of Dodgers, Bought by Brooks from Indians.”

6 Roscoe McGowen, “Maglie Sets Pace in 4-to-2 Victory,” New York Times, September 12, 1956: 44. Just as Sal Maglie was a nemesis of the Dodgers in his days with the Giants, so too was the Braves’ Bob Buhl. The Dodgers finally beat Buhl for the first time in this game after seven consecutive losses. Buhl beat the Dodgers 30 times in his major-league career (1953-1967).

9 Harvey Haddix is best known as a pitcher and for one game in particular—May 26, 1959: Harvey Haddix pitches 12 perfect innings, loses in 13th. A career .212 hitter, Haddix had four hits in 15 pinch-hitting appearances for the 1956 Phillies.

12 Newcombe added  a 5-1, 3.17 ERA record to the Dodgers’ starting pitching in September. In the bullpen, Bessent contributed three wins and five saves and Labine saved three games in addition to his complete game last-weekend win against the Pirates. Newcombe (27-7, 3.06 ERA) won the NL Most Valuable Player Award as well as the initial Cy Young Award in 1956.

13 This Day in Baseball, “Sal Maglie No-Hits the Phillies on September 25, 1956: Vin Scully Gives the Recap,” youtube.com/watch?v=EbjDMFyVtew. Jerry Doggett is the other play-by-play announcer.