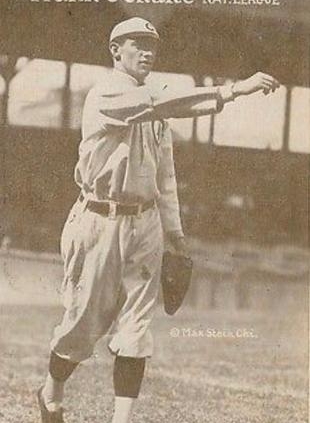 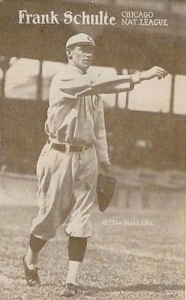 The Cincinnati Reds, trailing the Chicago Cubs 9-0 after eight innings in the first game of a September 26, 1912, doubleheader at Chicago’s West Side Park, scored 10 runs in the top of ninth. It would have been the greatest ninth-inning come-from-behind victory in major-league history – except that the Cubs scored two runs of their own in the bottom of the ninth, without the benefit of a hit, to win 11-10.

There was little at stake for either team in these late-season games. The Cubs began the day in second place, 10 games behind the New York Giants, who clinched the National League pennant that day by sweeping a doubleheader. The Reds were in fourth place, far behind the Cubs and the third-place Pittsburgh Pirates.

In fact, the biggest story on the sports pages of the Chicago papers on September 26 was not about the games scheduled for that day but about comments the day before by Cubs owner Charles Murphy. In a bylined article in the Chicago Tribune, Murphy proposed what the headline called a “booze rule,” prohibiting players from imbibing alcoholic drinks. Murphy asserted that the Pirates had such a rule and said Pittsburgh owner Barney Dreyfuss told him “too much booze” had cost Chicago the 1909 pennant (won by the Pirates).1

That didn’t sit well with the Chicago players, who pointed out that the Pirates had captured one pennant in seven years while the Cubs had won four. They also alleged that the Pittsburgh players were not the teetotalers that Murphy and Dreyfuss said they were.2 Cubs manager Frank Chance, hospitalized with blood clots, penned his own reply to Murphy a day later in the Tribune. “If Mr. Murphy or Mr. Dreyfuss or anyone else says my team lost the pennant in 1909 on account of drinking he is a liar,” Chance wrote.3 (The dispute reportedly played a part in Chance’s not being invited back as manager for 1913.4)

The Reds had a difficult path just to get to Chicago. They had embarked on a three-week road trip, with games against every NL foe but the Pirates, starting on September 10. After stops in Brooklyn, Philadelphia, and New York, they lost twice to the last-place Boston Braves in Boston on September 21 and 23, dropping their record to 72-72.

The league schedule gave the Reds two days off, but they were not idle. First came a train trip to Rochester, New York, for an exhibition game against Rochester’s American Association team on September 24. It was raining when they arrived in Rochester, washing out the game. The Reds boarded another train, but not to Chicago – they had scheduled another exhibition for the next day in Toronto. They arrived in Toronto that evening, after an hour’s stop to see Niagara Falls.5

The Reds lost that game against Toronto’s International League team,6 and then hopped on a 7 P.M. train for Chicago, which arrived five hours later than scheduled.7

Things did not improve once the game started. On a cold early autumn afternoon, the Cubs capitalized on poor Cincinnati defense to build a 9-0 lead after eight innings. Shortstop Eddie Grant’s error led to a Chicago run in the first. A second-inning run scored after starting pitcher Art Fromme made a throwing error. Chicago tacked on two runs in the third when rookie center fielder Pete Knisely misplayed Vic Saier’s fly ball into a triple; they added two more in the fifth, thanks to two errors by catcher Hank Severeid and a double by Frank Schulte.

Two more miscues by Fromme and Severid – the Reds made seven errors in the game – contributed to the Cubs’ three-run seventh. Meanwhile, the Cubs starter, righty Jimmy Lavender, was breezing through eight shutout innings, scattering seven hits while striking out 10.

Three outs from victory, Lavender returned to the mound in the ninth. Grant led off by reaching first on an error by third baseman Heinie Zimmerman. Dick Egan doubled, sending Grant to third. Severeid hit a grounder to shortstop and was safe when Joe Tinker, managing the club in Chance’s absence, made a poor throw to first. Grant scored on the error, breaking the shutout. Egan took third.

Johnny Bates batted for Fromme and forced Severeid at second. Egan held at third but scored on an infield single by the next batter, Bob Bescher. Knisley forced Tex McDonald, who had run for Bates, at third. The Cubs were now only one out away, but consecutive singles by Dick Hoblitzell, Mike Mitchell, and Rafael Almeida brought in three more runs, cutting the deficit to 9-5.

Lavender still had a four-run cushion, but he walked Grant, and the Reds had the tying run at the plate. Tinker replaced Lavender with 23-year-old right-hander Fred Toney, who had split the 1911 and 1912 seasons between the majors and minors.

The third out remained elusive. Toney walked Egan and Severeid, forcing in two more runs, and was relieved by Larry Cheney, who then walked Bescher, Knisely, and Hoblitzell. That made six straight walks, five with the bases loaded, giving Cincinnati a one-run lead before Mitchell ended the 10-run inning by hitting a popup to Tinker.

The Reds now needed three outs for an improbable win. Ralph Works, picked up by Cincinnati just 10 days earlier,8 came in to pitch the bottom of the ninth.9

Unfortunately for the Reds, the wildness exhibited by the Cubs pitchers in the top of the ninth seemed to be contagious. Works walked Zimmerman and hit Schulte with a pitch and was replaced by Rube Benton. Benton struck out Saier for the first out, walked Tinker to load the bases, and struck out Jimmy Archer, leaving him in need of one more out to preserve the comeback win.

It never came. Benton walked pinch-hitter Red Downs, batting for Cheney, and Zimmerman trotted home with the tying run. Jimmy Sheckard was next, and he, too, drew a base on balls, bringing Schulte home with the winning run.

Of the last 11 batters to reach base in the game, 10 reached on walks and one on a hit by pitch, resulting in seven runs without a hit between the two teams.

The wild finish was part of perhaps the strangest doubleheader ever played. In the second game, with the Cubs ahead 10-0 after three innings, both teams tried to manipulate Father Time, with the Reds doing everything they could to slow things down so that 4½ innings couldn’t be completed before darkness fell, and the Cubs speeding things up by deliberately making outs, eventually keeping the action going long enough to secure the sweep in a game shortened to six innings.

“One of the weirdest afternoons of baseball on record,” the Cincinnati Enquirer concluded, after the day was done.10 The Chicago Tribune was even more colorful in its assessment: “Such terrible things happened in both contests that a lot of spectators may have been inclined to think the players on each side were intoxicated, but every man of them was sober.”11

Play-by-play for the ninth inning was reconstructed from newspaper accounts in Chicago and Cincinnati newspapers.

Jack Ryder, “Horrible Were the Exhibitions Put Up by Both the Reds and Chicago Cubs,” Cincinnati Enquirer, September 27, 1912: 8.

2 Sam Weller, “Cubs Play Reds Twice Today,” Chicago Tribune, September 26, 1912: 15. Cubs players asserted that when the two teams traveled together from Chicago to Pittsburgh earlier in the season, there were more Pirates players than Cubs players imbibing in the buffet car.

5 Jack Ryder, “Rain Greeted the Red Team on Its Arrival at Rochester, and Game Was Called Off,” Cincinnati Enquirer, September 25, 1912: 6.

6 Jack Ryder, “Bingles Came Like Cannon Balls from Bats of Champions in International League, and Locals Lost to Joe Kelley’s Team by Score of 9 to 3,” Cincinnati Enquirer, September 26, 1912: 6.

9 Pitching the year before for the Tigers against the White Sox, Works gave up eight runs in four innings of relief leading to 13-1 deficit in a game Detroit eventually won 16-15. That is the largest deficit ever overcome in the major leagues, later matched in two other games. Thomas E. Merrick, “June 18, 1911: Tigers trail by 12, then triumph 16-15 over White Sox,” SABR Games Project, https://sabr.org/gamesproj/game/june-18-1911-tigers-trail-by-12-then-triumph-16-15-over-white-sox/.

10 Jack Ryder, “Horrible Were the Exhibitions Put Up by Both the Reds and Chicago Cubs,” Cincinnati Enquirer, September 27, 1912: 8.