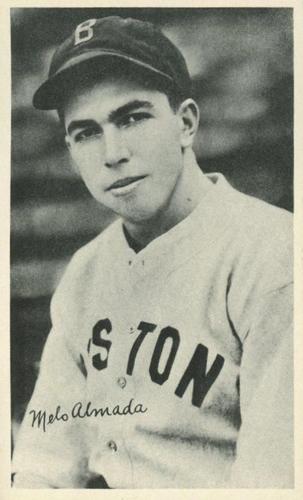 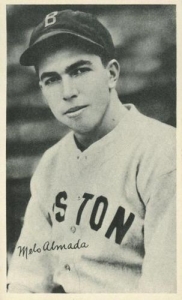 The team that was the last to integrate had been – 26 years earlier – the first to field a native of Mexico in the major leagues. The team was the Boston Red Sox, who took until 1959 to field a Black ballplayer – Pumpsie Green. In 1933, however, when Baldomero Melo “Mel” Almada took his position in Fenway Park’s center field, he became the first Mexican native to play in a major-league game.1 Only three other Mexican natives played major-league baseball before the 1950s: Chile Gomez (1935), Jesse Flores (1942), and Bobby Avila (1949).

Almada was born in Huatabampo, Sonora, Mexico on February 7, 1913. When he was one year old, his parents moved to Southern California, where his father served in Los Angeles as consul for the government of Mexico.

The Red Sox had had players of Mexican-American ancestry prior to Almada. At the time of Almada’s debut, the Los Angeles Times noted that Almada was the third Mexican ballplayer to play in the major leagues, with the prior two born in the United States.2 One fact the newspaper did not note: All three played for the Red Sox. They had previously fielded right-handed pitchers Frank Arellanes (born in Santa Cruz, California) from 1908 through 1910 and Charley Hall (from Ventura, California) from 1909 through 1913.

The Red Sox were hopelessly locked into the second division in September 1933, in seventh place and 31½ games behind the league-leading Washington Senators. They were 10 games behind the sixth-place Detroit Tigers. They had lost five games in a row, including an 11-5 loss to the Tigers on September 6.

The next day’s game was rained out and rescheduled as part of a Friday afternoon doubleheader. Almada, who had been playing for the Seattle Indians in the Pacific Coast League, arrived in Boston after a four-day trip across the country, in time for the twin bill.

In the Tigers’ first, after fly-ball outs to left and right field, Almada fielded a single to center. The fourth batter struck out.

Leading off the bottom of the inning, Almada – who both batted and threw left-handed – worked the count to 3-and-2 and then drew a base on balls. He went to second on a walk to third baseman Billy Werber. Right fielder Dusty Cooke laid down a sacrifice bunt, advancing both runners – and reached safely on an error by Bridges. Left fielder Roy Johnson grounded out, shortstop to second base, and Almada scored the first run of the game. Werber scored after him when catcher Rick Ferrell hit a fly ball to center field. It was 2-0, Red Sox.

Andrews set the side down in order in the second, the third out on a fly ball to Almada on a “running in, close-to-the-ground grab.”5

With one out and a runner on first, Almada struck out in the Boston second.

Bridges singled with one out in the top of the third, but shortstop Billy Rogell hit into a force play at second base, and then got himself picked off first.

With the score still 2-0, Almada came up for a third time with two outs in the bottom of the fourth and singled to right field. He was caught attempting to steal second, with Werber at the plate.

Hank Greenberg, an emerging slugger at age 22, led off the fifth for the Tigers with a single to center. After another single and a walk, the bases were loaded with nobody out. Catcher Ray Hayworth doubled to right, scoring two. A third run scored on Bridges’ fly out to Almada in center, and a fourth scored on a fly by Rogell to left field.

There was no more scoring through the eighth inning, and it was 4-2, Tigers, heading into the ninth. Almada had grounded out to shortstop leading off the seventh.

Andrews retired the three Tigers he faced in the top of the ninth. In the bottom of the inning, after pinch-hitter Johnny Gooch grounded out, second to first, Smead Jolley pinch-hit for Andrews and he hit a solo home run about six rows up in the center-field seats. The Red Sox were down by just one run, but Almada grounded to second and Werber fouled out to first baseman Greenberg. Final: 4-3, Detroit. Both starting pitchers threw complete games.

Almada had gone 1-for-4 with a walk in his debut game. He also went 1-for-4 in the second game of the doubleheader, another 4-3 Tigers win, with an eighth-inning single.

After the double defeat during another discouraging season, the Boston Globe declared, “About the only consolation the crowd got out of the game was the good work by Almada, a new outfielder, who showed up wonderfully well in his first appearance as a big leaguer. He made a hit in each game and two marvelous catches in the outfield and, altogether, made a wonderful showing, all things considered.”6 The subhead to the game story read, in part, “Work of Almada a Bright Spot in Red Sox Double Loss.”

Almada played in 14 more games for the Red Sox in 1933, driving in his first run with a solo homer on September 23 at Fenway Park, off Yankees future Hall of Famer Herb Pennock, in a game Boston lost, 16-12. The other two homers in the game were hit by Babe Ruth and Lou Gehrig.7

Almada played for the Red Sox for five years, 1933 through 1937.8 He appeared in 316 games with a .272 batting average and drove in 102 runs, playing all three outfield positions and seven games at first base.9

While he was with the Red Sox, relatively little mention was made of Almada’s ancestry. A year after his debut, there was a Globe story and cartoon by Gene Mack entitled “Hot Tamales in Bean Town.” It noted earlier Red Sox “heroes” Arellanes and Hall and that the 1934 team also featured Native American Roy Johnson playing alongside Almada, in left field, concluding, “An Indian in left field and a Mexican in right. ‘Tomahawks’ and “Hot Tamales,’ what a combination!”10

The article was fact-checked by Jim Sweetman and copy-edited by Len Levin.

1 This also includes Negro Leagues players, none of which – through 1948 – are known to have been born in Mexico. Email to author from Gary Ashwill of Seamheads on September 30, 2021.

2 “Almada Honored Today,” Los Angeles Times, July 23, 1933: D2. The article’s subhead read “Mexicans to Fete Local Boy at Wrigley Field, Who Joins Red Sox in September.” The new Mexican consul in Los Angeles was to present him with a gold baseball, and among those attending were two Hollywood film stars and two professional boxers from the “Mexican colony” in LA.

3 Seattle Indians manager Ernie Johnson (later a scout with the Red Sox) spotted his potential, giving him a shot – but Johnson urged him to quit pitching and become an outfielder. Johnson told college-bound Melo that he’d be “crazy if he wasted his time on the so-called higher education.” Collier’s, August 24, 1935. In one of the earlier deals made after Tom Yawkey purchased the Red Sox, Boston GM Eddie Collins acquired Almada’s contract from Seattle on July 2 but left him on the Indians to continue his development. His older brother Louis Almada was in his sixth year in the Pacific Coast League, playing in 1933 for the Mission Reds of San Francisco.

6 James C. O’Leary, “Tigers Win Twice by Same Score, 4-3,” Boston Globe, September 9, 1933: 4. The article said that owner Yawkey watched from his box atop the roof and “liked the way that Almada conducted himself on his first appearance in major league baseball.”

7 Both Pennock and Ruth were former Red Sox players – and future Hall of Famers – who had been sold to the Yankees.

8 “The Sox had a degree of cosmopolitanism in 1937. At one time in 1937, the Red Sox had players fluent in a number of languages on the team. Mel Almada was born in Mexico and spoke Spanish, Fabian Gaffke was of German ancestry, Gene Desautels of French, and Dom Dallesandro was Italian. Multi-linguist catcher Moe Berg was able to talk reasonably fluently with each.” Bill Nowlin, Red Sox Threads (Burlington, Massachusetts: Rounder Books, 2008), 93.

9 In mid-1937, Almada was traded to the Washington Senators and played parts of three seasons for the Senators, St. Louis Browns, and Brooklyn Dodgers.