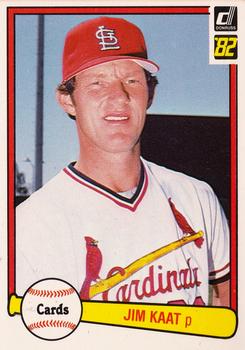 Perhaps the St. Louis Cardinals were taking out their frustration … or sending a message.

On Opening Day 1982, the Cardinals blasted the Houston Astros, 14-3, at the Astrodome. It came on the heels of the 1981 split season in which the Cardinals finished second in the National League East in both halves and did not make the playoffs despite compiling the best overall record in the division.1

Even with the club’s success in 1981—unrewarded as it was—general manager-manager Whitey Herzog bolstered his roster during the offseason, acquiring fleet-footed outfielder Lonnie Smith and Gold Glove shortstop Ozzie Smith in a pair of blockbuster trades.2

The Tuesday-night opener on April 6, played in front of 33,521 fans, featured a pair of veteran right-handed starting pitchers: Bob Forsch of the Cardinals and Nolan Ryan of the Astros, who won the NL West second half in 1981 and lost to the first-half-winning Los Angeles Dodgers in the Division Series in five games.

The Cardinals equaled the franchise record for most runs scored on Opening Day, set April 11, 1928, in a 14-7 victory over the Pittsburgh Pirates at Sportsman’s Park.4

“Everybody wants to experience this, and I’m going to do everything I can to help the situation,” Ozzie Smith said.5

The Cardinals wasted no time getting started against Ryan, sending nine batters to the plate and scoring five runs in the top of the first inning, which lasted 20 minutes. Lonnie Smith was hit by a pitch leading off, stole second base, and advanced to third on an error. One out later, Hernandez walked and Porter stroked a three-run homer to deep right field on an 0-and-2 pitch. Hendrick followed with a single and went to third on a double by Iorg. Steve Braun drove in Hendrick with a single to right and Ozzie Smith’s force out plated Iorg to make it 5-0.

Lonnie Smith singled leading off the second, stole second, and scored on a double to left by Herr. Ryan allowed singles to Lonnie and Ozzie Smith in the third but stranded both runners. He subsequently was lifted for a pinch-hitter after allowing six runs on eight hits with two walks and five strikeouts in three innings.6

“You hope the worst never happens, but this was the worst I’ve ever been with the Astros,” said Ryan, who was beginning his third season in Houston and previously had not allowed more than three runs in a game at the Astrodome.7

The first four Cardinals reached base against Houston reliever Gordie Pladson in the fourth: Hernandez (walk), Porter (double), Hendrick (RBI single), and Iorg (two-run double to left). With one out, Ozzie Smith singled, scoring David Green, a heralded 21-year-old rookie who ran for Iorg, pushing the lead to 10-1 and chasing Pladson.

Back-to-back doubles by Herr and Hernandez leading off the fifth against Mike LaCoss made it 11-1, and Green drove in Hernandez with a two-out single. The Cardinals’ final two runs came in the sixth on a two-run double to left by Hernandez that scored Forsch and Lonnie Smith.

Meanwhile, Forsch profited from the offensive ambush. He pitched eight innings, allowing three runs on seven hits with three walks and one strikeout. Two of the runs came on solo homers by Alan Ashby with two outs in the sixth and Art Howe leading off the seventh. Howe also drove in the Astros’ first run with a second-inning sacrifice fly. Forsch’s only perfect inning was the first, and he faced the minimum in the third after getting former teammate Tony Scott to ground into a double play. Forsch also benefited from the defense behind him, getting noteworthy gems from Green and both Smiths.

“It’s going to be tough to play any better than that, but we’ve got guys who want to play hard every day,” Herr said.8

Jim Kaat worked the ninth, wrapping up the 2-hour, 48-minute funfest while becoming the first major leaguer to pitch in 24 seasons.

“That’s only one [game],” Herzog acknowledged.9

The day wasn’t a complete bust for the Astros. Prior to the game, it was announced that the 1986 All-Star Game would be played at the Astrodome.10 The Astros sought that year’s midsummer classic because planned renovations to their stadium would be completed and it marked the 150th anniversary of the Republic of Texas.

The Cardinals mustered merely two runs the next two games of the season-opening series, as the Astros seized a pair of one-run pitchers’ duels, 3-2 and 1-0.

After losing their home opener to the Pittsburgh Pirates, 11-7, on April 10, the Cardinals reeled off a 12-game winning streak to build an early 3½-game lead in the NL East with a 13-3 record through games of April 24. They went on to win the division with a 92-70 mark—the furthest out of first place they were all season was three games11—returning to the postseason for the first time since capturing the 1968 NL pennant. St. Louis did not lose more than three games in a row until after it clinched and finished three games ahead of the runner-up Philadelphia Phillies.12 The Cardinals swept the Atlanta Braves in three games in the NLCS and defeated the Milwaukee Brewers in an exciting seven-game World Series.

Houston languished throughout much of 1982 and fired manager Bill Virdon on August 10 with a 49-62 record. Under interim skipper Bob Lillis, the Astros went 28-23 to wind up 77-85 and fifth in the NL West, 12 games behind the Braves.13

1 The split season resulted from a 50-day players strike from June 12 through July 31. In both halves the Cardinals played fewer games than the first-place teams (Philadelphia in the first half; Montreal in the second half) and could have caught or surpassed the winners with the opportunity to play the same number of games. The Cardinals had an overall record of 59-43. Cincinnati had the best record in the NL at 66-42 but finished second in the West Division in both halves—behind Los Angeles and Houston, respectively—and did not make the playoffs.

2 In a three-team deal on November 20, 1981, St. Louis traded pitchers Lary Sorensen and Silvio Martinez to the Cleveland Indians, who sent catcher Bo Diaz to the Philadelphia Phillies. Philadelphia sent Lonnie Smith to the Cardinals. St. Louis acquired Ozzie Smith from the San Diego Padres in a six-player deal, with pitchers Steve Mura and Al Olmsted also going to the Cardinals in exchange for shortstop Garry Templeton, outfielder Sixto Lezcano, and pitcher Luis DeLeon. Although that trade was announced on December 10, 1981, it was not finalized until February 11, 1982.

6 Ryan went 1-1 with a 2.00 ERA in two additional starts (both complete games) against the Cardinals in 1982. In 18 innings pitched, he allowed four earned runs and 11 hits, with five walks and 15 strikeouts.

7 Hummel, “Cards Opening Act Hard to Top.” In his final 1981 regular-season start at home, Ryan pitched the fifth no-hitter of his career, beating the Los Angeles Dodgers, 5-0, on September 26. Ryan subsequently pitched a two-hitter against the Dodgers in Game One of the NLDS, a 3-1 Houston win on October 6 at the Astrodome.

10 Whitey Herzog was the National League manager for the 1986 All-Star Game after the Cardinals won the pennant the previous season.

11 After a 5-2 loss to the Pittsburgh Pirates on August 4, the Cardinals were three games behind the Philadelphia Phillies. St. Louis moved into first place for good on September 14 with a 2-0 win at Philadelphia.

12 The Cardinals scored a season-high 15 runs in a 15-3 win over Philadelphia at Veterans Stadium on June 29.

13 Lillis remained the Astros manager through the 1985 season. Virdon was hired as manager of the Montreal Expos on October 12, 1982.