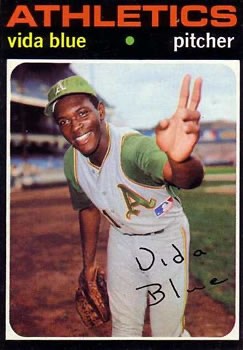 Rain in the San Francisco Bay Area on the evening of April 9, 1971, limited the Oakland A’s and Kansas City Royals to only 5½ innings of baseball. But they packed plenty of action into that limited time, giving the sparse crowd at Oakland-Alameda County Coliseum an eventful game. Some onlookers speculated that Oakland’s talented young starting pitcher, Vida Blue, could have made history if the weather had stayed clear for nine full innings.

Each team had played three games coming into the Friday night matchup, with Bob Lemon’s Royals sporting a 2-1 record and the A’s of Dick Williams stuck at 0-3. Lemon had taken the Royals’ reins midway through the 1970 season, while Williams had just begun his tenure as Oakland manager.

On a more clement night, Blue’s presence among the day’s pitching matchups might have drawn a large crowd to the park. The hard-throwing 21-year-old lefty had pitched a no-hitter and a complete-game one-hitter in September 1970, giving notice of his great potential. But a “continuous downpour” on April 9 helped keep attendance down to just 3,131 fans.1 The game against the Royals was Blue’s 12th major-league start. Blue had made one previous appearance so far in 1971, lasting only 1⅔ innings and taking the loss in an 8-0 defeat against Washington on Opening Day.

Opposing Blue was Jim Rooker, an Oregon-born lefty entering his fourth season in the major leagues. On a Royals team that went 65-97 in 1970, Rooker served as a generally capable starter, going 10-15 with a 3.54 ERA in 38 games. He struggled with control, though, walking 102 hitters against 117 strikeouts in 203⅔ innings. Only two American League pitchers walked more batters.2 The April 9 game marked the 28-year-old Rooker’s first appearance of 1971.

Blue and Rooker set a sizzling pace early on. Blue struck out shortstop Freddie Patek and second baseman Cookie Rojas in the top of the first. Rooker whiffed shortstop Bert Campaneris to start the bottom half of the inning and first baseman Don Mincher to end it – with a walk to left fielder Joe Rudi in between. Blue surrendered the game’s first hit in the second, a leadoff single by left fielder Lou Piniella, but maintained the strikeout pace by whiffing first baseman Bob Oliver and third baseman Paul Schaal. Clearly, a first-class pitchers’ duel was in the offing.

Or at least it seemed that way until the bottom of the second, when Rooker’s control utterly abandoned him. Rooker walked third baseman Sal Bando. He walked center fielder Rick Monday. He walked catcher Dave Duncan, who in parts of five prior big-league seasons had hit above .200 only once. Second baseman Dick Green, a .190 hitter in 1970, batted next – and Rooker walked him too, forcing in a run.

Rooker recovered to strike out Blue, and Campaneris grounded to Schaal at third. But Schaal misplayed it for an error, allowing Monday to score. Rudi’s single to right-center field drove in Duncan and Green. Right fielder Reggie Jackson lofted a fly to Dennis Paepke in right field that brought Campaneris home. Rooker finally got Mincher to line out to center, but the A’s had amassed a 5-0 lead on just one hit. The Kansas City Times summed up the team’s misadventures the next day as “a Royal burst of generosity.”3

Now with the lead, Blue resumed his strikeout pace. Pitching “exceptionally fast,”4 he struck out catcher Jerry May; whiffed Buck Martinez, batting for Rooker; walked Patek; and struck out Rojas to give him seven strikeouts through three innings. The Royals got a runner into scoring position in the fourth: Center fielder Amos Otis reached on an error by Campaneris, and two more strikeouts later, Paepke singled him to third. But Blue escaped the inning without a run by getting Schaal to ground out to Green at second.

Second-year righty Ken Wright took over for Rooker in the third and notched three strikeouts of his own in three innings of work. Oakland moved two runners into scoring position against Wright – Green on a single and a sacrifice in the fourth and Mincher on a pair of walks in the fifth. Neither runner advanced past second base.

Blue recorded only one strikeout in the fifth, of catcher May. As if making up for lost ground, he rallied in the sixth after a leadoff single by Otis and struck out Piniella, Oliver, and Paepke in order. He had 13 strikeouts, which tied him with Jim Nash, Chuck Dobson, and Blue Moon Odom for the most K’s in a game by an Oakland A’s pitcher. (This was a limited distinction, of course, since the team was only beginning its fourth season in the Bay Area.5)

More significantly, Blue was within one strikeout of tying the all-time franchise record of 14 in a nine-inning game, set by Rube Waddell three times between 1903 and 1905 and Jack Coombs in 1910, when the A’s called Philadelphia home. And his strength as the game wore on led sportswriters to speculate that he was on track to tie or break the American League record of 18 K’s in a nine-inning game, set by Cleveland’s Bob Feller in 1938.6 But crew chief John Rice, umpiring at second base, ordered a rain delay after 5½ innings. After a 34-minute delay, Rice checked the soaked field once more, then called the game.7

An unnamed A’s player told a sportswriter, “If that game had gone on, I know he would have struck out 19 or 20 of those cats.” Catcher Duncan said he’d never caught a faster pitcher, while the Royals’ Oliver – who struck out three times – compared Blue to Cleveland’s fireballing Sam McDowell. Blue credited both his fastball and his curve for his success, and said he wasn’t bothered by thoughts of what he could have accomplished in a full game: “I didn’t mind when they called the game. I mean, I was looking for that first victory.”8 Another account quoted Blue as saying, “I’m just happy to win the game. There will be lots of chances for strikeouts other times.”9

Blue’s faith in the future was well-placed. He went on to finish in his league’s top 10 for strikeouts seven times, with a career-high 301 in 1971 earning him second place behind Mickey Lolich’s 308. He burst out with a 24-8 record in 1971, leading the league in ERA (1.82) and shutouts (eight), and winning both the Cy Young Award and American League Most Valuable Player Award. In company with Blue’s emergence, the A’s went on to win the American League West in 1971, consecutive World Series titles in 1972 through 1974, and the AL West again in 1975.

Image of 1971 Topps card #544 downloaded from the Trading Card Database.

2 They were Sam McDowell of Cleveland, with 131 walks, and Mickey Lolich of Detroit, with 109. McDowell and Lolich achieved these totals in significantly more innings than Rooker, working 305 and 272⅔ innings respectively.