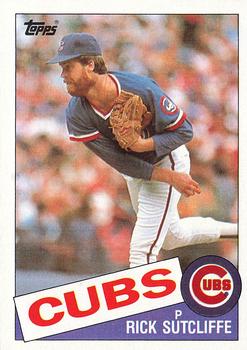 A season after leading the Chicago Cubs out of a 39-year postseason drought, Rick Sutcliffe was Chicago’s Opening Day starter in 1985. He continued his run of excellence on a chilly afternoon at Wrigley Field, pitching into the eighth inning before Lee Smith’s bullpen assist secured the Cubs’ 2-1 win over the Pittsburgh Pirates.

Chicago acquired Sutcliffe in a trade with Cleveland in June 1984, just as the veteran right-hander was healing from the effects of a dental abscess and oral surgery.1 He responded with 16 wins in 17 decisions, spearheading Chicago’s first postseason berth since 1945. Sutcliffe punctuated his remarkable stretch with a complete game in the Cubs’ National League East-clinching 4-1 win on September 24 in Pittsburgh, facing just 28 batters and missing a perfect game by only a fluke triple and a bunt single.2

After pitching seven innings and hitting a home run in the Cubs’ 13-0 win over the San Diego Padres in Game One of the National League Championship Series, Sutcliffe ran out of steam in Game Five of the NLCS, allowing six runs in the sixth and seventh innings as the Padres rallied from a 3-0 deficit to reach the World Series. Still, his rewards were handsome: the NL Cy Young Award,3 a five-year contract,4 and starting honors for Chicago’s 1985 opener.5

The Cubs backed Sutcliffe with an Opening Day lineup that resembled the alignment from their last stand of ’84 in San Diego — with one prominent change. Rookie Shawon Dunston, drafted first overall out of high school in 1982, replaced veteran Larry Bowa at shortstop. Manager Jim Frey had announced late in spring training that Bowa, age 39 and a major-league starter since 1970, would step aside for the 22-year-old Dunston.6

Sutcliffe took Wrigley Field’s mound on a cold, sunny afternoon. The game-time temperature was 35 degrees. The 1984 divisional championship flag, raised in a pregame ceremony, flapped in a 13 MPH wind, blowing in from right field to left. Sutcliffe fanned Marvell Wynne on an inside fastball to start the season. Wind-hindered fly balls by Johnny Ray and Bill Madlock retired the side.

Pittsburgh’s Rick Rhoden opposed Sutcliffe. The 31-year-old Rhoden, like Sutcliffe a product of the Los Angeles Dodgers farm system, had given the Pirates five solid seasons after missing almost all of 1979 with a shoulder injury. Rhoden’s 2.72 ERA in 1984 was fourth-best in the NL; Pittsburgh had finished last in the NL East despite the league’s top ERA.7

Leadoff hitter Bob Dernier grounded Rhoden’s first pitch into the hole between short and third. Shortstop Tim Foli, a starter on Pittsburgh’s 1979 world champions who had returned in an offseason trade with the New York Yankees,8 backhanded the ball but had no chance to throw out Dernier at first.

Reigning NL MVP Ryne Sandberg was up next; the “daily double” of Dernier and Sandberg had ignited the Cubs offense in 1984.9 Rhoden tracked Dernier with a series of pickoffs. On the sixth pickoff attempt, he caught Dernier stepping toward second. First baseman Jason Thompson applied the tag, and Dernier was out.

Sandberg took a called third strike, and Rhoden moved closer to getting out of the inning unharmed when threw two strikes to Gary Matthews. But Matthews fought off an inside pitch and dropped a broken-bat double down the right-field line. Leon Durham hit a grounder into the hole at short; it was again too far to Foli’s right for a play at first. Cubs were on first and third.

Keith Moreland lifted a single just over Foli and into left. Matthews scored for a 1-0 Chicago lead.

Pittsburgh threatened to tie the game in the second, third, and fourth innings, but Sutcliffe denied them each time. Thompson led off the second with a walk, bringing up George Hendrick. Seeking to upgrade their offense after 1984’s struggles, the Pirates had added three veteran outfielders: Steve Kemp,10 Sixto Lezcano,11 and Hendrick, a longtime St. Louis Cardinals slugger who cost Pittsburgh starting pitcher John Tudor and utilityman Brian Harper.12

Hendrick grounded slowly to short; Dunston threw to second for the force. After Tony Peña’s roller to third moved Hendrick to second, Doug Frobel fanned on a low breaking ball to end the inning.

In the third, Rhoden and Wynne singled after one out. Ray smashed an opposite-field line drive to left, but directly at Matthews. Madlock watched Sutcliffe’s breaking ball catch the outside corner for the third out.

Thompson led off the fourth by turning on an inside pitch and dropping it barely inside the line in right for a double. Moreland protested that the ball had struck the wall in foul territory, but the umpires stuck with their call.

Sutcliffe’s one-strike pitch to Hendrick bounced off Jody Davis’s glove and kicked toward the first-base side of home plate. Thompson attempted to move to third. But Davis recovered the ball and gunned down the slow-footed Thompson. The Pirates remained scoreless through four.

Meanwhile, Rhoden kept Chicago off the scoreboard in the second and third. But he fell behind Moreland 3-and-1 to start the fourth. The next pitch was a fastball. Moreland lined it over the fence in left field for a 2-0 Cubs lead.

Sutcliffe and Rhoden both held the line through the middle innings. Dunston fielded Wynne’s two-out hopper near second in the fifth and threw wildly to Durham’s right for an error, but the rookie followed with a strong throw on Ray’s grounder to end the inning. The Cubs put two on with two out in their half of the fifth; Moreland worked the count full but flied to center for the third out. With two outs in the sixth, Dunston lined his first major-league hit, to right field, but Rhoden retired Sutcliffe to end the inning.13

Rhoden finally hit the wall after setting down Dernier and Sandberg to begin the bottom of the seventh. Matthews — whose 103 walks in 1984 had led the NL — worked the count full before watching ball four tail inside. Durham followed with a single to left, putting two runners on with two outs.

Sutcliffe was still on the mound in the eighth. Batting for Tekulve, Lee Mazzilli sliced a line drive to left. Gary Woods — who remained in the game after running for Matthews in the seventh — attempted a diving catch, but the ball hit the grass and bounced past him. Dernier hustled to back up while Mazzilli reached second with a double.

After Wynne tapped back to Sutcliffe for the first out, Ray fell behind 0-and-2, fouled off three pitches, and drew a walk. Madlock lined solidly to center, but right at Dernier.

Thompson bounced Sutcliffe’s 130th pitch of the game sharply into center field for a single. Mazzilli scored from second. Ray raced to third. The Cubs’ advantage was down to 2-1.

Frey summoned Smith from the bullpen to face Hendrick with the tying run on third. Well-established among the game’s top closers, the 27-year-old flamethrower entered 1985 with the most saves of any National League pitcher over the past two seasons.

As shadows covered the mound, Smith threw two fastballs for called strikes. Davis’s backhand grab of the next offering prevented a game-tying wild pitch. After Hendrick’s flare down the right-field line fell foul, he held off on a slider outside, evening the count at 2-and-2.

Smith wanted to throw another slider; Davis signaled fastball. It zipped past Hendrick’s swing, and the Cubs kept their lead.14

“I was surprised when Jody [Davis] called for a fastball,” Smith said afterward. “Then I thought to myself, ‘Jody has been getting me 29 to 33 saves every year, why not listen?’”15

Smith set down the Pirates in the ninth to close out the game.17

“George Hendrick is one of the great clutch hitters in the game, and I honestly don’t know how I was going to get him out,” Sutcliffe said. “Lee Smith is amazing. There might be guys that save more games, but not many who can strike out George Hendrick.”19

But neither the Cubs nor Sutcliffe recaptured their 1984 magic — or sustained their Opening Day excellence — in 1985. Chicago rolled to a four-game divisional lead by June 11 but then lost 13 in a row and never recovered, finishing fourth with a 77-84 record.21 Sutcliffe’s hamstring, shoulder, and groin injuries forced three stints on the disabled list; he started only twice after July 28.22

In addition to the Sources cited in the Notes, the author consulted the Baseball-Reference.com and Retrosheet.org websites for pertinent material and the box scores noted below. He also used game coverage in the Chicago Tribune, Pittsburgh Post-Gazette, and Pittsburgh Press newspapers; and SABR Baseball Biography Project biographies of several players who played in the game, especially Paul Hoffmann’s biography of Rick Rhoden and Thomas Brown Jr.’s biography of Shawon Dunston. Additional resources included a recording of KDKA-TV’s Pittsburgh television broadcast, provided by Chicago sportswriter Jeff Agrest and available at the YouTube link noted below.

1 Sutcliffe had surgery on an abscessed tooth during spring training in 1983 but did not receive relief from the procedure. Sheldon Ocker, “Sutcliffe’s Return to Form Like Pulling Teeth,” Akron Beacon Journal, June 4, 1984: D4. With his pain persisting at the beginning of the 1984 season, Sutcliffe had oral surgery a second time, on May 4. Ocker, “More Things Stay the Same, More Tribe Lineup May Change,” Akron Beacon Journal, May 6, 1984: E1. On June 13, 1984, the Cubs obtained Sutcliffe from Cleveland in a seven-player deal. Fred Mitchell, “Cubs Trade Hall to Indians: They Get Sutcliffe in 7-Player Deal,” Chicago Tribune, June 14, 1984: 4, 1.

13 Dunston was the Cubs starting shortstop into May, but Chicago demoted him to Triple-A Iowa on May 14; he was batting .194 in 23 games. Fred Mitchell, “Dunston Is Sent Packing After Cubs’ Victory,” Chicago Tribune, May 15, 1985: 4, 1. On August 12 the Cubs recalled Dunston and released Bowa. Fred Mitchell, “Cubs Give Bowa Release,” Chicago Tribune, August 13, 1985: 3, 1. Except for missing most of the 1992 and 1993 seasons with a back injury, Dunston served as the Cubs’ regular shortstop until he signed with the San Francisco Giants as a free agent in January 1996.

14 Hendrick batted .230 with only two home runs in 69 games with the Pirates in 1985. On August 2 he was traded to the California Angels as part of a six-player deal that also sent John Candelaria and Al Holland to California. Bob Hertzel, “Candelaria, Holland, Hendrick Go to Angels,” Pittsburgh Press, August 2, 1985: D1.