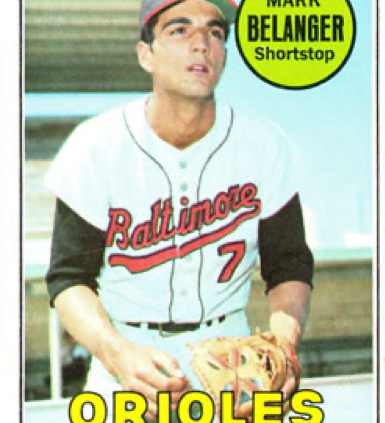 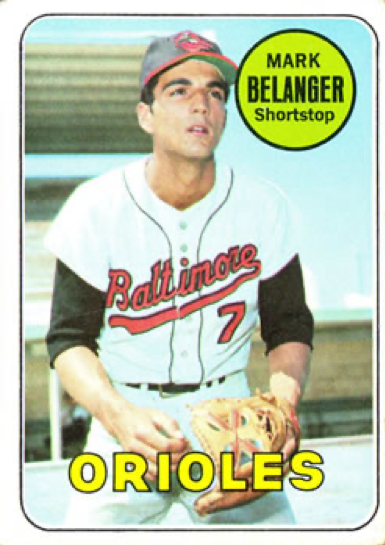 Eight-time Gold Glove winner Mark Belanger was celebrated for his wondrous defense at shortstop but jeered for his weak offense. A lifetime .228 hitter, Belanger was pinch-hit for 333 times in his 18-season career, retiring as the American League’s all-time leader in that category.1 Belanger’s Baltimore manager Earl Weaver even devised a strategy to limit his trips to the plate, using another player to bat in the shortstop’s place in the first inning before Belanger took the field for the rest of the game.2

In 1969, though, the 25-year-old shortstop burst out with a career-high .287 batting average and 50 RBIs in his second season as a major-league regular. He ranked sixth in the AL in singles, one of the rare times when he placed highly in any positive offensive category.3 One highlight of his uncharacteristically strong offensive season came on a Monday night in mid-August in Seattle. Belanger touched the expansion Pilots’ pitching staff for four hits, including three doubles, and five RBIs. Belanger never collected as many doubles or RBIs in any other game in his major-league career.4

August 1969 found Weaver’s Orioles playing torrid baseball. After dropping three out of four games to Minnesota and Cleveland to begin the month, Baltimore swept the Kansas City Royals in a three-game series. The Orioles then took three straight from the Twins, won two out of three from the Oakland A’s, and won the first three of a four-game series in Seattle. The Oakland series included an 8-0 no-hit victory by Jim Palmer, who had been passed up by Seattle and Kansas City in the October 1968 expansion draft.5

At the start of play August 18, Baltimore boasted an 84-35 record and a 16½-game lead over second-place Detroit. The Orioles had been especially deadly against the AL West, entering the game with a 43-12 record against teams from that division.6 Belanger entered the game hitting .273, but it was a soft .273: He hadn’t contributed an extra-base hit since July 6 or an RBI since July 27.7

Manager Joe Schultz’s Seattle team was clinging to third place in the AL West with a 48-69 record, 22 games behind the division-leading Minnesota Twins. The team was in the midst of a summer swoon that eventually planted it in the division’s basement. The Pilots posted a 9-20 record in July and followed it with a 6-22 performance in August. Coming into the August 18 game, Seattle had run up a 5-10 record in August. The final game of the Baltimore series was a makeup date for a May 29 game that had been rained out.

Palmer started against Seattle in his first appearance since the no-hitter. He brought an 11-2 record and a 1.77 ERA into the game. His five shutouts placed him second in the AL, trailing only Denny McLain of Detroit, who had eight. A few of Baltimore’s backups started behind Palmer as first baseman Boog Powell and left fielder Don Buford rested.8 Merv Rettenmund played right field and Curt Motton started in left. Frank Robinson, usually Baltimore’s right fielder, started at first base. He ranked among the AL’s leaders in runs, batting average, and on-base percentage. Center fielder Paul Blair, leading the league with 151 hits, hit second in the lineup behind Rettenmund.

Some 19,770 Pilots fans turned out on Helmet Night9 to see whether the home team could salvage the final game of the series. That attendance represented the Pilots’ third-largest paying home crowd, trailing only the 23,657 who saw the New York Yankees on August 3 and the 21,679 who saw Baltimore on May 28. Given the discrepancy in the teams’ records, Seattle pitcher Jim Bouton quipped: “It is decided in the bullpen that the people who came to see us play the Orioles are the same kind who went to see lions eat Christians.”10

The Orioles began to crush the fans’ hopes in the first inning, starting with a Blair single and a walk to Robinson. On a grounder by Motton, Harper made the first of three throwing errors – all on grounders to his right that forced him to throw side-arm on the run.11 Harper’s miscue allowed Blair to score and sent Robinson to third. Second baseman Davey Johnson’s single to center scored Robinson for a 2-0 lead and sent Motton to third. Catcher Andy Etchebarren ended the inning with a grounder to shortstop, stranding Motton at third and Belanger in the on-deck circle.

After the Pilots wasted a leadoff double by Harper, Belanger led off the second with his first two-bagger on a ball that fell between center fielder Wayne Comer and second baseman John Donaldson.12 Palmer beat out a bunt for a single, and another low throw from Harper allowed Belanger to score.13 After Rettenmund’s second strikeout in two innings, Blair flared a single and Robinson doubled to left to make the score 4-0. An intentional walk to Brooks Robinson loaded the bases before Motton singled to third, giving Baltimore a 5-0 lead.

Knuckleballer Bouton replaced Brunet. He threw one of his flutterballs past catcher Jerry McNertney, who was charged with a passed ball as Frank Robinson scored.14 A walk to Johnson reloaded the bases. After Etchebarren struck out, Bouton fell behind on the count to Belanger and had to throw a fastball.15 Belanger pounded his second double of the inning to right-center field, driving in three runs for an 9-0 advantage. Palmer singled his shortstop home for a 10-0 lead, chasing Bouton in favor of Marty Pattin. Pattin surrendered a double to Rettenmund, sending Palmer to third, but retired Blair on a groundout to shortstop.

After being yanked, Bouton lost his temper and got into an argument that involved pitching coach Sal Maglie, bullpen coach Eddie O’Brien, and several teammates. It was one of several interpersonal conflicts for Bouton during his time with the Pilots. Eight days later, the Pilots traded the outspoken hurler to the Houston Astros. Bouton chronicled the game and his arguments in his best-seller, Ball Four, published in 1970.16

Belanger crunched his third double of the game in the top of the fourth, but he overslid third base trying for a triple, and a relay from Comer to shortstop Ron Clark to Harper cut him down and ended the inning.17 Seattle rallied for two runs off Palmer in the bottom half. Davis led off with his fourth homer, to left field. One out later, McNertney hit his only triple of the season, off the left-center-field fence, and Donaldson doubled him home to make the score 10-2.

Palmer, who went 3-for-5 at the plate, began the fifth inning with a double off John O’Donoghue but advanced no farther. Comer’s solo home run to left-center field in the bottom half brought the Pilots within seven runs. Baltimore bounced back in the sixth, starting with a single, a walk, and a groundout that put runners on second and third. Belanger’s single to right drove in both runners for a 12-3 lead. Harper’s third error and a walk filled the bases again. But Seattle’s fifth pitcher, John Gelnar, got Frank Robinson to ground out to Clark.

The offenses largely cooled down the rest of the way. Harper added to his league-leading stolen-base total in the seventh with a two-out single and a steal of second. A groundout ended the frame. Harper was the only baserunner Palmer allowed between Comer’s fifth-inning home run and the ninth, when Donaldson singled to right field with one out. Clark grounded Palmer’s 119th pitch18 to offensive hero Belanger, who started a 6-4-3 double play that wrapped up the game in 2 hours and 43 minutes.

It was the second time in three games that the Orioles lit up the Pilots for double-digit runs: Baltimore had beaten Seattle 15-3 on August 16. The loss dropped the Pilots out of third place, a position they never held again. Two nights later they fell to fifth, and on August 29 they fell into sixth and last place.

After the game Palmer said his curveball was “probably better than it has been all year.”19 Belanger credited coach Charley Lau for batting tutelage. “He got me to hit the ball hard on the ground or line drives through the infield. I’m not strong enough for home runs. But it looks like I was strong enough for doubles tonight.”20

Belanger’s offensive surge didn’t last. In 1970 he reverted to a .218 batting average, one homer and 36 RBIs. He is sometimes credited with the unofficial distinction of “Triple Crown loser” – the batter with the lowest batting average, fewest HRs, and fewest RBIs among qualifying players.21 He also had the AL’s lowest slugging average, .259. Despite Belanger’s weak hitting, the 1970 Orioles captured the World Series title, the only championship ever won by a team with “The Blade” in its regular lineup.22

Image of 1969 Topps card #299 downloaded from the Trading Card Database.

2 Weaver detailed his “designated pinch-hitter” strategy in his book: Earl Weaver and Terry Pluto, Weaver on Strategy (Lincoln, Nebraska: Potomac Books, 2002). In road games in September 1975, Weaver experimented with using Royle Stillman as his starting shortstop high in the lineup, so Stillman – a stronger hitter than Belanger – would get an at-bat in the top of the first. Belanger would then take the field in the bottom half and play the rest of the game at shortstop.

4 Belanger’s 4-for-5 night represented personal bests for doubles and RBIs, but not for hits. On May 11, 1974, he had five hits in five at-bats against the Cleveland Indians. He collected four singles and a double with no RBIs.

5 Jimmy Keenan, “August 13, 1969: Jim Palmer No-Hits the Athletics,” SABR Games Project, accessed online October 1, 2021. Both American League expansion teams passed on the chance to claim Palmer due to his record of injuries. The pitcher appeared in only nine games in 1967 and missed the entire 1968 season before rebounding to secure a Hall of Fame career.

9 Farber. The Tacoma paper reported that the Pilots ran out of helmets: Ten thousand attendees received the headgear, while 2,300 more received certificates to be traded in for helmets at a later date.

14 The Tacoma paper’s “Pilots Scoreboard” has the passed ball occurring with Brunet on the mound. Baseball-Reference and Retrosheet say it took place after Bouton’s entrance, as does Ball Four.

21 Among qualifying batters in 1970, Belanger tied Ed Brinkman of Detroit with one home run and Sandy Alomar of California with 36 RBIs.

22 The 1966 Orioles, for whom Belanger played eight games, also won the World Series. Belanger was not on the team’s postseason roster.