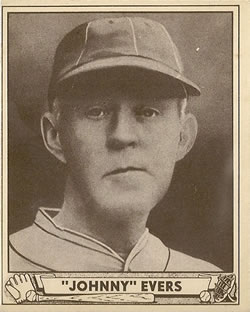 Chicago was saturated with rain. Newspaper boys peddled local dailies announcing eight White Sox acquitted on nine counts of conspiracy to fix the 1919 World Series.1 Cubs manager Johnny Evers was ill, “absent from the ball park,” giving “rise to reports that he had resigned.”2 Team President William Veeck “denied that [Evers] was to be let out.”3 Dr. Edward Ned Redden attended “the stricken manager at the Webster hotel.”4 Evers was bedridden with a fever caused by a cold. Redden worried that it might become pneumonia.

The Boston Braves were in town for a four-game series. A doubleheader was scheduled at Cubs Park at 1:30 P.M. on Wednesday, August 3, 1921, because heavy rain had caused the postponement of Tuesday’s series opener. Boston was in third place at 53-39, six games behind first-place Pittsburgh. The Cubs were floundering at 41-55, 20 games behind the Pirates, mired in sixth place.5

Hopes were high in 1921 with Evers’ return as Cubs manager. He was legendary over 12 seasons as a player with the Cubs, but the return was not triumphant.6 Coming into the Boston series, Chicago had suffered eight losses in nine games. Despite the denials, Veeck planned a managerial change.7 Bill Killefer was announced as the Cubs’ acting manager before the doubleheader, remaining as backup catcher.8

First-year manager Fred Mitchell had the Braves in the pennant race.9 But their recent play had caused concern: “[Boston] will win no pennant playing the game as they have been playing,” commented a Boston sportswriter.10 Mitchell was frustrated by “the folly of careless base running,” announcing “any pitcher who fails to back up first or third will be apt to have his memory refreshed by a substantial fine.”11

The Braves won the first game of the doubleheader, 5-3. The second game was marked by uneven play by the Braves, determined play by the Cubs, and, as the Boston Globe observed, “worse umpiring on the bases by [Bob] Emslie, who, if Chicago had not won the game, might have been roughly handled by the crowd.”12

Walton Cruise walked to lead off the Braves second but was picked off by catcher Bob O’Farrell. Martin retired Tony Boeckel and Walter Holke, ending the inning. The Cubs’ bats continued their impotency: The ball never left the infield.

The Braves jumped ahead 1-0 in the third. With one out, Frank Gibson doubled to right, advancing to third on Scott’s hard single into right. Powell flied out to Babe Twombly in center with Gibson beating the throw home “by a beautiful slide.”14 The fourth saw continued good pitching by Scott, who retired eight Cubs in a row until Grimes walked.

With two outs in the Braves fifth, Gibson “lined out another two bagger” off the right-field wall taking third on Martin’s wild pitch.15 Scott drove him in with “a puny infield hit” when Martin reacted poorly to his “high bounder in front of the plate.”16 After fielding the ball, Martin’s only play was at home, but he failed “to get the ball up in time” to tag Gibson out.17 The Braves were ahead, 2-0.

The Cubs finally broke through against Scott’s dominance for three runs in the sixth. Hollocher led off with a scratch hit up the middle “which Scott made for him by blocking the ball.”18 Kelleher “followed with another safe one.”19 After Grimes fanned, Sullivan was intentionally walked to load the bases. Twombly grounded out to Ford at second, driving home Hollocher for the Cubs’ first run. With two runners in scoring position, Charlie Deal lined a double “which Powell evidently thought was going into the center-field bleachers for a home run.”20 Two runs scored. Deal “pulled up lame with a strained ligament.”21 William Marriott pinch-ran. The Cubs were ahead, 3-2.

The Braves roared back, scoring three runs in the seventh. With one out, Hod Ford smacked his second homer of the season, into the left-field bleachers, tying game, 3-3. Marriott, who had stayed in the game at second, booted a Gibson grounder for an error. Scott’s grounder to short forced Gibson, but Powell walked, and Barbare “drove [Scott] home with a timely [single] to centre,” advancing Powell to third.22

On a double steal, Powell stole home for the Braves’ third run of inning to make it 5-3.23 On the play, Barbare was called safe at third by umpire Emslie “when he was out by a yard.”24 Killefer was tossed by Emslie for arguing.25

The Braves hoped to add to their lead, but Emslie proceeded to make “a ridiculous decision against the Boston club.”26 Southworth bounded “a ball over Martin’s head and beat Hollocher’s throw to first by a full yard.”27 Called out by Emslie, Southworth “acted very nicely.”28 Observers noted that Southworth “should have been called safe of course and [Barbare] was over the plate with the fourth run of the inning.”29 Southworth was quietly dismayed “but the crowd sprung in raucous laughter with rapid fire jeering comments with a few pop bottles injected into the scenery.”30 The sound “was eloquent.”31 League President John Heydler was in attendance, seeing “it all – the poor work and the wild demonstration of the protest.”32

In the Cubs’ seventh, Scott allowed only Hollocher’s third single, and the Braves went down in order in the eighth. The Cubs rallied once more in the eighth, eradicating the Braves’ two-run lead with four runs off Scott and relief pitcher Hugh McQuillan. The Cubs’ comeback started when Cruise misplayed Sullivan’s fly ball along the left-field bleachers, playing “marbles with the ball on the ground long enough to let Sullivan make third.”33 Even though no error was given, “it was a square muff.”34 Twombly smacked a liner to Southworth behind the lip of the infield, “which looked like a tip for Mitchell to introduce another pitcher.”35 Sullivan held at third, but then scored on Marriott’s weak single over short, cutting Boston’s lead to 5-4.

Marriott advanced to second as O’Farrell was thrown out on a grounder to Ford. With two outs, Scott “was allowed to remain too long on the rubber.”36 He faced Tom Daly, batting for Martin. Daly won the battle, singling to center and driving in Marriott. The game was 5-5.

Mitchell finally relieved Scott with McQuillan, who failed to stop the Cubs’ attack. McQuillan gave up a double to Flack and intentionally walked Hollocher, loading the bases. He allowed an inherited runner to score when Kelleher broke the tie by singling into left, driving in Daly and Flack. With the last out, Cubs were ahead 7-5.

The Braves threatened to tie the game in the ninth. Buck Freeman relieved Martin to close the game.37 With two outs, Lloyd Christenbury batted for McQuillan and beat out an infield hit. Powell singled into center. But Barbare grounded weakly to Hollocher, forcing Gibson at second for the final out. Over 1 hour and 59 minutes, the Cubs played “like a different aggregation” under Killefer.38 Emslie left the field upon the last out, “showered with wads of paper as he was making his way to the dressing room.”39

Mitchell may have regretted leaving Scott in the game. The Braves “blundered and sins of commission and omission” took them from “the very verge of annexing a badly needed victory” to a split doubleheader.40 Twice the Braves had two-run advantages. The Braves’ “lack of fight and the weakening of Scott robbed the Tribesmen” of a needed win in a tight pennant race.41

Scott absorbed his fifth loss of the season, giving up nine hits and six runs in 7⅔ innings. Scott led the National League with 47 appearances in 1921, going from a gaudy 12-5 to a pedestrian 15-13.42 Martin with six hits and three earned runs surrendered in eight gritty innings registered his seventh victory toward a career high of 11 wins.43

The Cubs finished seventh in the National League at 64-89, 30 games behind the first-place Giants. Unable to keep its early pace, Boston remained in fourth, slumping to 79-74, 15 games out of first place.44

The Cubs’ board of directors asked Evers “to take a rest for a few days.”45 Later, Veeck announced with regrets that Evers “was deposed today as manager.”46 Killefer was named manager the next day, making “an enthusiastic address which was greeted by cheers by his teammates.”47 Told he was let go, Evers went home to Troy, New York. He was paid his full salary for the season.

1 The rest of the non-baseball world mourned the death of tenor Enrico Caruso on August 2, 1921.

7 “New Pilots May Turn Up in National Loop.”

9 Mitchell relieved Cy Young in the first Boston Americans game, on April 27, 1901. He managed the Cubs from 1917 to 1920, leading the team to the 1918 National League pennant. He was fired as Cubs manager at the end of the 1920 season and immediately hired by the Braves.

12 O’Leary. Emslie had a 33-year career as a major-league umpire, retiring at the end of the 1924 season. Upon retiring, Emslie became the National League’s chief of umpires.

23 Because of the Marriott error, the Scott and Powell runs were unearned.

37 If saves were an official statistic in 1921, Freeman achieved his third save of the season.

42 Prior to spring training in 1922, the Braves traded Scott to Cincinnati for pitcher Rube Marquard and infielder Larry Kopf.

44 Mitchell’s prior success in Chicago did not follow him to Boston, where he lost 100 games in both 1922 and 1923. Mitchell was fired after the 1923 season. Mitchell returned to manage the Harvard University baseball team, where he had previously coached baseball in 1916.

47 “Evers Disposed in Killifer’s Favor.” Killefer was manager of the Cubs until he was fired 75 games into the 1925 season.