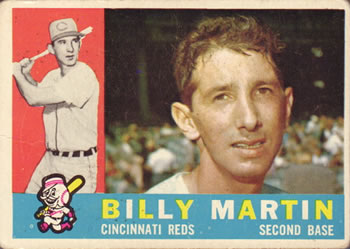 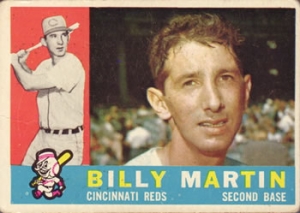 The Cincinnati Reds were little more than a year from winning the 1961 National League pennant, but that was a faraway possibility when they concluded a four-game series in Wrigley Field with the hapless Chicago Cubs in early August of 1960. With a 43-56 record, the Reds trailed all of their NL rivals except the Philadelphia Phillies and the Cubs. Chicago’s 37-61 mark had them in last place.

The North Side faithful did not turn out in droves. Only 4,209 fans showed up to watch Cubs rookie left-hander Jim Brewer face veteran righty Cal McLish. Brewer, who was less than three weeks into his major-league career,1 was making his fourth start of the season.2 McLish was coming off a 19-win 1959 season with the Cleveland Indians.

The Reds managed eight hits off three Cubs pitchers in a 5-3 loss. But the game’s biggest hit didn’t come off a bat. It occurred in the second inning and belonged to Billy Martin.

Brewer got off to an inauspicious start in the top of the first. He walked leadoff batter Martin. Vada Pinson followed with a base hit, sending Martin to third. Gus Bell’s single drove in Martin and sent Pinson to third base. One out later, third baseman Cliff Cook hit the third single of the inning, driving in Pinson to give the Reds a 2-0 lead. Brewer worked out of further trouble. In the home half of the first, the Cubs put two men on base via singles, but McLish induced Ron Santo to ground out, ending the threat.

With two out and the bases empty, Martin came up for the second time. At age 32, he was on his fourth team in four years after the New York Yankees traded him to the Kansas City Athletics in 1957.

Martin swung and missed at the next pitch and lost the grip of his bat. The bat landed about 10 feet to the right of Brewer. Whether or not Martin deliberately threw the bat is debatable. Martin insisted it was accidental.

Regardless, a moment later, Martin and Brewer were fighting and both benches emptied. Martin struck Brewer with a right hand, fracturing the orbital bone below Brewer’s right eye.

Who instigated the fight? That depends upon which side you believe.

Brewer claimed he was sucker-punched. According to the Cubs pitcher, he asked Martin, “Do you want to fight? Billy said, ‘No kid, I just came after the bat.’ And then he swung at me.”3

Not surprisingly, Martin’s version differed. “I was in the hospital last year when I got hit in the face [by Tex Clevenger of Washington when Martin was with Cleveland] and I have had several fractures.4 Nobody’s going to throw at my head again. They can break my ribs, they can throw at my body, but not my head. That first pitch [by Brewer] was behind my head and Cub pitchers knocked me down three times Wednesday. I didn’t throw the bat – it just slipped out of my hands. Nothing would have started, but he said some things to me, giving me a lot of mouth, so I hit him. If he hadn’t said anything, I would have picked up the bat and gone back to the plate.”5

During another interview, Martin said, “When I went to get [the bat], Brewer came off the mound. ‘Are you looking for a fight?’ he said. I didn’t answer him. Then he said, ‘Now you’re really going to get knocked down.’”6

Brewer could not continue. He was taken to a hospital and replaced by Joe Schaffernoth. Home-plate umpire Stan Landes ejected Martin. The game resumed. Eddie Kasko batted for Martin. He struck out looking,7 ending the wild inning.

The Cubs got a run back in their half of the third. Bob Will doubled. A looping single to right field off the bat of Ernie Banks drove Will home.

The score remained 2-1 Reds until the bottom of the sixth inning. The Cubs’ Richie Ashburn dropped a successful bunt to the left of home plate to begin things. Banks followed with his 30th home run of the season, “a resounding drive that cut through a strong headwind and sailed deep into the left-field bleachers.”8 The Cubs had a 3-2 lead.

The Reds got even in the seventh. Gordy Coleman drilled a single to center. He advanced to second on a fielder’s choice and scored the tying run on Jerry Lynch’s single to right.

The Cubs went ahead for good in their half of the inning. With one out, Sammy Taylor ripped a single over second base. Don Zimmer pinch-hit for Schaffernoth and lined a double over the shortstop. With runners on second and third, Reds manager Fred Hutchinson called on lefty Bill Henry to face the left-hand-hitting Will. The strategy backfired. The ex-Cub Henry got two quick strikes on Will but then hung a curve. Will hit it into left-center for a two-run single. Jim Brosnan – whose diary of the 1959 season, The Long Season, had been published four weeks earlier – replaced Henry and got the final two outs of the inning.

Cubs skipper Lou Boudreau called on Seth Morehead to close out the game. Morehead pitched two scoreless frames to pick up the save and preserve the 5-3 Cubs win, aided by some spectacular defense. With one out in the ninth, Ed Bailey reached on an infield single. Claude Osteen ran for Bailey. Roy McMillan hit a slicing drive toward the right-field line. Will grabbed it and threw to first, doubling Osteen off first to end the game.

Two days later, on August 6, Brewer underwent three hours of surgery to repair the shattered bone below his eye. A team of three surgeons worked on the Cubs pitcher. He wouldn’t pitch again until the following season.

National League President Warren Giles suspended Martin for five games and fined him $500. Boudreau was outraged. He said, “If I were president of the league, I would have fined Martin at least $1,000 and kept him under suspension day for day, until Brewer is fit to pitch again.”9

Martin appealed the ruling. A hearing was held August 9, but Giles upheld the fine and the suspension.

Brewer’s pitch and Martin’s reaction to it reignited an ongoing baseball controversy. For example, Illinois State Assistant Attorney Frank Ferlic said, “If I had been in the stands at Wrigley Field, I would have signed a citizen’s complaint charging [Martin with] assault.”10 Chicago sportswriter David Condon had a different take: “It often turns out that the batter was goaded into his tantrum. … So the thought here is that baseball must do more than penalize the Billy Martin type of pepperpot batter who cannot control their temper.”11

Baseball’s oldest living ballplayer at the time, 98-year-old William Ellsworth “Dummy” Hoy, said, “The disgraceful affairs between the Cincinnati Reds and the Chicago Cubs in Chicago the other day was enough to cause Abner Doubleday and Judge Landis to turn over in their graves.”12

The Baseball Law Reporter blog provides an excellent account of the lawsuit filed by Brewer and the Cubs against Martin. Brewer sought $1,040,000, seeking compensatory and punitive damages. The case was eventually settled out of court for $10,000.13

After the season, Martin was sold to the Milwaukee Braves. He retired after the 1961 season and in 1969 became manager of the Minnesota Twins. Brewer went on to have a 17-year major-league career with the Cubs, Los Angeles Dodgers, and California Angels. Tragically, both Martin and Brewer died in automobile accidents, nearly two years apart. Brewer died on November 16, 1987. He was 50 years old. Martin died December 25, 1989. He was 61.

Thanks to John Fredland and Len Levin for editing and Laura Peebles for fact-checking this article.

1 Brewer was 8-4 with Houston of the American Association when the Cubs called him up on July 15.

7 The strikeout was charged to Martin.