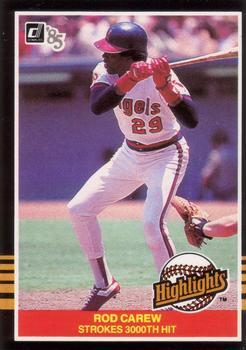 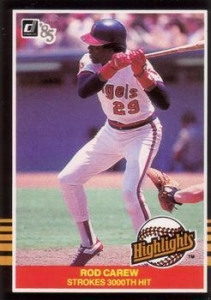 Rod Carew debuted with the Minnesota Twins in 1967, was the American League Rookie of the Year, and had 12 productive years with the team. His best season was 1977, when he did it all, finishing with a batting average of .377 and earning the league’s Most Valuable Player Award.

All was not well in Minnesota, though, as the demise of the reserve clause and dawn of the free-agent era was gutting the Twins. Larry Hisle and Lyman Bostock left after 1977, and it was apparent that Carew might be on his way out, too. Twins owner Calvin Griffith didn’t help with racist comments he made in a Lions Club speech in southern Minnesota in September 1978.1

Carew finished his time with Minnesota, leading the league in batting average for the seventh time in 1978, and Griffith tried to work out a trade to at least get something in return for him. The first one, to San Francisco, Carew vetoed,2 but he then agreed to a deal that sent him to the California Angels for four players.3

Unlike some who had left through free agency, Carew was still popular in Minnesota; in the Twins’ 1979 home opener, which happened to be against the Angels, he got a standing ovation4 during the pregame introductions. Carew never again approached the big seasons he had with the Twins in the mid-1970s,5 but it was apparent that he was going to eventually reach 3,000 hits with the Angels.

The countdown was already looming in a 1983 game at the Hubert H. Humphrey Metrodome in Minneapolis. After Carew’s fourth-inning single on August 3, the scoreboard flashed the news that the hit was the 2,800th of his career. The crowd rose with an ovation, and Carew, with a befuddled look, took off his helmet and waved it at the fans. A few seconds later, the scoreboard flashed a correction: It was only his 2,790th hit. On first, Carew’s face changed from bemused to amused.6

Two years later, he faced his ex-mates again, this time in Anaheim. On Saturday, August 3, Carew got his 2,999th hit (no one was miscounting this time) in the third inning off Bert Blyleven, a former teammate, who was making his first appearance in his return to the Twins after being acquired in a trade from the Cleveland Indians two days earlier. In the sixth, Carew lofted a soft fly into shallow left-center. Shortstop Ron Washington ran back and made an over-the-shoulder catch to rob Carew of what would have been the milestone. The California fans booed Washington each of the two times he came to the plate after that.

Number 3,000 had to wait a day—one on which another star, with a parallel career to Carew, was closing in on history across the country. Tom Seaver of the Chicago White Sox was going for his 300th career win in New York, the city of his lasting glory (although he was pitching against the Yankees, not the Mets, with whom he had received three Cy Young Awards). Like Carew, Seaver was a Rookie of the Year in 1967.

Carew had a mostly sleepless night and was determined to get his hit before the home fans. The Angels were scheduled to host the Seattle Mariners after the Twins’ series, but a players strike that week was a possibility. Taking no chances, manager Gene Mauch, who had managed Carew in Minnesota during the 1977 MVP season, put him in the lineup. Under other circumstances, Carew might have gotten a rest, especially since it was a day game following a night game, against a left-hander, Frank Viola.

Another southpaw, John Candelaria, was making his Angels debut after a trade from the Pittsburgh Pirates two days earlier. He retired the first seven Twins before walking Tim Teufel, who went to third on a single by Dave Meier and scored on Kirby Puckett’s sacrifice fly to give Minnesota a 1-0 lead. The Angels got it back in the bottom of the third on a one-out homer by Dick Schofield. Brian Downing walked, and Carew, who had grounded out his first time up, stepped in. Viola’s first pitch was wild, sending Downing to second.

After a called strike, Carew lined a single to left. As Downing stopped at third, Carew pulled in at first with his 3,000th hit, the first player to reach the mark since Carl Yastrzemski in 1979.

First-base coach Bobby Knoop gave Carew a shoulder pat. His first handshake came from Twins first baseman Kent Hrbek, who had grown up a short distance from Metropolitan Stadium in Minnesota and had seen many of Carew’s hits between 1,000 and 2,000. Teammates ran out to congratulate Carew, and Mauch helped pry out first base to keep as a memento.7 At the end of the inning, which ended with Bobby Grich grounding into a double play, Angels owner Gene Autry came onto the field for a presentation with Carew.

About a half-hour later, in the Bronx, Seaver retired Don Baylor with his 145th pitch of the game, completing a six-hitter in a 4-1 win for his 300th victory.

Back in California, the Angels took the lead in the fourth when Doug DeCinces led off with a single. With one out, Juan Beniquez hit what looked like a double-play grounder to Teufel at second. However, shortstop Washington dropped Teufel’s flip for a force out. Gary Pettis singled to score DeCinces, and Bob Boone followed with a run-scoring single. After a balk, Pettis scored on Schofield’s sacrifice fly.

Minnesota tied it with three in the fifth on Puckett’s two-run single and Washington’s sacrifice fly, then took the lead in the sixth on a one-out double by Mickey Hatcher and Gary Gaetti’s two-out single off reliever Stew Cliburn. The Angels came back with a leadoff walk by George Hendrick, who scored the tying run on a triple by Beniquez. Viola retired the next three batters without Beniquez scoring and pitched into the seventh before giving way to Frank Eufemia.

With one out in the last of the eighth, Pettis reached on an error by Teufel and stole second. The Twins intentionally walked Boone. As Reggie Jackson came out to hit for Schofield, lefty Pete Filson relieved Eufemia. Jackson forced Boone at second with Pettis going to third. Ron Davis came in to face Downing, who singled to score Pettis.

Donnie Moore pitched the ninth. The Twins loaded the bases with two out, but Roy Smalley III (Mauch’s nephew) grounded out to end the game. With a series sweep, the first-place Angels improved their record to 60-44, while the sixth-place Twins dropped to 13 games behind.

Carew’s quest for the hit had been delayed by injuries. He had hoped to reach 3,000 earlier in the season, and by the time he did, there was more focus on Seaver going for his 300th win and also on Pete Rose, who was barely a month away from breaking Ty Cobb’s record for career hits. Carew had cut off interviews with reporters as his milestone approached.8

But after Carew got his big hit, he spoke to the reporters. “I haven’t been able to sleep the last two weeks thinking about this. … I’m just glad it’s over so I can sleep at night.”9 Carew talked of how he was happy to reach 3,000 hits against the Twins, with a couple of his original teammates as onlookers: Tony Oliva, who was now a coach for Minnesota, and Harmon Killebrew, a Twins broadcaster. He also addressed his issues with the media. “I never had a good relationship with the press. But I don’t think I ever got the recognition I deserved.”10

The recognition issue came up again in the August 12 issue of The Sporting News, which had a photo of Seaver on the cover and a significant article about him in the opening pages. “Related stories of two more milestone men on page 17” was at the bottom of the Seaver tribute. Even on page 17, the story of Carew’s 3,000th hit took second fiddle to an article on Dave Kingman approaching his 400th home run.

Barry Sears had a response in “Voice of the Fan” in the September 2 TSN: “I can recall many times that more than one face has appeared on the cover of your magazine. It was certainly a rarity that these two future Hall of Famers should reach such milestones on the same day, but don’t punish one because he might not be as photogenic.”11

Carew was hitless the next night, against Seattle, as the strike occurred. It was a short one, only two days, and the Angels were in Minnesota when the season resumed, a homecoming for both Carew and Blyleven, who was making his first appearance in Minnesota after being reacquired by the Twins.

Carew was back in Minnesota a few days later. The game after his 3,000th hit, he went hitless against Seattle.  All teams then had two days off because of the strike. The season resumed with a homecoming in Minnesota for two players, who had been teammates. Blyleven got an ovation as he took the mound, and Carew got his as he stepped in as the leadoff hitter. Carew promptly doubled, giving the Minnesota fans the chance to see his 3,001st hit.

The author accessed Baseball-Reference.com for box scores/play-by-play information (baseball-reference.com/boxes/CAL/CAL198508040.shtml) and other data, as well as Retrosheet.org (retrosheet.org/boxesetc/1985/B08040CAL1985.htm).

1 Griffith told the group he moved the Twins to the state when he found out Minnesota had only 15,000 Blacks. Griffith added, “We came here because you’ve got good, hardworking white people here.” Carew responded by saying he wasn’t going to “be a n****r on Calvin’s plantation.” Nick Coleman, “Griffith Spares Few Targets in Waseca Remarks,” Minneapolis Tribune, October 1, 1978: 1A; Gary Libman, “Angry Carew Vows He Will Not Play for Griffith’s Twins Again,” Minneapolis Tribune, October 2, 1978: 1A. (The Libman story has Carew’s reaction and plantation comment.)

6 Memory and scorebook of the author.

8 Before the Friday series opener against the Twins, he initially refused to talk Minnesota reporters Gregg Wong of the St. Paul Pioneer Press and Dennis Brackin of the Minneapolis Star and Tribune. The Twin Cities duo continued hanging around the California dugout, and eventually Carew approached them. “I’m getting tired of your hang-dog looks,” he told them and began talking, mostly about his reputation of being aloof. Described by Wong as “cordial and candid,” Carew said, “I don’t walk around with a smile on my face. But that’s just not the way Rod Carew is. I’m just as happy inside as the people who smile on the time on the outside. I’m content with myself, and that’s the only thing that counts.” Conversation with Gregg Wong, July 5, 2021. Dennis Brackin, “Carew Silently Continues Quest for 3,000th Career Hit,” Minneapolis Star and Tribune, August 3, 1985: 7D. Gregg Wong, “Carew Never Dreamed He’d Get 3,000 Hits,” St. Paul Pioneer Press, August 3, 1985: C1.