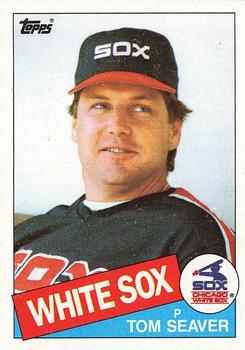 “Whenever he talked about it in the years after, Seaver always said he was most proud of win number three hundred being a complete game.”—Bill Madden1

The juxtaposition of season, person, and place was perfect. The dog days of summer. Tom Seaver on the mound. A packed stadium in New York City. It had become commonplace since it first occurred in 1967, when Seaver was a 22-year-old phenom with the New York Mets and soon to become one of the game’s great pitching stars. For starters, his major-league-leading 25 wins spearheaded the Mets to their storybook World Series title in 1969, earning Seaver the first of three National League Cy Young Awards. Seaver’s 19 wins, leading the Mets to the equally improbable National League pennant in 1973, earned him his second Cy Young Award. His 10 All-Star Game selections as a Met appropriately placed him among his peers.

But this day, the first Sunday afternoon in August of 1985, was different. Seaver wasn’t wearing the Mets’ home whites; he was wearing the road grays of the Chicago White Sox.2 He wasn’t toeing the rubber at Shea Stadium; he was ready to pitch at Yankee Stadium in front of 54,032 fans.

Seaver had spent 12 seasons as the Mets’ ace, in between two stints (six campaigns) with the Cincinnati Reds. Lost to the White Sox during the winter of 1983-84, his return to the Mets a casualty of baseball’s convoluted free-agent compensation system, Seaver was now in his second season with Chicago. His pitching record at all three stops made Cooperstown a certainty—299-189, 3,492 strikeouts, 227 complete games.

The occasion was historic. If you were the 40-year-old Tom Seaver, there was no time to waste. The White Sox opened their road trip five days earlier against the Boston Red Sox at Fenway Park. Seaver pitched nine innings but squandered an early 4-0 lead, allowing the Red Sox to tie the score at 4-4 in the seventh. When the White Sox pushed across three runs in the 10th and Juan Agosto held on for the save, Seaver had win number 299. The next stop was New York City. But Seaver would have to wait.

It was Phil Rizzuto Day at Yankee Stadium and the ceremonies included retiring the diminutive shortstop’s number-10 Yankee-pinstriped uniform. It was a deserved recognition, but a long ceremony. Seaver started his pregame on-the-field routine before 2 P.M. On two occasions, Seaver had to stop warming up in the bullpen as the ceremonies dragged on. Seaver (11-8, 3.02 ERA) finally took the mound for his first pitch in the bottom of the first inning at 3:06 in front of a crowd that had to be half Mets fans.3 His mound opponent was Joe Cowley (9-4, 3.88 ERA). Back in April, Cowley had pitched his only complete game of the season against the White Sox. He lost 4-3 when he walked rookie shortstop Ozzie Guillén with the bases loaded in the bottom of the ninth inning.

The White Sox tried hard to give Seaver an early lead but some bad baserunning got in the way. Rudy Law opened the game with a single to left but was picked off first by Cowley. Bryan Little walked, but when Harold Baines singled to right, Little was thrown out at third, Dave Winfield to Mike Pagliarulo. In the second inning, a double-play grounder ended a promising two-on, nobody-out threat and Law’s single to open the third inning went for naught when he was caught trying to steal second.

It was the Yankees who scored first. Pagliarulo opened the third with a single to right, advanced to second on a groundout, and scored the game’s first run on Ken Griffey’s RBI single to right. But Seaver was as determined as he was nearly perfect over the next four innings. Winfield reached first on an error to open the fourth inning. Of the next 13 batters who faced Seaver, only Willie Randolph reached base, when he was hit by a pitch in the same inning.

The White Sox needed one inning to turn the game. Cowley opened the top of the sixth by walking Greg Walker. Carlton Fisk’s grounder forced Walker at second and Oscar Gamble followed with a single to right, advancing Fisk to third. Even though Chicago was still scoreless, Yankees manager Billy Martin had seen enough from Cowley, who allowed 12 runners—seven on hits and five on walks—in 5⅓ innings.

Rookie reliever Brian Fisher was greeted by Tim Hulett’s double and Guillén’s single, and the White Sox led 2-1. One out later, Fisher walked Law to load the bases. When Little followed with a single to right, two more runs scored, and the White Sox had a 4-1 lead. It might have been more but Law was thrown out at the plate on Baines’ single. White Sox manager Tony La Russa disagreed vehemently with the call by umpire Derryl Cousins and was ejected.4

Now the game’s outcome was left to Tom Seaver and he was determined to finish the last two innings himself. Seaver conceded later, “I was beat as hell. But there wasn’t a chance in hell I was coming out.”5

Bob Meacham opened the Yankees’ eighth with a single. With two outs, Don Mattingly singled to put runners on first and third, prompting a mound visit by pitching coach Dave Duncan, subbing for the ejected La Russa. Seaver was not coming out of the game. Instead, he struck out Dave Winfield on a full-count changeup.6 Despite the rules that he needed to be in the clubhouse, La Russa saw the moment from the dugout runway leading to the clubhouse.7 He recalled, “There’s a picture in my mind which I’ll never forget about that game. You could see the exhaustion and fatigue in Seaver’s face. That was the most important of those twenty-seven outs, right there!”8

Trouble lurked again for Seaver in the ninth inning. Rookie Dan Pasqua lined a single off the wall, missing a home run by no more than four feet.9 Seaver struck out Ron Hassey and Baines crashed against the wall in right to catch Randolph’s line drive for the second out. Seaver then walked Pagliarulo, bringing the tying run to the plate and prompting another visit by Duncan.

Just as in the eighth, Seaver was not coming out of the game. Pinch-hitter Don Baylor lofted Seaver’s first pitch—and his 145th of the game—to left, Reid Nichols caught it, and baseball history had its 17th 300-game winner.

At the game’s conclusion, Seaver was presented with a silver bowl by the Yankees to commemorate the occasion. It was only fitting that Phil Niekro made the presentation. After all, the 46-year-old Niekro was next in line to win 300 games in his career.

Finally on October 6, 1985, the last day of the regular season, Niekro’s fifth attempt at 300 wins was successful. He became the 18th pitcher to reach the milestone, shutting out the Toronto Blue Jays, 8-0. The next morning, the story was front page in the New York Times.10 However, it was also obvious that New York City’s love affair with Tom Seaver was still in full bloom as was speculation regarding his pitching home for the 1986 season. Dave Anderson’s column, Seaver: ’86 Met or Yank, splashed across the sports pages of the Times above the details of Niekro’s triumph.11 Neither happened and Seaver finished his 20-year career in 1986, pitching for the White Sox as well as the Boston Red Sox.12 Seaver’s career pitching line—311-205, 2.86 ERA, 3,640 strikeouts, 231 complete games, 61 shutouts—led to his induction into the Hall of Fame in 1992, wearing a New York Mets cap.

What about 3,000? While Seaver was spending his Sunday afternoon securing his 300th career win on the East Coast, Rod Carew of the California Angels was collecting his 3,000th career hit on the West Coast, a single to left in the third inning on Frank Viola’s cut fastball. The Angels beat Carew’s former teammates, the Minnesota Twins, 6-5.

The connection between Rod Carew, Tom Seaver, and New York City is unmistakable. Carew honed his baseball skills on the streets and playgrounds in the Bronx near Yankee Stadium.13 He got his first major-league hit on April 11, 1967, in Baltimore when he lined a Dave McNally slider up the middle in the second inning, just nine days before Seaver’s first win in the big leagues.14 At season’s end they were named American League and National League Rookies of the Year.

The Sports Monday page of the New York Times captured both record-setting milestones in layout and story.15 Is it hyperbole to suggest that “baseball may never see such a Sunday again”?16 Maybe not.

The author accessed Baseball-Reference.com for box scores/play-by-play information (baseball-reference.com/boxes/NYA/NYA198508040.shtml), and other data, as well as Retrosheet.org (retrosheet.org/boxesetc/1985/B08040NYA1985.htm). The Tom Seaver baseball card (#670) is from the 1985 Topps series and was obtained from the Trading Card Database.

3 Bill Madden, “An inside account of the day Tom Seaver returns to New York with the White Sox and wins No. 300,” NYDailyNews.com, November 21, 2020, nydailynews.com/sports/baseball/mets/ny-tom-seaver-bill-madden-book-excerpt-20201121-mrqd6pogvvcsrmxymk66wpm7ku-story.html.

12 Seaver won four more games in 1985 after his milestone day at Yankee Stadium to finish the season with a record of 16-11, 3.17 ERA. Seaver won seven more games in 1986, divided between the White Sox and the Boston Red Sox. The breadth of Tom Seaver’s career is described by SABR biographer Maxwell Kates (Maxwell Kates, “Tom Seaver,” SABR Baseball Biography Project).