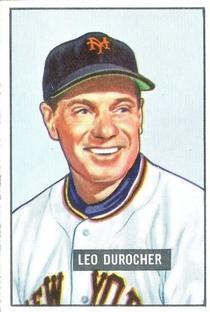 Leo Durocher managing the New York Giants made as much sense as department store mogul R.H. Macy shopping at Gimbel’s. Or so thought fans of the Brooklyn Dodgers.

From 1939 to 1946, Durocher helmed the squad from the Borough of Churches. Then the unthinkable happened. Beloved by Brooklynites for his fiery persona – which sometimes led to shouting matches with umpires – Durocher got suspended.

Commissioner Happy Chandler’s statement read, in part: “As a result of the accumulation of unpleasant incidents detrimental to baseball, Manager Durocher is hereby suspended from participating in professional baseball for the 1947 season.”1 These activities included a column in the Brooklyn Daily Eagle ghostwritten by Dodgers public-relations executive Harold Parrott under Durocher’s name.2

Durocher resumed his job in Brooklyn for 1948, but Dodgers general manager Branch Rickey nudged him toward the egress of Ebbets Field and in the direction of the Polo Grounds in July. Tension had been increasing between the reserved executive and the flamboyant manager; Durocher was ejected from a Giants-Dodgers game on July 4. In his autobiography Nice Guys Finish Last, Durocher said that Rickey dispatched Parrott to get him to resign. Steadfast was the skipper in his refusal.3

When New York Giants owner Horace Stoneham posited an inquiry about bringing Dodgers coach Burt Shotton, who had helmed Brooklyn to the National League pennant in Durocher’s absence in 1947, to replace Mel Ott as manager, Rickey expanded the pool to include Durocher. Stoneham switched his choice. Rickey let Durocher know about the Giants’ interest, refused to commit to keeping him through the season, and offered Stoneham’s phone number. Durocher, a combination of frustration and betrayal, responded, “I don’t know what the hell you expect to see out there! Where is that number?”4

New York Daily Mirror scribe Dan Parker, whose words thousands of baseball fans absorbed as they gulped their morning coffee, compared the longtime Brooklyn icon coming to Upper Manhattan as having “the chilling impact of a cold, wet towel swung by a weight-lifting barber.”5

Stoneham admitted, “Sentimentally, I don’t feel so good, but I believe it’s best for the club.”6

The Giants-Dodgers rivalry was palpable, so Durocher’s presence was unsettling to Giants fans deeply accustomed to bitterness against Brooklyn’s former manager. Reaction was mixed, but some embraced Durocher’s legendary fearlessness. “I personally don’t like him but you don’t win pennants with love,” said one fan.7

Durocher’s voyage inspired ire from a Dodgers rooter who said, “Without Leo, the Dodgers aren’t the Dodgers any more, as far as I’m concerned. Look me up at the Polo Grounds any time you want to find me.” A Giants fan abandoned her team loyalty, such was her venom toward the former Dodgers manager: “From today on, I am an ex-Giant fan.”8

Upon his arrival, Durocher praised his new underlings: “There are a lot of guys around here that like to play ball,” declared the veteran manager. “Those are the men who will make up this club – Sid Gordon, Bill Rigney, Jack Lohrke, and some of the others.”9

But expectations got tempered: “I am not undertaking to remake the ball club at this stage, in the sense that I contemplate wholesale changes through reductions and additions,” said Durocher. “Nor am I going to say we’ll go out from now on and win the pennant. But the clubs are getting bunched now, the clubs that have a chance, that is, and this is the time to move, if you are going to move.”10

The first game in a Giants uniform for “Leo the Lip” – so nicknamed because of his ferocious tirades that tried the patience of umpires – took place on July 17, resulted in a 6-5 victory over the Pittsburgh Pirates, and brought the “Jints” back to a .500 record (38-38-1). They hadn’t been at .500 since July 7.

Forbes Field’s hometown fans groaned as the visitors leapt to a 4-0 lead in the top of the first inning, which created an early yanking of Fritz Ostermueller; it was the lefty’s last year in the major leagues.11

Rigney led off for the Giants, arriving at first base thanks to Pirates shortstop Stan Rojek’s error; Whitey Lockman’s single got him to third base. Rigney scored and Lockman went to third on Gordon’s double. Johnny Mize, on his way to tying Pittsburgh’s Ralph Kiner for the major-league lead in home runs for the second season in a row, then crashed a three-run homer, his 20th of the season.

Ostermueller retired Walker Cooper on a putout to first baseman Max West for the first out. Then he gave up successive singles to Willard Marshall and Buddy Kerr before being pulled for right-hander Hal Gregg.

Lohrke drew a walk to load the bases, but Sheldon Jones hit a double-play grounder back to Gregg that finished the thumping. It was a rare 1-2-3 double play. A grounder to shortstop Rojek or second baseman and future Pirates manager Danny Murtaugh might have let a run score before the second out.

Jones, in the middle of a 16-8 season for the Giants, kept the Pirates’ half of the scoreboard in goose eggs for the first four innings. Murtaugh led off the bottom of the fifth with a double. After getting Clyde Kluttz out, Jones gave up a run-scoring single to pinch-hitter Dixie Walker. There was a Walker connection to the opposition’s manager – he played for Durocher from 1939 to 1946.

Pirates manager Billy Meyer sent another right-hander, Elmer Singleton, to the mound for the top of the sixth. He kept the visitors from mounting a comeback in the sixth and seventh innings.

Pittsburgh scored its second run in the bottom of the sixth; Johnny Hopp began with a double. After Kiner grounded to shortstop Buddy Kerr, Wally Westlake singled home Hopp, cutting the deficit to two runs. West’s grounder to Jones attained the second out, but moved Westlake to second. Cheers turned to boos when home-plate umpire Babe Pinelli tossed Kluttz for arguing a called third strike.

With the score still 4-2 going into the bottom of the seventh, Pittsburgh responded with three runs to take the lead. After Jones gave up singles to Rojek and Hopp, Durocher called on righty Ken Trinkle to buttress the defense. Trinkle was a thoroughbred for New York, leading the major leagues in game appearances during the previous two seasons.

Kiner overpowered the reliever with a three-run bash, his 25th homer of the season, to make the score 5-4. It was a welcome but not unfamiliar sight to Pirates fans – Kiner led the major leagues in home runs every season from 1947 through 1952.12

The Giants overtook the home team with two runs in the top of the eighth. Kirby Higbe, another Durocher acolyte in Brooklyn – 1941-1943 and 1946 – subbed for Singleton on the Forbes Field pitching mound.13 Cooper walked; Les Layton substituted as a pinch-runner. Marshall followed with another walk to put runners on first and second.

Higbe retired the next two batters. Kerr flied out to Westlake in right field; Johnny McCarthy, pinch-hitting for Lohrke, grounded to Frankie Gustine at the hot corner and advanced the runners one base.

Chaos began because the Pirates believed that Layton “ran several feet out of (the) line” to evade Gustine. This violation of the rules was an automatic out that would have ignited an inning-ending double play upon Gustine firing to Ed Stevens, who had replaced Max West at first base when the inning began.14

But third-base umpire Artie Gore refused to call Layton out, even though Pittsburgh’s bench emptied to lobby their case. Bobby Thomson, the future Giants hero of the 1951 three-game playoff against the Dodgers, pinch-hit for Trinkle and knocked in the pair of runners for a 6-5 score.

The one-run cushion proved to be enough. Durocher counted on Alex Konikowski to hold the Pirates to their five-run count.

In 1951, Durocher guided Willie Mays through a slump that began his gold-standard, major-league career. He also brought a pennant to Upper Manhattan that season in a legendary race with the Dodgers. Down 13½ games in mid-August, the Giants clawed their way to a tie, forcing a playoff. Thomson’s famed three-run homer in the ninth inning of Game Three – the “Shot Heard ‘Round The World” – won the NL flag, the second of Durocher’s managing career after the 1941 Dodgers.15 The Giants lost to the Yankees in the ’51 World Series in six games.16

Under Durocher’s leadership, the Giants again found their groove in 1954, when they notched an NL pennant, squared off against the Cleveland Indians in the World Series, and swept them 4-0 to win the championship.

Stepping back from managing after the 1955 season, Durocher later became a coach for the Dodgers in Los Angeles. He skippered the Cubs from 1966 to 1971 and was booted in 1972 after 90 games. The Astros lured him to southeast Texas – Durocher was the third of three managers for Houston in ’72, going 16-15. The following season, the team went 82-80. That was his last year managing in the major leagues.

In addition to the sources cited in the Notes, the author consulted Baseball-Reference.com and Retrosheet.org for pertinent information, including box scores and play-by-play.

15 The Yankees beat the Dodgers in five games in the 1941 World Series.

16 The Giants’ performance in the 1951 playoff has been the subject of scholarship uncovering cheating. They manned a spyglass in the center field offices of the Polo Grounds to discern the signals given by the opposing catcher. But Thomson long denied that he knew what Ralph Branca, the Dodger right-hander who allowed the home run, was going to throw. Joshua Prager’s comprehensive 2006 book The Echoing Green, based on his 2001 Wall Street Journal article, goes into great detail about the controversy. Joshua Prager, “Was the ’51 Giants Comeback a Miracle, Or Did They Simply Steal the Pennant?,” Wall Street Journal, January 31, 2001, https://www.wsj.com/articles/SB980896446829227925 (last accessed May 8, 2022); Joshua Prager, The Echoing Green: The Untold Story of Bobby Thomson, Ralph Branca, and the Shot Heard Round the World (New York: Pantheon, 2006).