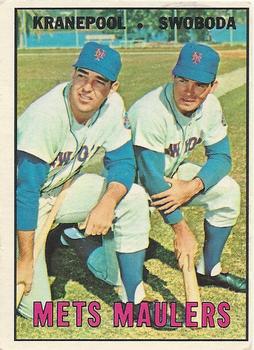 Baseball card #186 in the 1967 Topps set seems in retrospect like a victory of hope over reality. The card shows New York Mets teammates Ed Kranepool and Ron Swoboda, hitters known more for their power potential than their actual production, kneeling with bats in a spring-training setting above the headline “METS MAULERS.”

First baseman Kranepool and right fielder Swoboda combined for the less-than-Ruthian total of 23 home runs in 1967 – 10 by Kranepool and 13 by Swoboda. For context, 12 National League batters hit at least 23 homers all by themselves that year, and the league’s sluggingest teammates – Hank Aaron and Clete Boyer of Atlanta – combined for 65.1 Topps’ anointed “Mets Maulers” weren’t even the two biggest power threats on their own team. Left fielder Tommy Davis led the Mets with 16 dingers and second baseman Jerry Buchek added 14.

Still, just as a stopped clock is right twice a day, the Mets Maulers card was right once a year. That time came in the second game of a doubleheader at Shea Stadium on July 19, 1967, when Kranepool and Swoboda homered in the same game for the only time that season. In addition to making the card designers at Topps look like geniuses, the Maulers’ power outburst supported the ninth major-league win for heralded rookie pitcher Tom Seaver.

The doubleheader pitted the National League’s two worst teams against each other. Manager Wes Westrum’s Mets brought a 35-51 record into the game, while their 1962 expansion brethren, Grady Hatton’s Astros, stood at 36-53. The Mets trailed league-leading St. Louis by 14½ games, with Houston just a half-game behind them.

Westrum’s team came into the doubleheader on something of a tear. Since the start of July, they’d won two out of three games in series against the Cardinals, Giants, Braves, and Cardinals again, and then won the first of a four-game set against Houston. Only a 1-and-3 road trip to Cincinnati blotted their successful month. Houston had also played well in July, bringing a 9-6 record into the doubleheader, highlighted by a four-game sweep of the Cubs July 6-9.

The Mets won the first game of the doubleheader 8-4 before 42,209 fans.2 Swoboda hit a two-run homer off Barry Latman, Kranepool doubled in two runs, and Jack Fisher scattered seven hits in a complete game.

Right-hander Dave Giusti3 started for Houston in the nightcap, bringing a 6-8 record and 3.69 ERA into the game. He’d made two starts against the Mets earlier in the year, including a four-hit complete game in a 6-1 Houston win on May 31.

Opposing him was Seaver, the 22-year-old wonder kid, just eight days removed from earning a save for the National League in his first All-Star Game, at Anaheim Stadium. Making his 19th big-league start, Seaver boasted an 8-6 record and a 2.83 ERA. He had faced Houston twice, scattering nine hits in a 3-2 complete-game win on May 5 and taking a 4-1 complete-game loss on June 1.

The Astros jumped on Seaver right out of the gate. Second baseman Joe Morgan began the game with a single. Shortstop Sonny Jackson forced Morgan at second with a grounder, then stole second. After an infield pop by center fielder Jim Wynn, left fielder and future Mets hero Rusty Staub drove in Jackson with a double to center field, taking third on an errant throw by Mets center fielder Larry Stahl. Third baseman Eddie Mathews doubled to right to score Staub, making the score 2-0. In a sign of things to come, Seaver whiffed left fielder Norm Miller for the third out.

The Mets rebounded just as quickly in their half of the first. Shortstop Bud Harrelson singled and Stahl reached when Astros first baseman Jackie Brandt bobbled his grounder. Morgan, a future five-time Gold Glover, misplayed a bunt by third baseman Ed Charles to load the bases. Cleanup hitter Davis followed with a grand slam into the left-field bullpen for a 4-2 Mets lead.4 Kranepool singled to bring the Mets’ on-base streak to five straight hitters, but Giusti retired Buchek, Swoboda, and catcher John Sullivan to end the rally.

Seaver struck out catcher Dave Adlesh and Giusti in the second, Wynn and Staub in the third, and Adlesh again in the fourth. In fact, he struck out at least one batter in every inning except the fifth. After surrendering three hits in the first inning, he gave up only four over the remaining eight innings – a single by Morgan in the third, a double by Jackson in the fifth, a double by Brandt in the seventh, and a single by Staub in the eighth. Seaver also walked only one batter, Miller, in the fourth. None of these runners advanced beyond their original base.

The Mets, meanwhile, continued to score. Swoboda led off the fourth with a double to left field, and a grounder by Sullivan advanced him to third. Seaver, hitting .220 coming into the game, drove him in with a fly ball to Wynn in center. The run represented the fourth of Seaver’s 86 career RBIs.

The Mets Maulers fulfilled their cardboard destiny in the sixth. Kranepool led off the inning with a home run to right field, his eighth of the season. One out later, Swoboda cranked his seventh homer of 1967 to left field, making the score 7-2 and thrilling Mets fans and Topps employees everywhere.5 Lefty reliever Dan Schneider replaced Giusti and retired the next two hitters to end the inning. Lanky right-hander Carroll Sembera mopped up the final two frames for Houston, allowing one hit and no runs while striking out three.

Houston’s Miller reached base to start the ninth inning on an error by shortstop Harrelson, another future Gold Glove winner. Harrelson redeemed himself by starting a 6-4-3 double play on a grounder by the next hitter, Brandt. Seaver closed out the game by whiffing the hapless Adlesh, who had a “perfect” day at the plate – four at-bats, four strikeouts.6 The game lasted 2 hours and 18 minutes.

The game set records for players on both teams. Seaver finished with 12 strikeouts over nine innings, tying a Mets team record established by his former Fresno, California, high-school teammate Dick Selma in 1965.7 Staub’s two hits gave him an 18-game hitting streak, breaking his previous team record of 17.8 He ran the streak to 20 games before going hitless on July 21.9 The New York Daily News also pointed out that the back-to-back complete games by Fisher and Seaver were the Mets’ first consecutive complete games since July 31, 1964, when Fisher and Frank Lary turned the trick against the Astros.10

The Mets ended the day with a 2½-game lead over Houston, just a half-game behind the eighth-place Los Angeles Dodgers. It didn’t last. The New Yorkers slumped the rest of the season and finished last with a 61-101 record, 40½ games behind first-place St. Louis. Houston closed in seventh place at 69-93, 32½ games back. Westrum lost his job with 11 games left in the season, while the Astros fired Hatton in June 1968.

Seaver won the National League Rookie of the Year Award, finishing with a 16-13 record, a 2.76 ERA, and 170 strikeouts in 251 innings. Kranepool and Swoboda, the Mets Maulers, didn’t go on to rewrite the home-run record book. But both men gained lasting fame in New York for their contributions to the 1969 “Miracle Mets” World Series victory – a triumph that included a home run by Kranepool in Game Three.

In addition to the sources cited in the Notes, the author used the Baseball-Reference.com and Retrosheet.org websites for general player, team and season data and the box scores for this game, as well as the 2020 Houston Astros media guide.

Image of 1967 Topps card #186 downloaded from the Trading Card Database.

1 Aaron hit 39 to lead the league, while Boyer hit 26, tied for seventh-best.

2 The official paid attendance, listed in Retrosheet, was 22,229. News outlets including the New York Times and the New York Daily News noted that it was Junior-Senior Citizen Day, with older fans and children getting into the park free. The 42,209 attendance count is taken from Joe Durso, “Mets Overpower Astros Here, 8-4 and 7-2,” New York Times, July 20, 1967: S45.

3 Although he did not contribute to it in this game, Giusti set an unusual team record in 1967 by hitting three home runs. As of the end of the 2020 season, that remained the Houston record for most single-season homers by a pitcher. Giusti went deep against San Francisco on June 13, Philadelphia on August 6, and Chicago on August 28.

6 In a career spanning parts of six seasons, Adlesh struck out 80 times in 256 at-bats, or almost once every three at-bats.

9 Staub’s streak has since been topped numerous times. As of the end of the 2020 season, Willy Taveras held the Astros’ team record with a 30-game hit streak in 2006. Jason Catania, Sarah Langs, and Andrew Simon, “Each Team’s Longest Hitting Streak,” MLB.com, December 18, 2020.