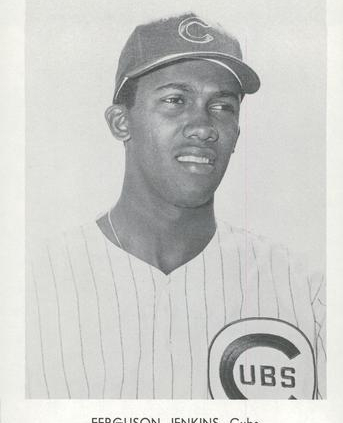 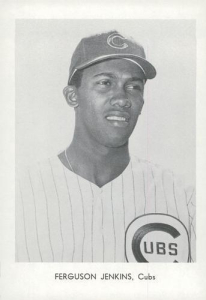 “He just pitched beautiful,” raved Chicago skipper Leo Durocher about Fergie Jenkins, whose complete-game victory captured the series finale against the Cincinnati Reds (43-35) and solidified an 11-1 homestand for the Cubs.1

Entering the game, the Cubs had won 16 of their previous 18 contests, including their last five. Cellar-dwellers in 1966, Durocher’s first season in the Chicago dugout, the North Siders (45-29) had inched up in the National League standings from fifth place on June 19 and were just a half-game behind the first-place St. Louis Cardinals.

As for skipper Dave Bristol and his Cincinnati Reds, the opposite trend was taking form. Despite holding the NL’s first-place spot from April 23 to June 18, the Reds had fallen to third place after winning only three games of their last 12 going into the third game of their series with the Cubs.

On the mound for the Cubs was right-hander Jenkins, the 23-year-old All-Star from Canada. He started his career in 1965 with the Philadelphia Phillies, appearing in just eight games before being traded to the Cubs on April 21, 1966. For a club whose pitching staff posted the majors’ highest ERA (4.33) in baseball in ’66, Jenkins was a silver-lining acquisition. He started the year in the bullpen but earned a spot in the Cubs’ rotation in late August. In his 12 total starts that season, Jenkins compiled a 2.74 ERA with a 4-3 record, rising to the top of Chicago’s staff.

As a result, he was named the 1967 Opening Day starter for the Cubs, and he tossed a six-hit, complete-game victory against the Phillies. Heading into the matchup against the Reds, Jenkins held a 2.84 ERA and sat at third among the league leaders in wins (10) and complete games (9).2

Toeing the rubber for Cincinnati was 26-year-old right-hander Sammy Ellis, who burst on the scene in 1965 by winning 22 games in his first season as a starter. He entered the game with a 5-4 record but had been hit hard (6.08 ERA) since his last victory, a complete game on May 24 at Wrigley Field.

Despite impending rain,3 fans gathered outside Wrigley Field as early as 8:30 A.M. for the 1:15 P.M. Sunday matinee on Family Day. Tickets sold out, including standing-room-only admission, within a half-hour of game time.4 A turnaway crowd of 40,4645 began its interminable roar “from the instant Jenkins raised his gifted right arm to fire the first pitch,” Bill Ford of the Cincinnati Enquirer lionized.6

Jenkins came out smoking, retiring the side in order in the first. The Cubs encountered a similar fate against Ellis, who worked around a one-out walk to Glenn Beckert. Jenkins continued his early dominance in the second as All-Star Tony Pérez, who hovered around the top of the league in slugging (.552) and home runs (16), went down on strikes to lead off the inning. Jenkins then made quick work of Deron Johnson and Don Pavletich to strike out the side.

Leading off for the Cubs in the second was Lee Thomas, who had struggled through June, hitting just .206 in his last 34 at-bats. Thomas had sat out Friday’s game, then finally found a groove on Saturday, recording two singles and scoring a run in the Cubs’ 6-3 win. His Sunday started in a similar fashion as he collected a base hit to right field. After advancing on a groundout by Al Spangler, Thomas scored on a double to left by the red-hot Randy Hundley, who was sporting a .375 batting average with three extra-base hits in his last five games. A groundout from Ted Savage, followed by a strikeout by Jenkins, ended the inning with a 1-0 Cubs’ lead. A quiet third kept the game moving, with both pitchers allowing only contact for outs.

Jenkins’s uninterrupted dealing finally came to a halt in the fourth when Vada Pinson, who entered the game with the third-most hits in baseball (89), tied the game with his sixth home run of the year, a solo shot to deep right field. Art Shamsky followed with a single, but Jenkins quickly regrouped, using his defensive skills in a 1-6-3 double play to get Pete Rose and clear the bases. The inning wrapped with a groundout by Perez to end any further Cincinnati threat.

“The irrepressible Cubs didn’t wait long to settle the issue,” commented Si Burick of the Dayton Daily News.7 Ron Santo began a flurry of singles; Thomas and Spangler did likewise, enabling Santo to eventually score the go-ahead run. A wild pitch from Ellis allowed Thomas to cross home for a 3-1 lead. Spangler was caught stealing third and Hundley struck out, but a walk to Savage brought the headliner Jenkins to the plate with two outs and a runner on first.

With a multisport skillset, including appearances with the Harlem Globetrotters, the 6-foot-5 athletic virtuoso could do more than just pitch. He entered Sunday with five hits so far in the season, including a double, and four RBIs. Jenkins helped himself by ripping a ball into center field, bringing Savage home and landing himself at third base with a triple.

With that, Ellis’s day was done. Bristol called on right-hander Bob Lee who, despite struggling with the Dodgers to start the season, had begun to recover his old All-Star form, lowering his ERA from 9.00 to 3.64, after being purchased by Cincinnati in late May. Lee got Paul Popovich on a fly out to end the inning, but “as far as the Reds were concerned,” Earl Lawson of the Cincinnati Post & Times-Star quipped, “the game was over.”8

“Jenkins took less than three minutes” to shut down the Reds in the fifth, according to Burick.9 Lee answered with a one-two-three inning of his own as the Cubs went back to the dugout cleanly for just the second time in the game.

The sixth inning saw another pitching change for Cincinnati, bringing in the journeyman southpaw Gerry Arrigo, who retired the Cubs in order. Jenkins returned the favor, getting the heart of the Reds lineup in Shamsky, Rose, and Perez, without any traffic.

The first baserunner in three innings came in the bottom of the seventh, as Jenkins recorded Chicago’s final hit of the game and his second extra-base hit, this time a one-out double. He advanced to third on a groundout by Popovich, and a walk to Beckert put runners at the corners. A fly ball to center field by Billy Williams, however, helped Arrigo escape the rising commotion.

In the eighth, Lee May collected a two-out single, the Reds’ first baserunner since the fourth and the third and final hit allowed by Jenkins in the game. A grounder to short by Tommy Helms ended the inning. Three consecutive groundouts from the home bats sent the game to the ninth.

In search of his 10th complete game of the season, Jenkins took the mound in the ninth. He made quick work of Floyd Robinson, who, while pinch-hitting for Arrigo, fouled out to first baseman Thomas. A 4-3 grounder by Pinson followed. After working the count full, Shamsky sent a ball floating to right field, where Spangler was ready and waiting to corral the final out of the swift 2-hour 7-minute game.

A split doubleheader between the Mets and Cardinals, combined with the Cubs’ win, awarded Chicago the first spot in the NL this late in the season for the first time since 1945, albeit as a tie with the Redbirds. Chants of “We’re No. 1” filled every inch of the Confines, cementing “one of the wildest celebrations in Wrigley Field history,” according to Earl Lawson of the Cincinnati Post and Times-Star.10

As the players stormed the mound in their delirium to celebrate with the leading man, Jenkins, the fans continued their mayhem, making no moves toward the ballpark exits. Along with the big offensive inning and errorless defense from the Cubs, Fergie Jenkins inked another arresting performance, continuing his emergence as one of baseball’s best starters. Facing just 29 batters along the way, the ace recorded his 11th win of the season. His seven strikeouts recorded on Sunday brought his season total to 109, the sixth-most in baseball.

While some, including Bill Ford of the Cincinnati Enquirer, believed that “the National League race [was] over” once the Cubs found first place, they would finish third in the NL behind the Cardinals (101-60) and the Giants (91-71), winning just 29 of their final 60 games.

This article was fact-checked by Bill Panageas and copy-edited by Len Levin.

In addition to the Sources cited in the Notes, the authors consulted the Baseball-Reference.com and Retrosheet.org websites for pertinent material and the box scores noted below.