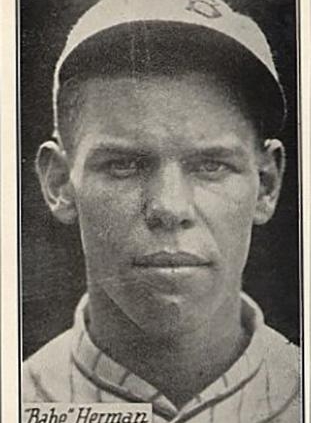 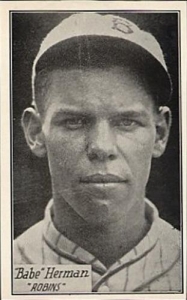 On July 6, 1931, the Brooklyn Robins1 began an extended road trip, playing 32 of their next 36 games away from Ebbets Field.2 After stops in Philadelphia, Boston, St. Louis, and Chicago, the second-place Robins traveled to Pittsburgh. The Pirates, in sixth place in the National League, had been home since July 4, and except for four games (all against Cincinnati) scattered in their schedule, played 32 of 36 games at Forbes Field.3 The Pirates and Robins played the fourth game of a six-game series on July 24.

The Friday afternoon contest was played in front of approximately 2,000 spectators. In addition to witnessing a combined offensive outburst of 15 runs and 34 hits, the fans got to see Brooklyn’s Babe Herman hit for the cycle. The two teams’ pitching staffs combined to face 84 batters, but somehow, the game took only 1 hour and 54 minutes to play.

Right-hander Heinie Meine got the start for Pittsburgh. He was a workhorse for the Bucs, and he ended the 1931 season leading the National League in games started (35), innings pitched (284), and batters faced (1,202). He was making his third start against Brooklyn, having split two previous decisions. Opposing Meine for the Robins was southpaw Watty Clark. This was Clark’s third start against Pittsburgh; he had won the previous two, allowing only two runs in 19 innings (both complete-game victories).

Meine retired the first two batters he faced in the top of the first inning. His chance for a no-hitter/shutout ended when Herman blasted his 12th home of the season run well beyond the right-field barrier. Lefty O’Doul followed with a double, but Meine escaped further damage by getting Del Bissonette to pop out.

The Pirates scored in the bottom half. Lloyd Waner led off with a single and advanced to second on George Grantham’s sacrifice bunt. When Adam Comorosky singled up the middle, Waner trotted across home plate and Pittsburgh had manufactured a game-tying run.

In what seemed to be a sign of things to come for Brooklyn, the Robins put four runners on base in the second but did not score. The first baserunner was Wally Gilbert, who doubled but was picked off and thrown out trying to steal third base. Gordon Slade then doubled to deep left and moved to third on Al Lopez’s single to center. Clark walked to load the bases, but the rally died when Johnny Frederick grounded to second baseman Howdy Groskloss, who started an inning-ending double play.

Pittsburgh’s Eddie Phillips began the bottom of the second by homering to deep left, his sixth round-tripper of the year. Two outs later, Lloyd Waner stroked a double to left. Grantham doubled Waner home and later scored on Comorosky’s single and second RBI in two innings. The Pirates now led the Robins, 4-1.

Neal Finn and Herman each grounded out in the third. O’Doul singled, Bissonette walked, and Gilbert singled, plating O’Doul. An inning later, Brooklyn added two more singles to their hit total, but again, a double play (this time started by first baseman Grantham) took away any hopes of a rally.

Pittsburgh was “seized with a swatting fit”4 in the bottom of the fourth. Tommy Thevenow started the offensive outburst with a double to left. Meine laid down a sacrifice bunt. Brooklyn backstop Lopez grabbed the ball and threw to third, but it was too late, and the Pirates had runners at the corners with no outs. Lloyd Waner drove in Thevenow with a single. Grantham sacrificed, putting both Meine and Waner into scoring position. Comorosky was intentionally walked. Pie Traynor cleared the bases with a triple, putting the Pirates up 8-2.

Undeterred, Brooklyn kept swinging the bats. In the fifth, Herman doubled and O’Doul singled. Bissonette stroked an RBI single to right, bringing Herman home. Even with his team still holding a five-run advantage, Pittsburgh skipper Jewel Ens wasted no time making a pitching change. Bob Osborn was called from the bullpen to relieve Meine. Osborn, a right-hander, entered the game with a 4-0 record but a 5.60 earned-run average. In his four-plus innings of work, Meine had yielded 12 base hits and two walks. Osborn struck out Gilbert and induced Slade to ground a ball to third baseman Traynor, who stepped on the bag and fired across the diamond in time for a double play. Rally over.

Clark seemed to settle down, retiring nine of 10 batters he faced over the next three innings. Osborn was equal to the task. He retired the Robins in order in the sixth, and with one out in the seventh, he gave up a single to Herman. O’Doul followed with a single, his fourth hit of the game. Then, in an instant, Bissonette grounded into a double play and Brooklyn was retired; the Pirates had once again prevented any runs from scoring. In the top of the eighth, three singles (by Slade, Lopez, and Frederick), a groundout, and a fielding error finally resulted in a run for the visitors, but they still trailed, 8-4.

Rube Bressler had pinch-hit for Clark in the top of the eighth, so Cy Moore came on to pitch for Brooklyn. He allowed a one-out double to Osborn but stranded him at second, as both Woody Jensen and Grantham flied out.

Through eight innings, Brooklyn had 17 hits but only four runs to show for them. They weren’t ready to give up in the ninth. Herman led off with a triple to right-center. The three-bagger meant that Herman had hit for the cycle. O’Doul singled to center, and Herman scored. Bissonette walked, and Gilbert singled to load the bases. Osborn then hit Slade with a pitch, forcing in the second run of the inning.

That was all for Osborn. Right-hander Glenn Spencer replaced Osborn on the mound. The 5-foot-11, 155-pound Spencer faced only one batter, Al Lopez, who singled into the hole at shortstop. Bissonette scored on the play. Thevenow probably saved the tying run from scoring by keeping the ball in the infield, but Pittsburgh’s lead was down to 8-7.

With the bases still loaded and no outs (the first six Brooklyn batters of the inning had reached), Ens called for Larry French to relieve Spencer. French was a starter for Pittsburgh, with only four of his 23 appearances coming in relief. Two days earlier, he had pitched a complete game against the Robins, winning a 10-6 decision.

The first batter French faced was pinch-hitter Ernie Lombardi, a rookie who carried a .289 batting average in the first season of what turned out to be a 17-year Hall of Fame career. Lombardi popped to short for the first out. Frederick then lined out to Groskloss, who made the catch and then threw the ball to shortstop Thevenow at second base, wiping out Slade and sending the Robins “back to their hostelry with their heads down.”5 The Pirates had won, aided defensively by five double plays, three with the bases loaded. Despite this, the Robins had still left a dozen runners on base.

Brooklyn had collected 21 hits, six for extra bases, and lost. Pat Robinson, writing for the New York Daily News, told his readers that despite outhitting their opponents in recent games, the Robins didn’t end up in the win column. “Our jolly crew has now made 38 hits in two days with two defeats as the net result.”6

With his 4-for-5 performance, Herman had hit safely in five straight games, and in nine of his last 10. His batting average climbed to .312, and his slugging percentage rose 20 points to .525. O’Doul’s five base hits raised his average to .343, a season high. Lopez also had four hits, all singles.

Herman’s feats in 1931 marked just the third and fourth times that a Brooklyn franchise batter had hit for the cycle, joining Tom “Oyster” Burns (August 1, 1890, against the Pittsburgh Alleghenys) and Jimmy Johnston (May 25, 1922, against the Philadelphia Phillies).

The Robins went on to lose the next two games to the Pirates (both ends of a doubleheader), meaning they had lost five of the six games in the series. Brooklyn’s misfortunes continued, as they dropped eight of 11 decisions since coming to Pittsburgh, falling to fourth place in the standings.

Thank you to Games Project Chair John Fredland for information on the Sunday blue laws, which forced teams to play Sunday games outside of their own state. (See Note 3.)

1 Wilbert Robinson managed the Brooklyn Base Ball Club from 1914 through 1931. During that time, the team was known as the Brooklyn Robins. When Robinson retired and Max Carey took over the managerial duties in 1932, the club became the Brooklyn Dodgers.

3 From July 4 through August 8 (a span of 36 games), the Pirates won 22 games in the homestand. There was one tie (the second game of a July 12 doubleheader against the Chicago Cubs). Brooklyn’s four games at home and Pittsburgh’s four games on the road were all products of Sunday blue laws (also known as Sunday Closing Laws) in Pennsylvania and Massachusetts. Brooklyn played at Boston and Philadelphia and then returned home for Sunday games; the Pirates frequently played Sunday-only series in Cincinnati. According to the Library of Congress website  (see https://blogs.loc.gov/law/2018/08/baseball-blues-sunday-games-and-the-law/), the practice started in the early 1900s and ended in 1933.