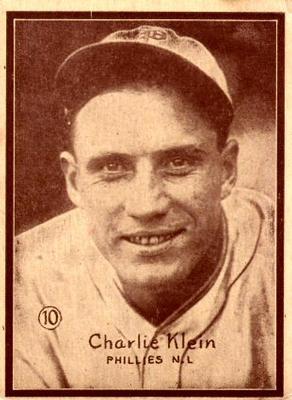 The month of June 1931 came to a close with the Philadelphia Phillies and the Chicago Cubs battling each other at the Baker Bowl. Chicago (36-29-1) held third place in the National League standings, seven games ahead of sixth-place Philadelphia (29-36-1). The teams had split the first two games of a four-game series, and on July 1 they played before an estimated crowd of just 2,000 spectators. Those fans were in for a rare treat. A doubly rare treat. For the first time ever in major-league play, a batter hit for the cycle and a team hit into a triple play in the same game.

It was a hot day, reportedly more than 100 degrees on the field.1 Left-hander Jumbo Elliott started on the hill for the Phillies. He had joined the Phillies’ pitching staff in the offseason, acquired in a trade from the Brooklyn Robins.2 In search of his 10th win of the season, Elliott had struggled in his previous start, getting the hook after only four innings of work (he had allowed seven earned runs on 13 hits). Fellow southpaw Les Sweetland started for the Cubs. After four seasons with the Phillies, Sweetland was purchased by Chicago the day before Elliott came to Philly. Sweetland had been a starter for much of the early part of the 1931 season, but his last three appearances had been as a reliever.

With one out in the top of the first, the Cubs’ Woody English drew a walk. Danny Taylor doubled to right, putting two runners in scoring position. Hack Wilson’s fly ball brought English home for a quick Cubs lead.

The Phillies “accumulated their [own] cluster”3 of runs in the bottom of the first. Fred Brickell led off with a walk. Dick Bartell singled to center, and then Chuck Klein scorched a triple into right field for two runs. Klein scored on a groundout by Pinky Whitney, and Philadelphia had now taken the lead, 3-1.

The Cubs eliminated the Philadelphia advantage, as “they crossed the plate once each”4 in the second and third innings. In the second, Gabby Hartnett doubled into right field, advanced to third on a bunt single by Billy Jurges and scored on a Kiki Cuyler single. An inning later, Wilson led off with a home run well beyond the barrier in right, and the score was 3-3. The Phillies had baserunners in both innings but did not capitalize.

Cuyler led off the top of the fourth with a single to left field. English walked, and Taylor settled into the batter’s box. Suddenly the Cubs had a potential rally with no outs and “three of the fastest men on the Wrigley payroll” on base.5 But the threat was over in the swing of a bat. Taylor “hit a low liner over second and both men were off like shots.”6 Second baseman Les Mallon caught the liner and threw to Bernie Friberg at first base, doubling English off. According to the Philadelphia Inquirer, Friberg then “whipped the apple to [shortstop] Bartell and Cuyler was caught three feet from the bag to complete the triple killing.”7 It was the first triple play turned in the 1931 season, and the scored remained tied. Rare Event Number One. It also seemed to take the air out of the Chicago offense, as the Cubs managed only three singles through the next four innings.

In the home half of the fourth, Mallon was issued a free pass with one out. With Elliott batting, Sweetland appeared to have Mallon picked off first, but he threw the ball away, and Mallon took second, allowing him to score on Elliott’s ensuing RBI single to right. In the bottom of the fifth, Klein, who had grounded out to the pitcher in his second at-bat, now led off with a single. He advanced to second on Buzz Arlett’s grounder to the right side. Whitney stroked a double, plating Klein, and Philadelphia led by two runs, 5-3.

The Phillies sent nine batters to the plate in the sixth and broke the game open. After Mallon grounded out to short, Elliott, Brickell, and Bartell each singled to load the bases for Klein. His double to right brought two more runs home and caused Chicago manager Rogers Hornsby to make a pitching change. Ed Baecht relieved Sweetland and immediately issued an intentional walk to Arlett. Baecht had started the first contest of this series but had lasted only one-third of an inning, after allowing five runs to start that game. Now, with the bases once again loaded, Whitney popped out, but Spud Davis walked, driving in Philadelphia’s eighth run of the game.

Mallon singled to start the Phillies’ seventh and Philadelphia played small ball. Mallon moved around to score after a sacrifice bunt, a groundout, and a single by Bartell. With Klein batting, Bartell was caught trying to swipe second base, but that was the end for Baecht.

Sheriff Blake came on to pitch the bottom of the eighth for Chicago. Klein greeted the new hurler with a home run to deep right. That meant that the Philadelphia left fielder had hit for the cycle. Rare Event Number Two. Fred Koster struck out and then Blake had trouble finding the strike zone, as he walked three of the next four hitters he faced (he also gave up a single), and Philly had taken a commanding 11-3 lead. Elliott bounced into a pitcher-to-catcher-to-first-baseman double play, or the lead might have grown further.

Despite allowing three runs in the opening frame, Elliott had settled down to “hurl airtight ball until the ninth.”8 Cuyler walked and advanced to second on a sacrifice by English. Taylor walked, and Wilson singled home Cuyler. Les Bell followed with a single, plating Taylor and sending Wilson to third. Hartnett lifted a fly ball into right field. Right fielder Arlett caught the ball in foul territory, but Wilson smartly tagged and scored Chicago’s third run of the inning. Phil Collins was summoned from the bullpen to close the game. He retired Jurges on a fly out to center, and the Phillies had indeed won, 11-6. Elliott improved his record to 10-7. He and his teammates had pounded out 14 hits and drawn eight walks. (They left 10 runners on base.)

Klein’s 4-for-5 performance caused his batting average to increase to .375, giving him the lead in the National League. His slugging percentage rose 25 points to a season-high .723,9 and his 21 home runs also topped the senior circuit. Klein’s home run was his 100th hit of the season.10

In addition, Klein was just the fourth player in Phillies franchise history to hit for the cycle, joining Lave Cross (April 24, 1894, against the Brooklyn Bridegrooms), Sam Thompson (August 17, 1894, against the Louisville Colonels), and Cy Williams (August 5, 1927, against the Pirates).

A rare event in major-league baseball can be described as an event that occurs in less than 1 percent of all games played.12 Over the past 20 years, I have studied the occurrence of rare events in baseball, including hitting for the cycle, turning a triple play, and pitching a no-hit game. To discover that two of these types of events actually occurred in the same game, by the same team, has been a special discovery.

2 On October 14, 1930, Elliott was traded by Brooklyn with Clise Dudley, Hal Lee, and cash to Philadelphia, in exchange for Lefty O’Doul and Fresco Thompson.

9 Through the first six games of the 1931 season, Klein’s slugging percentage ranged from .846 to 1.889, as he collected six extra-base hits and 19 total bases. The .723 mark was his highest point after the first week of the season.

11 See retrosheet.org/TriplePlays.htm for a complete list of all triple plays in the major leagues since 1871, the start of the National Association. See en.wikipedia.org/wiki/List_of_Major_League_Baseball_players_to_hit_for_the_cycle for a complete list of batters who have hit for the cycle in the major leagues since 1882, when the first cycle occurred.