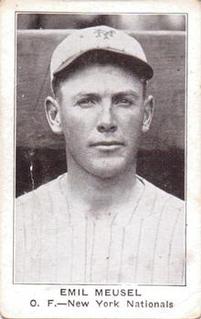 Trailing the Pittsburgh Pirates in the National League standings in July 1921, the New York Giants bolstered their lineup by trading for star outfielder Irish Meusel. In his second game after the controversial deal, Meusel sparked New York to an early lead over the Pirates, but the Giants also needed Phil Douglas’s shutdown relief pitching and Frankie Frisch’s clutch ninth-inning double to rally for a 6-4 win on July 28 and move within a game of first place.

Emil Frederick Meusel joined the Philadelphia Phillies in 1918 and reached the NL’s top 10 in batting average and slugging percentage in 1919 and 1920. “Meusel is one of the natural hitters of baseball,” The Sporting News observed.1 He appeared on a similar course in 1921, with a .353 batting average through July 22 and 12 home runs — second in the NL behind George Kelly’s 14 homers for the Giants.

But the Phillies were adrift, headed for their third consecutive last-place finish. On July 24, wire services reported that Philadelphia had benched Meusel.2 An unsourced statement alleged that his “hitting and playing has fallen off of late and the management maintains his attitude has lessened the morale of the entire club.”3

The next day’s coverage named names. “Meusel’s playing days are over,” Phillies President William A. Baker asserted.4 “We are out to trade him for the best prospect we can find. I have already offered him to the Giants, the Pirates, and the Boston Braves. Whoever offers the most in exchange will grab this man.”5

In June 1920 the Giants had sent two players and $100,000 to Philadelphia for Dave Bancroft, also accused of loafing by Phils management but soon to emerge as the NL’s top shortstop.6 So far in 1921, a five-player cast had manned center field for the Giants, without any of them locking down the position, and New York pounced on the chance at an upgrade.7 On July 25, the day after Baker’s statements hit the newspapers and hours after a 6-3 loss to Pittsburgh in the opener of their four-game series at Forbes Field dropped the Giants four games back, they traded two players — and more cash — for the 27-year-old Meusel.8

The Phillies’ move — and rumored collusion with the Giants — drew harsh reactions. “Mr. Baker traded this great hitter and capable outfielder to the New York Giants for a rookie bench warmer and a catcher who isn’t even in the major leagues,” The Sporting News observed.9 “The Philadelphia Club … seems to have a secret working agreement with the Giants,” the Brooklyn Daily Eagle protested.10 “[I]t was like a man turning over a valuable diamond ring and receiving a signet ring in exchange.”11

Baker, the Phillies’ president, dismissed allegations of improper dealing. “The Pittsburgh club was given the same opportunity to bargain for Meusel’s services as New York [and their offer] I considered a joke,” he said.12 “I am not in favor of New York, Pittsburgh, or Boston and do not care a rap which club wins the pennant.”13

Meusel arrived after New York rallied to win the series’ second game in 10 innings. Installed in left field a day later, with George Burns moving to center, he debuted in New York’s 4-1 win.14 The Giants were now only two games behind.

After New York’s 10-inning win on July 26, manager John McGraw protested a call by umpire Bill Klem so vigorously that NL President John Heydler suspended him indefinitely.15 McGraw traveled to Chicago, where Heydler was attending the Black Sox trial, to plead his case, leaving Giants coach — and fellow future Hall of Famer — Hughie Jennings in charge.16 Jennings remained at the helm for the fourth and final game in Pittsburgh.

Both pitchers of record on July 26 returned to start the series finale. McGraw had called on veteran Jesse Barnes to protect a two-run lead in the ninth, but Barnes allowed the tying runs. Pittsburgh’s George Gibson then summoned Whitey Glazner, appearing in relief for only the second time since April, for the 10th. When Glazner allowed Bill Cunningham’s tiebreaking triple, he lost for only the second time in 11 decisions, and Barnes took the win.

New York went ahead in the second inning against Glazner. George Kelly hit a leadoff single and moved to third on Meusel’s single. Johnny Rawlings hit a fly ball to center; Max Carey made the catch and threw home as Kelly tagged and scored.

Sensing an opportunity, Meusel tagged up and ran for second. Rabbit Maranville cut off Carey’s throw and relayed to second baseman George Cutshaw, but the ball went into the outfield; Meusel took third.

Earl Smith’s grounder toward first appeared to handcuff Charlie Grimm. Grimm scooped the ball as Meusel streaked home, but his throw was late and Meusel slid in safely, giving the Giants a 2-0 lead.

Barnes contained Pittsburgh for two innings, but the Pirates struck back in the third. Carson Bigbee tripled down the right-field line and scored on Carey’s groundout. Then Maranville singled; Cutshaw followed with a single to left, and Maranville raced to third. Meusel’s throw was too late to get Maranville, and Cutshaw took second.

Possum Whitted blooped a single into right, scoring Maranville. When Clyde Barnhart singled, just out of Meusel’s reach, Cutshaw scored, and the Pirates were ahead, 3-2.

Barnes’s day was done; Jennings brought in Douglas. A month earlier, Douglas — a much-traveled right-hander with a history of alcoholism and periodic disappearances — had left the Giants for four days after pitching all eight innings during a slugfest loss to the Phillies. A year later, Commissioner Kenesaw Mountain Landis banned Douglas based on evidence that he intended to defect to the St. Louis Cardinals. But here, Douglas induced Grimm to ground to Bancroft, who started an inning-ending double play.

Three straight outs followed Meusel’s leadoff single in the fourth, and the Pirates resumed their attack in the bottom of the inning. Bigbee singled with two outs. He took off on a steal and continued to third when catcher Smith’s throw went into the outfield. Carey’s single scored Bigbee for a 4-2 Pittsburgh advantage.

Douglas settled in, retiring the Pirates in order in three of the next four innings. Bigbee and Maranville singled in the seventh to put two on with one out, but Douglas set down Cutshaw and Whitted to keep the Giants close.

In the meantime, Glazner zealously guarded Pittsburgh’s lead. He pitched around walks to Bancroft and Youngs in the fifth and singles by Meusel and Smith in the sixth. When the Giants were three up, three down in the eighth, Glazner had six consecutive scoreless innings, and the Pirates were three outs from a series split.

Earl Smith led off the ninth for the Giants by working the count full, then taking ball four. Jennings went to his bench, sending in Eddie Brown to bat for Douglas and Cunningham to run for Smith.

Brown hit a high fly to short left. Bigbee, positioned deep, had no chance at a play. Maranville hustled back, “sprint[ing] afar in left,” but the ball fell for a hit.17 “Bigbee would get the same ball nine out of ten times, as it was high,” Charles J. Doyle asserted in Pittsburgh’s Gazette Times.18 “[B]ut, unfortunately, he was too deep in this instance.”19 Burns hit a high bouncer to third; Barnhart could only knock it down. The bases were loaded.

Bancroft lined to left; Bigbee made a shoetop catch and threw to second — narrowly missing a double play on Brown — as Cunningham tagged and scored. The Giants now trailed 4-3.

Frisch batted with two on, one out, and a major slump to his name. He had only six hits in his last 44 at-bats, including an 0-for-4 in this game. His double a day earlier was his first extra-base hit in 11 games.

Glazner remained on the mound. Frisch lined his pitch into the gap in left. Brown scored, and Burns was waved home as the potential go-ahead run.

Carey threw to Cutshaw, who relayed to Walter Schmidt at the plate. The ball came in high, sailing over Schmidt and into the stands. Frisch was awarded home; the Giants had three runs on the play — and four in the inning — for a 6-4 lead.

Jennings gave the ball to Rosy Ryan in the ninth. Ryan retired the Pirates in order, completing an outstanding relief performance by the Giants. Douglas and Ryan had allowed only a single run in 6⅔ innings. About 48 hours after a five-game deficit seemed imminent, the Giants now trailed the Pirates by only a game.

Despite the addition of Meusel and their late-July heroics, New York’s path proved more wandering than straightforward. The Giants fell 7½ games behind Pittsburgh by August 22 before surging to the pennant on a 23-7 streak, fueled by Meusel’s .424 average from August 24 to September 26. They finished 4½ games ahead of the second-place Pirates and won the World Series over the New York Yankees — with younger brother Bob Meusel in right for the American League champs — as Irish Meusel batted .345 and led all players with seven RBIs.

Around 35 years after this game, in the mid-1950s, the author’s father, age seven or eight, was attending a youth baseball clinic in Pittsburgh. The star instructor was Frankie Frisch, by then a member of the Baseball Hall of Fame.

At the end of the clinic, all of the youths were gathered in a pavilion for final words of encouragement. Frisch was addressing the group, and he called out, “Where’s my little left-hander?” He pointed at the author’s father and asked him to demonstrate his windup, which the author’s father did. (The author’s father later lettered in baseball at the University of Pittsburgh and served as a left-handed batting-practice pitcher for the Pirates during the 1968 season.)

Special thanks to SABR member Lyle Spatz for his insightful comments on an earlier draft of this article.

6 “Bancroft Traded to New York Giants: Phils Give Crack Shortstop to McGraw in Exchange for Fletcher and Rawlings — No Money Involved, Says Baker,” Philadelphia Inquirer, June 8, 1920: 14; Lyle Spatz and Steve Steinberg, 1921: The Yankees, the Giants, & the Battle for Baseball Supremacy in New York (Lincoln, U. of Nebraska Press: 2010), 183.

7 Eddie Brown, who had debuted in the major leagues by playing in three games with the Giants in 1920, opened the season in center. When Ross Youngs, sidelined by a preseason knee injury, returned to the lineup in right on April 30, McGraw reassigned Curt Walker and Lee King, New York’s right-field platoon in Youngs’ absence, to platoon in center. That arrangement continued until July 1, when the Giants traded King and two other players to the Phillies for Casey Stengel and Johnny Rawlings; for about two weeks afterward, McGraw played Stengel or Walker against right-handers and Brown against left-handers. In mid-July, New York obtained Bill Cunningham from Seattle of the Pacific Coast League; he received most of the starts against left-handers until the Meusel trade.

11 “Time Landis Called a Halt to Activities of J.J. McGraw.”

15 “M’Graw Suspended; Rawlings Is Fined for Talk to Klem: New York Manager and His Second Baseman Both Are Penalized by President Heydler for Kicking After Tuesday’s Game at Pittsburgh,” Pittsburgh Post, July 28, 1921: 7.

16 “Denies Bidding for Weaver: McGraw Says He May Do So if He Is Allowed to Play Again,” New York Times, July 30, 1921: 10. Heydler reinstated McGraw for the Giants’ July 29 game in Cincinnati.