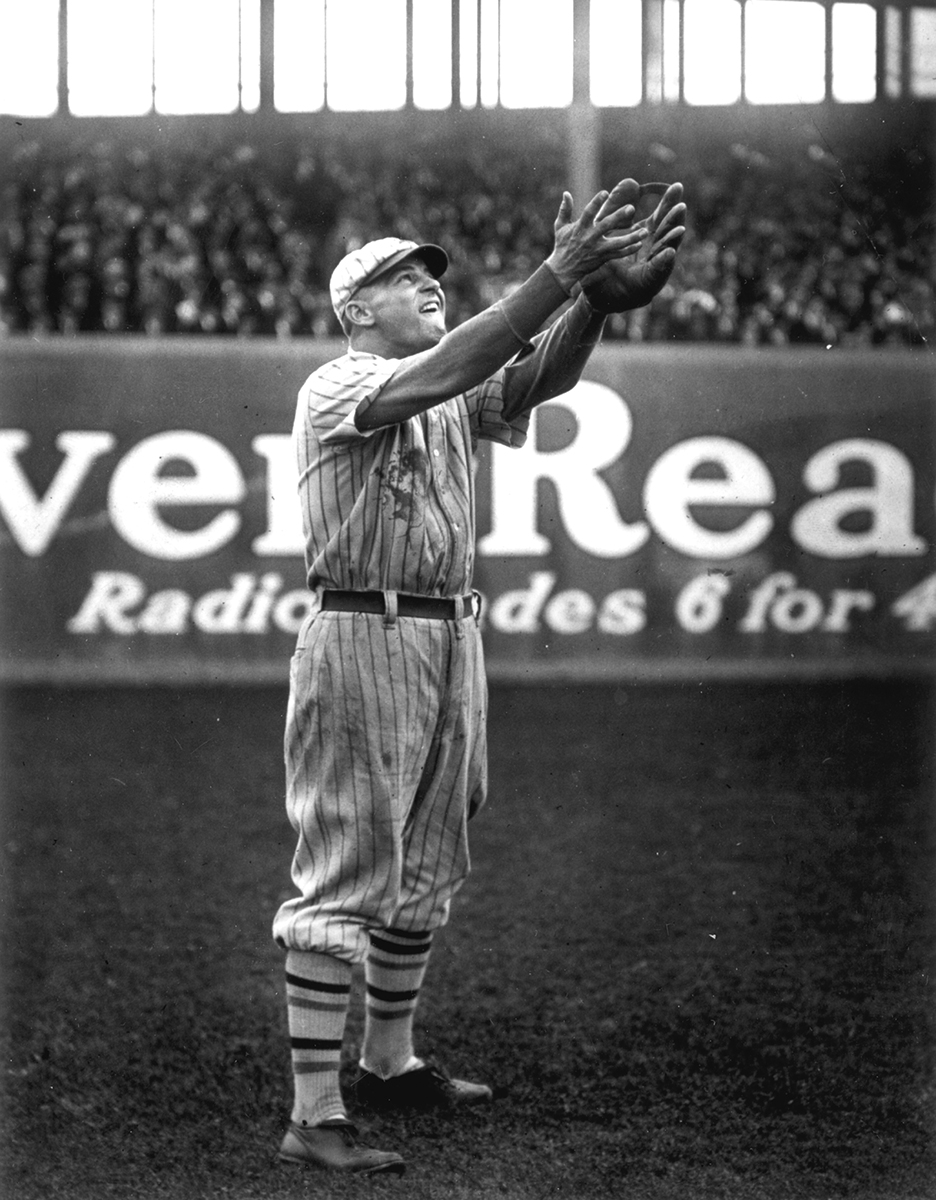 The New York Giants surged into the National League pennant race in 1921 after star right fielder Ross Youngs’ return from a preseason knee injury but still ran second behind the first-place Pittsburgh Pirates in late July. With the Giants trailing in Pittsburgh on July 26 and in danger of falling five games back of the Pirates, Youngs hit an eighth-inning bases-clearing triple and scored the winning run in the 10th, sparking New York to a 9-8 win at Forbes Field.

Born in Shiner, Texas, and raised in San Antonio, Ross Middlebrooks Youngs1 debuted in 1917, claimed his spot in the Giants outfield soon afterward,2 and earned a reputation for hustle, savvy defense,3 and a keen batting eye. In each of his first three full seasons, the lefty swinger ranked in the NL’s top 10 in batting average and on-base percentage, trailing only Rogers Hornsby in both in 1920. John McGraw, whose New York managerial tenure included Youngs’s entire big-league career, reportedly regarded Youngs as the greatest player he ever managed.4

In 1921 a sprained knee during an exhibition game5 kept Youngs out of the lineup until April 30.6 The Giants snapped a four-game losing streak that day and won 14 of their next 16. They assumed second place on May 14 and remained there for weeks, then months, never more than a handful of games behind the Pirates. When New York arrived in Pittsburgh on July 25 for a four-game series, the Pirates, leading by three games, had held first for all but one day since April 19.7 Young led all Giants regulars with a .349 average and .449 on-base percentage.

Pittsburgh won the series opener to go up by four games.8 That evening, New York traded for Philadelphia Phillies’ outfielder Irish Meusel, but he did not arrive in Pittsburgh until the third game, on July 27.9 In the meantime, it was up to right-hander Fred Toney – accused during the Black Sox trial, just days earlier, of involvement with gamblers, then cleared by NL President John Heydler10 – to keep the Pirates from getting further ahead.

The Giants’ afternoon began inauspiciously; shortly before the first pitch McGraw was served with a lawsuit, alleging he assaulted a local man when the Giants were in Pittsburgh in June.11 McGraw “glanced at the [legal] papers, turned, and walked away without speaking.”12 Toney and lefty Earl Hamilton traded zeroes early on, but Hamilton jump-started the Pirates with one out in the third, driving Toney’s pitch to the scoreboard in right-center and reaching third for a triple. Max Carey’s two-out single gave Pittsburgh a 1-0 lead.

The Pirates kept up the pressure in the fourth. George Cutshaw led off with a walk and advanced on Possum Whitted’s sacrifice. Clyde Barnhart grounded to short, and Cutshaw dashed to third, beating Dave Bancroft’s throw and Frankie Frisch’s tag with a slide. Runners were at the corners for Charlie Grimm.

Grimm lined Toney’s pitch to right-center. Bill Cunningham, acquired from the Pacific Coast League’s Seattle Rainiers earlier in July,13 reached for the ball on a hop, but it went past him and bounced to the scoreboard. Cutshaw and Barnhart scored, and Grimm circled the bases, sliding home to complete the three-run homer. “[Thirteen thousand] throats tore loose with all the din that accompanies a world’s series ball game,” the Pittsburgh Post observed.14 The Pirates led, 4-0.

Hamilton had set down the Giants in order in the fourth. Now with a big lead after Grimm’s homer, he mixed “slow hooks, with an occasional fast ball” for one-two-three innings in the fifth and sixth.15 Giants coach Hughie Jennings – known as “Ee-yah!” for his frenetic enthusiasm since his days as McGraw’s teammate with the Baltimore Orioles in the 1890s – attempted to rally the team in the dugout, as each out brought them closer to defeat.16 When Frisch and Youngs opened the seventh with groundouts, Hamilton had retired 12 straight and allowed only two hits.

George Kelly batted with two outs. Four seasons earlier, Kelly had bounced between the Giants, the Pirates, and the waiver wire, playing in eight games with Pittsburgh before McGraw gave him another opportunity. By 1920 he was the Giants’ starting first baseman, and his 16 home runs so far in 1921 led the NL.

Kelly got ahead in the count, 2-and-1. Hamilton went low and inside, and Kelly lined it to left, over a high concrete barrier and “just high enough to clear the leftfield wall,” reported Pittsburgh’s Gazette-Times.17 Pittsburgh’s lead was down to 4-1.

The Pirates got the run back in the bottom of the inning when Cutshaw singled home Carey. Only George Burns’s inning-ending catch of Whitted’s liner to left – “an inch above the grass” – kept Pittsburgh from increasing its 5-1 advantage even further.18

Six outs from victory – and a five-game lead in the standings – Hamilton returned in the eighth. Perhaps he was feeling, as the Pittsburgh Post theorized, depleted from the “hard run around the paths” on his third-inning triple.19 Perhaps it was fatigue from pitching past the ninth in each of his past two starts.20 Whatever the reason, the Giants – with only Kelly’s homer to show for their past 14 batters – struck back hard in the eighth.

Johnny Rawlings started the inning with a single; Frank Snyder doubled him to third. Pinch-hitter Eddie Brown hit a grounder to Cutshaw at second. The ball bounced off Cutshaw’s shins and Rawlings scored. (The official scorer ruled it a hit.) Burns followed with a double to right, scoring Snyder and moving Brown to third.

Pittsburgh’s lead was now 5-3, and manager George Gibson called on Hal Carlson, an effective pitcher in 1919 who had struggled ever since the spitball was outlawed a year later. Here he was wild, walking Bancroft to load the bases.

Frisch popped up for the first out, but Youngs drove Carlson’s pitch into the left-field corner. Brown, Burns, and Bancroft scored; Youngs reached third with a triple. The Giants had scored five runs for a 6-5 lead. McGraw brought in Rosy Ryan, who held the lead through the eighth.

New York added on in the ninth. Ryan singled with two outs. Burns drove a ball over Carson Bigbee’s head in center for a double, and Ryan ran home. Bancroft tripled to deep left, scoring Burns. The Giants took an 8-5 advantage to the bottom of the ninth.

“Most of the rooters remained … to comfort the home team,” the Pittsburgh Post reported.21 Ryan returned to the mound, needing three more outs. Ray Rohwer batted for Carlson and ripped Ryan’s pitch over Youngs’ head. The ball bounced off the screen in front of the right-field bleachers; Rohwer made it to third with a triple. Bigbee then drove one to right-center for another triple, hitting the fence between the scoreboard and bleachers. Rohwer scored, and the Pirates trailed 8-6.

McGraw summoned Jesse Barnes. Two seasons after an NL-leading 25 wins, Barnes was usually a starter in 1921, but McGraw occasionally deployed him in relief to protect late-inning leads. Carey flied out to center for the first out; Bigbee scored to make it a one-run game.

Rabbit Maranville re-ignited the rally with yet another triple down the right-field line. With the potential tying run on third, McGraw drew the infield in. Cutshaw hit a bouncer to short; Maranville dashed for the plate. Bancroft threw home, but Snyder dropped the throw. Bill Klem gave the safe sign, and the game was tied.

“[T]he audience resembled a national convention of lunatics,” the Pittsburgh Post observed.22 “Fans leaped in the air, smashed their hats for joy, and screamed at the top of their voices. Youths trembled as if they had ague and old men danced until their false teeth rattled. Score cards were ripped into shreds and a paper snowstorm followed.”23

Whitey Glazner, Pittsburgh’s third pitcher of the afternoon, came in for the 10th. He had started 1921 in the bullpen, but outstanding relief work put him in the starting rotation by May. Four days earlier, he had beaten the Boston Braves with a 13-inning effort, running his season record to 9-1.

Youngs led off by hitting a single to left for his third hit of the game. Kelly fanned, bringing up Cunningham, his two-week tryout in center against lefty starters already doomed by the Meusel trade. Cunningham drove a 2-and-2 pitch to deep right-center for a triple, the seventh three-base hit of the afternoon in baseball’s most triple-friendly park.24 Youngs scored, and the Giants again were ahead.

This time, Barnes made it stand up, dodging Walter Schmidt’s two-out single to close out the game. Pittsburgh’s hoped-for five-game lead was now only three.25

Youngs rapped out four more hits a day later in New York’s 4-1 win,26 and the Giants made it three wins in a row with a four-run ninth-inning rally on July 28.27 With just over two months left in the season, Pittsburgh’s lead was only one game.

The series foreshadowed the Pirates’ visit to the Polo Grounds in late August. Pittsburgh led the NL by 7½ games on August 23, but the Giants swept a five-game series, kicking off a run of 20 wins in 24 games between August 24 and September 17 that propelled McGraw’s team to the first of four consecutive NL pennants and a World Series win over the New York Yankees.

Youngs was among the NL leaders in batting average and on-base percentage again in 1921. He remained a Giants fixture until a kidney disease sidelined him in August 1926, less than nine years after his first major-league game, leading to his death in October 1927 at the age of 30. Eulogized on a Polo Grounds plaque as a “brave, untrammeled spirit of the diamond,” Youngs was inducted into the Baseball Hall of Fame in 1971.28

I was living in San Antonio, where Ross Youngs grew up, died, and was buried, when I wrote this article in June and July 2021. My wife, Dawn, and I visited Youngs’ gravesite in San Antonio’s Mission Burial Park to pay our respects. 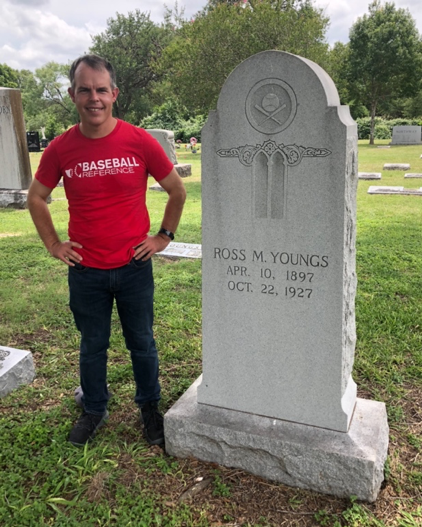 Special thanks to SABR member Lyle Spatz for his insightful comments on an earlier draft of this article.

1 During Youngs’ career, newspaper coverage often referred to him as “Ross Young.” A 1920 article from New York, reporting on the Giants spring training in San Antonio, noted, “A great secret has finally become public property. Ross Young is really Youngs. The Youngs family lives here and the local papers refer to Ross as Youngs. The final ‘s’ was dropped for the sake of euphony.” Daniel, “‘No Shirkers,’ Is M’Graw’s Warning: Manager Arrives and Gives Giants Their First Lecture of the Year,” Sun and New York Herald, March 5, 1920: 11. Even after Youngs’ death in 1927, New York’s Daily News asserted, “The untimely death of Ross Young [sic] was a sad blow to Kid Baseball.” “A Dauntless Spirit,” Sunday News (New York), November 13, 1927: 35.

11 “Asking $20,000, Local Man Alleges He Was Assaulted by M’Graw: Was Helping Manager into Bed When He Hit Him, George Duffy Says,” Gazette Times (Pittsburgh), July 27, 1921: 1. Newspaper coverage provides no further information on the resolution of the lawsuit.

20 Hamilton pitched all 10 innings in the Pirates’ 4-2 win over the Giants at the Polo Grounds on July 17. Five days later, in the first game of a doubleheader, Hamilton lost a 2-1 decision to the Boston Braves on a bases-loaded walk in the bottom of the 10th inning.

25 It was not an entirely happy ending for the Giants. McGraw, Rawlings, and Barnes confronted Klem under the grandstand after the game about Klem’s call on the play at home plate on Maranville in the ninth inning, when Pittsburgh scored the tying run. According to Klem, “Rawlings called me a name no gentleman would call another and I distinctly heard McGraw shout that I was a crook.” Heydler suspended McGraw indefinitely and fined Rawlings and Barnes. McGraw went to Chicago after the game, where Heydler was attending the Black Sox trial, to appeal the suspension, and Jennings managed the Giants for the rest of the series. “McGraw Suspended; Fine Barnes and Rawlings,” New York Herald, July 28, 1921: 12. Heydler reinstated McGraw for the Giants’ July 29 game in Cincinnati.