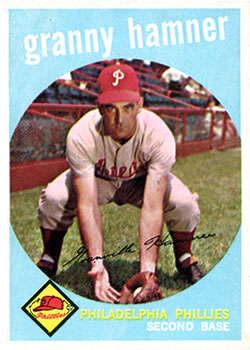 The knuckleball has danced through the fantasies of fans and ballplayers for generations. It looks so effortless, and those who master it can seemingly pitch until they’re 50 years old. Throwing a pro-quality flutterball is much harder than it looks, of course. But once in a while, the knuckler makes a big-league dream come true, as it did for Granny Hamner in 1962.

Hamner earned his place in baseball history as an infielder, primarily a shortstop. He played on the Philadelphia Phillies’ 1950 National League champion Whiz Kids, leading the league in games played and hitting .429 in a losing World Series effort against the New York Yankees. He served for a time as the Phillies’ captain and earned All-Star Game nods from 1952 through 1954 – starting one game at shortstop and another at second base.

Hamner’s successful career in the infield obscured his aspirations as a pitcher, pursued fruitlessly during the 1950s. Before he reached “The Show,” Hamner pitched successfully in high school and during US Army service. In 1953, his Phillies teammates rated his knuckleball second-best on the team, behind that of Johnny Lindell. As injuries took their toll on his infield career, Hamner requested chances on the mound; the Phillies even listed him as a pitcher during 1957 spring training. But he managed to coax only four regular-season pitching appearances in 1956 and 1957, going 0-1 with a 3.86 ERA.1

Hamner became a minor-league coach and manager after winding down his infield career with Cleveland in 1959. As the skipper of Kansas City A’s farm clubs in 1961 and 1962, he kept his pitching dream alive by giving himself regular opportunities on the mound. Everything finally clicked with the 1962 Binghamton Triplets of the Class A Eastern League. At age 35, Hamner completed all 14 games he started, compiling a 10-4 record and 2.03 ERA in 22 appearances.2 The Eastern League credits him as the loop’s ERA leader that year, placing him in a club of ERA champions that also includes future big-league stars Allie Reynolds, Whitey Ford, Juan Marichal, and Jon Lester.3 He used a compact windup with a three-quarters delivery, gripped the seams of the ball with his fingernails, and occasionally mixed in a fastball.4

Hamner’s unexpected success began to attract national attention. The Sporting News reported on July 14 that the A’s might give him a shot at the majors.5 The call came less than two weeks later, as the A’s demoted pitcher Bob Giggie to make room for Hamner.6 Membership in the Kansas City organization proved to be Hamner’s good fortune: At the time of his call-up, the A’s pitching staff had a league-worst 5.14 ERA.7 “The way we’ve been going,” manager Hank Bauer said, “I figure if I keep shuffling the pitchers enough, I’m going to come up with pitchers who can do the job.” Bauer also promised to give Hamner work, saying, “The only way to see what he can do, though, is to put him in the game.”8

In the first game of a doubleheader at Baltimore on July 28, Hamner had no opportunity to pitch, as Ed Rakow went the distance for Kansas City in a 3-0 loss. The second game pitted A’s right-hander Jerry Walker, with an 8-7 record, against Baltimore righty Dick Hall, who was 3-2 and making his first start of the season after 26 relief outings. Hall had also made the conversion from hitting to pitching. He came up through the Pittsburgh Pirates system as an outfielder, playing 112 games with the team in 1954 before successfully shifting to the mound in 1955. Manager Billy Hitchcock’s Orioles entered the day in fifth place with a 51-50 record, 10 games behind the league-leading Yankees. Kansas City stood in ninth place with a 44-57 record, 17 games out.

In front of 11,399 fans, Baltimore loaded the bases in the first on an error and two walks. Walker escaped the jam by getting rookie left fielder Boog Powell to ground out to first baseman Norm Siebern. The Orioles came right back in the second inning as shortstop Jerry Adair singled and took second on a groundout. Hall walked, and one out later, right fielder Whitey Herzog walked to load the bases. Center fielder Jackie Brandt singled home Hall and Adair for a 2-0 Baltimore lead. Herzog, caught between second and third, was retired in an infield rundown9 to end the inning.10

Herzog atoned for his baserunning goof in the fourth. Orioles catcher Hobie Landrith reached when Jose Tartabull dropped his fly ball to shallow center field after a long run.11 Landrith took second on Hall’s sacrifice, and one out later, Herzog’s double to right field brought him home for a 3-0 lead.

Hall cruised through the first five innings, allowing the Athletics only three harmless singles. He missed a chance to help himself in the bottom half of the inning, though. With two outs, Powell singled and Adair doubled him to third. The A’s intentionally walked Landrith to get to Hall, and the pitcher flied out to center to strand the bases loaded.

The A’s went down quietly yet again in the sixth. Bauer opted for a pitching change in the bottom half. True to his word, he decided to see what his newly arrived knuckleballer could do, nearly three years to the day after Hamner’s last appearance in the majors. Hamner nervously took the mound to face the top of the Orioles’ lineup.12 Second baseman Johnny Temple grounded to shortstop, Herzog walked, and Brandt and first baseman Jim Gentile popped out to second base and shortstop, respectively.13

Kansas City got its first baserunner into scoring position in the seventh on a one-out double by left fielder Manny Jimenez, but the A’s could not advance him. Hamner returned to pitch the bottom of the inning, getting Brooks Robinson and Powell on groundballs. He landed in a mild two-out jam as Adair singled and Landrith drew a walk. But Hall, up next, popped out to first base to wrap up another shutout inning.14

Wayne Causey pinch-hit for Hamner in the eighth, grounding out as part of yet another punchless inning for Kansas City.15 Rookie John Wyatt relieved in the bottom of the eighth and failed to retire a batter, surrendering four hits and four runs, including a three-run homer by Gentile that made the score 7-0. Bauer summoned 20-year-old Panamanian rookie Rupe Toppin to make his major-league debut, and Toppin closed out the inning without allowing any more runs. He gave up one hit.

Kansas City’s bats came alive long enough in the ninth to ruin Hall’s shutout, as second baseman Jerry Lumpe doubled with one out and Siebern drove him in with a single to right. Hall retired Jimenez and Gino Cimoli to wrap up a six-hit, 7-1 win in 2 hours and 30 minutes. Hall struck out 12 batters and issued no walks.

Hamner’s big-league honeymoon lasted three days, until an August 1 doubleheader against Detroit. In the first game, Hamner entered in the ninth inning and gave up a wild pitch, two walks, and two singles, turning a 5-3 A’s lead into a 6-5 defeat and taking the loss. In the second game, a 9-1 blowout, Hamner worked the last two innings, giving up seven hits and five runs. That deflated his comeback.16 He retired for good shortly afterward, and when spring training 1963 rolled around, he was doing a different kind of managing – running a bowling alley in Petersburg, Virginia.17

Image of 1959 Topps card #436 downloaded from the Trading Card Database. The back of the card notes: “After a couple of seasons of trying to become a pitcher, Granny concentrated on the infield.”

2 News reports from 1962 credit him with an ERA of 1.91 at Binghamton, but Baseball-Reference and league records list his ERA as 2.03.

6 Giggie, who had a 1-1 record and a 6.28 ERA when he was sent to the minor leagues, never pitched in the majors again.

7 The A’s pitchers improved somewhat in August and September and closed the year with a 4.79 ERA – still worst in the American League.

13 Baseball-Reference describes the outs by Brandt and Gentile as infield flies. Retrosheet does not have specific details, and game accounts in the Baltimore and Kansas City newspapers did not go into detail.

14 Again, Baseball-Reference lists the play as a popup, while Retrosheet and game stories from the Baltimore and Kansas City papers are not specific.

15 Causey’s batting average at the time, .261, was not an improvement over Hamner’s lifetime big-league batting average of .262. However, Hamner hadn’t swung a bat in the big leagues since 1959.

16 Rupe Toppin also made his second and final major-league appearance in the second game against Detroit.