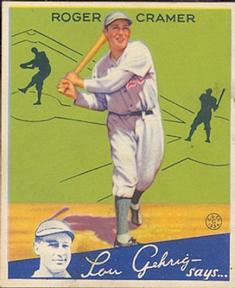 The saying goes, “Once is a chance. Twice is a coincidence. Three times is a trend.”1

The 1934 Philadelphia Athletics’ ability to win appeared to be by chance. On June 8 the seventh-place A’s started a three-game weekend series against the second-place New York Yankees. With a record of 18-26, a month had elapsed since Philadelphia had won two games in a row (perhaps a coincidence, on May 9-10).

In this series, the Yankees won on Friday, but the A’s took Saturday’s contest. The rubber game of the series was played on Sunday, June 10, before a crowd of 20,000 at Yankee Stadium. Was there to be another coincidence? Unfortunately, no. Despite Doc Cramer hitting for the cycle, the Athletics fell victim to the home team, 7-3. The Philadelphia Inquirer told its readers the next morning that “Mr. [Connie] Mack’s winning streak of one straight snapped with a loud report in the finale.”2

Mack sent right-hander Roy Mahaffey (3-3) to the mound with the pitching duties. In his last four starts, he was either totally on or totally off. He had pitched two complete games (earning victories), but in the other two games, he had lasted a total of 2⅓ innings and fortunately for him had not been given a decision. (The Athletics had lost both games.) For New York, Johnny Murphy, also a righty, got the start. Murphy (4-2) was technically a rookie, making his fifth start of the season.3 He had won his last three decisions, with two of them being complete games.

Murphy established his dominance early. Although he allowed a double to Cramer, he struck out both Dib Williams and Jimmie Foxx to end any first-inning threat. In the bottom of the first, Mahaffey was not so fortunate and “was not in public view long.”4 Yankees leadoff batter Myril Hoag walked and Red Rolfe singled. Babe Ruth also walked, loading the bases. Mack must have lost faith in Mahaffey’s ability to recover from this lack of control, so he made a pitching change, bringing in Bill Dietrich to relieve Mahaffey. Dietrich had not pitched since May 18 and brought a 6.12 ERA with him.

The first batter Dietrich faced was Lou Gehrig, who “picked a swell time to clout out his 15th round trip blow of the season”5 by sending one of Dietrich’s offerings into the right-field stands. Instead of putting out the fire, “all Bill did was to throw kerosene on the blaze.”6 The first three runs were charged to Mahaffey. Dietrich retired the next three New Yorkers, but then he was touched for a run in each of the next two innings (Hoag hit an RBI triple in the second and Frankie Crosetti hit a fly ball in the third, driving in Ben Chapman), as the Yankees padded their lead.

The A’s loaded the bases in the fourth, but Frankie Hayes bounced into a 6-4-3 double play to end the inning. Philadelphia finally broke onto the scoreboard in the fifth. With two outs, Cramer, who had singled in the third, “flogged the pill among shoals of white shirts in the right field terrace”7 for his second home run of the season. New York still led, 6-1.

Murphy held the A’s in check. Through seven innings, he had allowed just four hits, a single by Eric McNair in the fourth, and the three hits (double, single, and homer) by Cramer. In each of the second, fourth, and sixth innings, Murphy had allowed two batters to reach via bases on balls, but every time, any hope of a Philadelphia rally was silenced by the New York defense turning an infield double play.

In the home half of the seventh, Gehrig doubled with two outs off Johnny Marcum, who had entered the game as the third A’s hurler in the fifth inning. Chapman’s single to center plated Gehrig, and New York once again had a six-run lead.

In the eighth, Cramer completed the cycle by driving the ball into left-center for a triple. Bob Johnson then drove in Cramer when he “hit a mammoth three-bagger.”8 The ball rolled to the 490-foot sign in the outfield, but a quick relay to the infield held Johnson at third base. He did score, though, on a fly out by Foxx. McNair popped out at the plate; Murphy then gave up back-to-back two-out singles to Ed Coleman and Pinky Higgins, but Bing Miller grounded to second baseman Tony Lazzeri for the third out.

The Athletics threatened in the ninth, as Marcum and Williams opened the frame with back-to-back singles. (Rabbit Warstler entered as a pinch-runner for Marcum.) With the hot-hitting Cramer settling into the batter’s box, New York manager Joe McCarthy brought in Burleigh Grimes to close out the game and seal the Yankees’ victory. The veteran right-hander was in his 19th season, having just been acquired by New York on May 28. This was just his fourth appearance in an American League game. (His entire Hall of Fame career except for 10 games was played in the National League.9) The Daily News described the scene with, “the ancient and unshaven Burleigh Grimes came trotting out of the bullpen, dampened the ball with the end of his tongue [and] pitched to no more than two batters.”10 Cramer popped out to third in foul territory and Johnson grounded into a double play to end the game. It was the fourth double play turned by the Yankees in the game. Despite outhitting the Yankees (10 to 8), the A’s lost yet again, leaving nine runners on base.

In his first four at-bats, Cramer collected a single, double, triple, and home run, and, according to the Philadelphia Inquirer, “every one as clean as a shirt from the laundry.”11 He became the first batter in 1934 to accomplish the rare feat. Two weeks later, Gehrig joined the club, when he accidentally hit for the cycle against the Chicago White Sox on June 25. On August 19 Boston’s Moose Solters became the third player of the season to hit for the cycle, before a record crowd of 46,995 at Fenway Park. Cramer became the 13th batter in Athletics franchise history to hit for the cycle.

A record eight batters had hit for the cycle in 1933,12 including three members of the Athletics (Mickey Cochrane, Foxx, and Higgins). When Cochrane accomplished the rare feat (for the second time in his career) on August 2, 1933, it was also against the New York Yankees. Coincidentally, in that game, Ruth’s batting line was identical to this game: 0-for-1 with three walks, and he was also replaced late in the game by Sammy Byrd.

Back to the old saying. After this game, Philadelphia continued its pattern of surrounding any victory with one or more losses. The Athletics finally won two in a row on June 16-17 and again on June 28 and 30, but they won more than two games in a row just once (July 4-5, including a doubleheader sweep of the Washington Senators on Independence Day). This remained the status quo until August 17, when the Mackmen completed a four-game home sweep of the White Sox. Then, from September 16 to 20, Philadelphia won seven straight on the road against St. Louis and Chicago. That “trend” moved them from seventh place to fifth in the final AL standings for 1934.

1 When I was dean of academic life at Muhlenberg College, I used this saying to motivate students to make the Dean’s List for academic achievement. It is a variation of the Ian Fleming quote, “Once is happenstance. Twice is coincidence. Three times is enemy action.” Found online at goodreads.com/quotes/418466-once-is-happenstance-twice-is-coincidence-three-times-is-enemy.

3 Murphy appeared in two games for the Yankees in May 1932, but spent the rest of the season (and all of 1933) with the Newark Bears in the International League. In 1934 he joined New York right out of spring training.

9 Grimes, age 40, had been released by the St. Louis Cardinals on May 15, 1934, and then signed by the Yankees on May 28. He made 10 appearances before New York released him, on July 31. The Pittsburgh Pirates signed him a week later (and subsequently released him on October 11). It was his third stint with the Pirates, and he retired at the end of the season.

12 This record of eight batters hitting for the cycle in the same season was tied in 2009. In both seasons (1933 and 2009), each of the eight cycles was accomplished by a different batter.