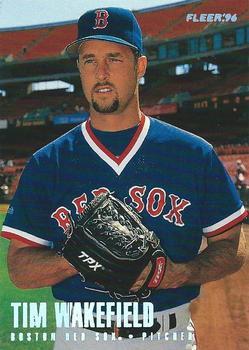 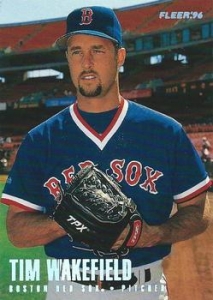 By the numbers, Boston Red Sox pitcher Tim Wakefield’s start against the White Sox on June 10, 1996, looks like one of the worst games of his 19-season career. On a foggy night, Wakefield yielded a career-high 16 hits, along with eight runs, as Chicago steamrolled the struggling Red Sox 8-2 before a crowd of 21,7991 at Comiskey Park.2

While Wakefield’s effort doesn’t look like much in retrospect, it was appreciated at the time in the Boston clubhouse. With his bullpen exhausted from heavy work, and scheduled starter Aaron Sele out with a stomach virus, Boston manager Kevin Kennedy gave a spot start to Wakefield on two days’ rest and beseeched the 29-year-old knuckleballer to pitch a complete game, or as close to one as he could muster.3

Wakefield fell behind 5-2 after three innings and threw 162 pitches but stayed on the job for all eight innings. The next day’s Boston Globe game report summed up his performance: “You must tip your cap this morning to Wakefield … who was a sacrificial lamb.”4

Boston entered the season as the defending American League East champions, having outpaced the archrival New York Yankees by seven games in 1995.5 But the team stumbled badly out of the gate, posting a 4-16 record in its first 20 games. On June 10 the Red Sox were in fourth place with a 24-36 record, 11 games behind the first-place Yankees. First baseman Mo Vaughn, coming off an AL Most Valuable Player season, was a rare bright spot. At the start of the day, he ranked among the league’s top four players in batting average (.367), on-base percentage (.463), slugging average (.700), home runs (22), and RBIs (63).

Boston had gone 4-6 in its previous 10 games—a disappointing number, and one that told only part of the story. Through a combination of extra-inning games (three in five days) and subpar starting pitching performances, the Boston bullpen had been forced to work a combined 23⅓ innings in the previous five games. This included Wakefield’s previous start, on June 7, when the Milwaukee Brewers knocked him out in the fourth inning. He had given up 11 hits and seven earned runs, though Boston pulled out a 10-7 win.

Frustrations around the Red Sox were beginning to boil over. On June 8, ace Roger Clemens left a game against Milwaukee with a 2-1 lead in the eighth inning. The Red Sox coughed up the lead, chiefly because of fielding miscues, and lost 3-2 to the Brewers in 10 innings. An angry Clemens left Fenway Park before the game ended.6

The next day Peter Gammons, the Boston Globe’s respected baseball writer, filed a highly critical column about Kennedy. Gammons alleged that the manager’s relationship with his scouting and minor-league departments was “at an all-time low,” that he was prone to taking credit for victories and blaming others for defeats, and that Kennedy had shown disrespect by being as much as an hour late to general manager Dan Duquette’s organizational conference calls.7 Team owner John Harrington subsequently called Kennedy to offer some support.8

In contrast, manager Terry Bevington’s White Sox were outperforming expectations. Coming off a 68-76 third-place finish in 1995, the Chicago team entered the day in first place in the AL West, tied with the Cleveland Indians at 39-21. The team had won 18 of its previous 21 games.9 “It’s fun again to come to the ballpark,” first baseman Frank Thomas said.10

Major contributors included Thomas, league leader in RBIs with 66; reliever Roberto Hernández, second in the AL with 19 saves; and starting pitchers Kevin Tapani and Alex Fernandez, both in the top five for ERA. Tapani, with a 6-3 record and 3.10 ERA, started for Chicago on June 10. He’d been a major free-agent signing in the offseason.

Boston hung an earned run on Tapani in the first inning, starting with a leadoff double to center field by second baseman Jeff Frye. Frye moved to third on a deep lineout by Vaughn and scored on a wild pitch, Tapani’s first of two that night. The White Sox roared back in the bottom half, as two singles and a deep lineout put runners on first and third. Robin Ventura grounded to Vaughn, who threw to shortstop John Valentin for the force at second as a run scored. But Valentin’s return throw to Wakefield covering first went wild.11 Ventura moved to second and scored from there on Harold Baines’ groundball single for a 2-1 Chicago lead.

Chicago went station-to-station for another run in the second inning. Shortstop Ozzie Guillen singled, moved to second on a groundout, and scored on a single to center field by center fielder Dave Martinez. The Chicago Tribune reported the next day that the White Sox may have collected “as many dink hits as line shots” off Wakefield. But whether hard or soft, they were all base hits.12

Boston fought to stay in contention. In the third, center fielder Lee Tinsley and Frye singled.13 Boston had traded Tinsley to Philadelphia in the offseason but reacquired him the day before the game when Dwayne Hosey couldn’t hold the starting center-field job.14 Vaughn’s sacrifice fly to left scored Tinsley and brought the Red Sox to within a run, 3-2.

It wasn’t enough, as Chicago essentially put the game away in the bottom half. Singles by Baines and catcher Ron Karkovice put two White Sox on base, and a passed ball by catcher Mike Stanley allowed them to advance to second and third. Second baseman Ray Durham’s ground double down the left-field line scored both runners, giving Chicago a 5-2 lead.

Chicago small-balled its way to another run in the fourth on a single, a walk, and another single by Ventura, bringing the score to 6-2. The White Sox, who left the bases loaded, were clearly strolling away with the game. But Kennedy, mindful of his bullpen, kept Wakefield in: “Once they had control of the game, we let him go out there. Our bullpen has been taxed quite a bit lately. They all needed a day off. We were in a tough situation.”15

The game quieted down, with no runners advancing past second base, until the seventh inning. In the top half, Stanley reached third with two outs on a double and a grounder, but Tinsley struck out to end the inning. Karkovice made it 7-2 in the bottom half with a leadoff homer, his fifth of the season. Chicago added its eighth and final run in the eighth inning on singles by Thomas, Ventura, and right fielder Danny Tartabull.

Tapani earned the win with eight solid innings, lowering his ERA to 3.02 and giving him his ninth victory over Boston in nine decisions.16 “I didn’t feel like I was throwing that well,” he said later, “but at the end when you look up and see eight innings, five hits, two runs and two walks with nine strikeouts, I’ll take that almost every time out.”17 Lefty reliever Larry Thomas, playing his only full season in the majors, wrapped up with a shutout ninth inning.

Wakefield, in contrast, said he thought he had thrown fairly well: “I had decent stuff coming out of the pen. It wasn’t that bad in the game. They never really had a big inning. That’s what’s frustrating.”18

The last previous pitcher to give up at least 16 hits and throw a complete game was Mike Norris of the Oakland A’s, who gave up 17 hits in a 10-7 loss to the Milwaukee Brewers on September 26, 1980.19 Norris entered the ninth inning of that game with a 7-5 lead but surrendered an inside-the-park grand slam to Ben Oglivie and a home run to Gorman Thomas. A’s manager Billy Martin declined to explain to reporters after the game why he left Norris in to finish.20

As it happens, the soaring White Sox and slumping Red Sox finished the 1996 season with identical 85-77 records. Chicago couldn’t keep up its early-season pace. From the start of June through the end of the season, the team’s record was four games below .500. The White Sox finished a distant second, 14½ games behind Cleveland. Boston turned it on in August and September, posting a 38-19 record, and closed in third place, seven games behind the Yankees. It was not enough to save Kennedy’s job; Jimy Williams replaced him in the offseason.

Despite an up-and-down season, Wakefield led the 1996 Red Sox staff in wins with 14. Able to work as a starter, a long reliever, or even a closer,21 he became a Boston fixture, spending 17 seasons with the team and winning World Series rings in 2004 and 2007. As of January 2022, Wakefield’s 186 career wins as a member of the Red Sox ranked him third in franchise history, trailing only a pair of Boston legends, Cy Young and Clemens. He ranked as the team’s all-time leader in numerous categories, including batters faced (12,971), innings pitched (3,006), and games started (430).22 Those numbers say a lot about his value to the team. So do the 16 hits and eight runs he gave up on June 10, 1996, if you look at them in context.

Image of 1996 Fleer card #39 downloaded from the Trading Card Database.

1 Mention of foggy weather from Paul Sullivan, “Not Even Fog Can Stop Sox,” Chicago Tribune, June 11, 1996: 4:3. Sullivan’s story also characterized the turnout as “a crowd announced at 21,799,” suggesting some skepticism about its actual size.

2 The eight runs Wakefield gave up did not represent a career high. Earlier in the 1996 season, on May 5, he surrendered 11 runs to the Toronto Blue Jays and took the loss in an 11-4 defeat. He also surrendered nine runs in a game four times. The Comiskey Park where this game took place was the second Chicago ballpark by that name; as of 2022 it was known as Guaranteed Rate Field.

4 Whiteside, “Wakefield, Sox Are Beaten Down.” Whiteside reported that Wakefield threw 162 pitches; the Baseball-Reference box score for the game has 158 pitches.

5 The Red Sox were swept in the AL Division Series by the eventual league champion Cleveland Indians.

9 Whiteside, “Wakefield, Sox Are Beaten Down.”

13 Tapani threw his second wild pitch to move Frye to second, but Tinsley did not advance on the play.

16 Amore; Sullivan, “Not Even Fog Can Stop Sox.” According to Baseball-Reference, Tapani closed his career with a perfect 9-0 record and 3.41 ERA in 14 appearances against Boston, all starts.

18 Whiteside, “Wakefield, Sox Are Beaten Down.”