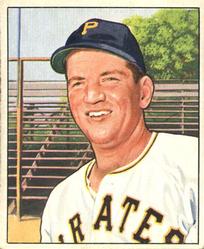 June 14 was the day before the 1949 trade deadline.1 According to the Boston Globe, the Boston Braves had sought Pittsburgh Pirates outfielder Wally Westlake “for a couple of weeks.”2 The 1948 Braves had made it to the World Series and were looking to repeat as National League champion. Could they add one bat to help them win the pennant?3

Boston had begun June in first place in the NL standings. They then won seven of their next 12 games and on June 14 were in a second-place tie with the St. Louis Cardinals, two games behind the Brooklyn Dodgers.

On June 14, still unable to swing a trade for Westlake or any other significant offensive help, the Braves started an 18-game road trip, opening a three-game series against the Pirates, who had just completed an 11-game road stretch of their own. Pittsburgh had won only three of those games and found itself “as a cellar-place entry in the league sweepstakes,”4 12½ games out of first.

A Forbes Field crowd of 29,639 turned out for what the Pittsburgh Sun-Telegraph called a “noisy ball game”5 between the Braves and Pirates. The fans witnessed a pitchers’ duel, three ejections, and a rare feat – Westlake, who had remained a Pirate despite the trade rumors, hit for the cycle, capping his big day with the game-deciding hit.

The 28-year-old Westlake was in his third big-league season. He was an everyday player who batted .285 in 1948, driving in 65 runs. In 1949 Westlake had increased productivity in every offensive category except batting average. That made him attractive to the Braves.

Right-hander Bob Chesnes started for the Pirates. With a 14-6 record in 1948 as a 27-year-old rookie, the former infielder and World War II Coast Guardsman had led Pittsburgh in wins. He brought a 3-2 record and a 5.11 earned-run average into the contest.

Opposing Chesnes was right-handed rookie Bob Hall, a Pittsburgh-area native.6 Hall was making just his third start of the season (ninth overall appearance). His ERA was 2.65, and he had held the Pirates to two runs in eight innings in a 2-1 loss at Forbes Field on May 20.

Both pitchers proved tough through the first five innings. Chesnes allowed two walks and two singles, but the Braves never threatened. Hall allowed runners in every inning but the fourth, but he worked out of each jam, including the second inning, when Pittsburgh had runners at second and third with only one out.

There was a little excitement in the third, however, after Hall induced Ed Stevens to ground out to second for the final out of the inning. Hall walked off the field, somewhat close to first-base coach Bill Posedel, and “swung his glove menacingly at the coach.” The two men argued before moving on to their respective dugouts. No reasons were printed in the papers about the encounter.

In the sixth, Chesnes struck out Boston’s leadoff batter Elbie Fletcher, but catcher Ed FitzGerald could not contain the breaking ball, and Fletcher – returning to Forbes Field as a visitor after more than six seasons with the Pirates – reached first on FitzGerald’s error.7

Pete Reiser followed with a single, putting runners at the corners. Bob Elliott, who had entered the game in an 0-for-24 slump, dating to June 1 (and was hitless in his first two at-bats of this game, singled to center, breaking the skid and driving home Fletcher for a 1-0 lead.

Another former Pirate, Jim Russell, also singled up the middle. Reiser scored Boston’s second run, but Elliott was gunned down at third by a strong throw from Westlake in center. Tommy Holmes notched the fourth straight single of the inning, and Russell advanced to third, but Chesnes recovered to retire both Alvin Dark and Bill Salkeld – yet another Brave who had previously played for Pittsburgh8 – on infield pop outs.

The Pirates responded with a run in bottom of the sixth. Westlake, who had singled in the third to extend his hitting streak to five games,9 led off with a triple to the gap in right-center. Stevens’s fly out to left drove in Westlake. The Braves still led, 2-1.

In the top of the seventh, Murry Dickson took the mound in relief of Chesnes. Dickson, a righty, had pitched on two World Series champion teams with the Cardinals before being sold to the Pirates for $125,000 on January 29, 1949. He had started the season in Pittsburgh’s rotation but moved to the bullpen in June after losing seven of his first eight decisions. Just five days before this game, Dickson had pitched 11 innings of scoreless relief in an 18-inning marathon game. In his 12th inning of work, he allowed two hits and a fly out to surrender the winning run.

After Hall had flied out to center to lead off the Braves seventh, Eddie Stanky, apparently disputing strike calls, was ejected by home-plate umpire Frank Dascoli while still at bat. Russell and Vern Bickford were also sent to the showers after carrying on the barbs from the dugout. Russell claimed that “Dascoli picked the wrong guy,”10 but he was ordered out, anyway. The Pittsburgh Sun-Telegraph told its readers that “as usual the ump was outnumbered, but as usual he had the last word.”11 Sibby Sisti batted for Stanky and grounded out.

Stanky’s and Russell’s ejections eventually proved to be disastrous for the Braves, but Boston extended its lead to 3-1 in the eighth. Hugh Casey was now on the mound for Pittsburgh. Elliott led off with a double “off the left-field screen”12 for his second hit of the game. After Marv Rickert, who had replaced the banished Russell, struck out, Holmes drove an RBI single into right field. The rally ended abruptly when Dark lined to first baseman Stevens for an unassisted double play.

Hall returned to the mound in the home half of the eighth with a two-run lead, but Westlake “was back in action” to spearhead Pittsburgh’s rally.13 With one out, he launched a solo home run into Greenberg Gardens,14 reducing the Pirates’ deficit once again to one run. It was Westlake’s 11th home run of the season.

In the bottom of the ninth, Pittsburgh still trailed by a run and Potter was on the mound. Stan Rojek grounded out, but Pete Castiglione singled and Dino Restelli walked. (This game was Restelli’s major-league debut, after the Pirates had obtained him from the San Francisco Seals of the Pacific Coast League.)

At this point, the seventh-inning ejection spree came back to haunt the Braves. Ralph Kiner’s grounder to short forced Restelli, but Sisti, who had remained in the game at second after batting for Stanky, threw wide to first, erasing a chance for a game-ending double play. Castiglione held at third.

With runners at the corners and two outs, Westlake then drove a 2-and-1 pitch to left field. The ball landed in front of Rickert, then “shot past his one-handed stab at it.”15

Backing up Rickert’s miscue, Reiser raced after the ball from center, but the relay to the plate was late. Castiglione scored the tying run, and Kiner the walk-off winner. Westlake was given credit for a double.

The Sun-Telegraph reported that “Westlake’s clouting put pitcher Ernie [Tiny] Bonham [who had pitched the ninth inning for Pittsburgh] into the winning column for the first time this season.”16

With the double, Westlake had hit for the cycle. In addition to scoring twice, Westlake drove in three runs against the Braves. His batting average increased by 14 points (to .292), and his slugging percentage shot up 40 points to .546.

The morning after this game, the Boston Globe reported that “[t]he Braves had offered Pete Reiser to the Pirates for Wally Westlake, but [Pittsburgh manager Billy] Meyer had turned the offer down cold.”17 Meyer told the press that Westlake “is one of the hardest hitting right handers in the league,”18 and even before his cycle performance, trading him was not a consideration.

After Westlake’s accomplishment of the rare feat, the Globe told its readers that Boston “would probably have to give half the team”19 to land Westlake. The Pittsburgh Press acknowledged that the Braves “definitely lost the last ray of hope of prying Wally Westlake loose from the Bucs.”20

Westlake drove in 104 runs for the Pirates in 1949. He stayed in Pittsburgh until 1951, when he was dealt to the Cardinals on June 15, just over two years to the day after his cycle against Boston.21

1 Skyricesq, “History of Trade Deadlines and a Primer on the New Rules,” July 29, 2019, found online at www.vivaelbirdos.com/2019/7/29/8934384/history-of-trade-deadlines-and-a-primer-on-the-new-rules. Accessed April 2022. According to this site, “The first trade deadline was established by the National League for the 1917 season, and the League chose August 20th as the target date. The American League set their first trade deadline in 1920 and picked a date of July 1st. Both leagues agreed to switch their deadline to August 1st for the 1921 season.” There was much discussion over the next two seasons, before Baseball Commissioner Kenesaw Mountain Landis set the trade deadline for the 1923 season at June 15. That annual date remained in place for over 60 years. An agreement to resolve the players strike in 1985 caused the deadline to change to July 31, beginning with the 1986 season.

3 Left fielder Jeff Heath was a key component to the Braves’ success in 1948. He batted .319 with 20 homers and 76 RBIs. He broke his ankle sliding into home plate  four days before the end of the season. He tried a comeback the next season, but he didn’t make his first start until July 15, and the injury nagged him for much of the season. He played in only 36 games and retired after the season.

6 Hall was born in Swissvale, Pennsylvania, which is nine miles east of Pittsburgh.

7 FitzGerald was charged with a fielding error, rather than a passed ball.

9 Westlake’s hitting streak reached 10 games before he went 0-for-4 against the Philadelphia Phillies on June 20.

11 Henry. The Sun-Telegraph reported that the ejections took place in the seventh inning, while the Boston Globe stated it was the sixth. According to both Retrosheet and Baseball-Reference, Sisti and Rickert entered the game (replacing Stanky and Russell, respectively) in the seventh, which lends credibility to the ejections coming in the seventh.

14 In 1947 the bullpens were moved from foul territory to the base of the left-field wall, and the fence was moved in to enclose them. The area was dubbed Greenberg Gardens after Hank Greenberg, who played the final season of his career for the Pirates in 1947. Greenberg hit 25 home runs in his final campaign, 18 of them coming at home in Forbes Field. Eventually the area was renamed as Kiner’s Korner, in honor of Pirates slugger Ralph Kiner, who led the National League in home runs in his rookie season of 1946 and then led all major leaguers in homers for the next six seasons.

16 Henry. Bonham’s record coming into the game was 0-2. Bonham died at age 36 on September 15, 1949, three months after this game and a week after being diagnosed with intestinal cancer.