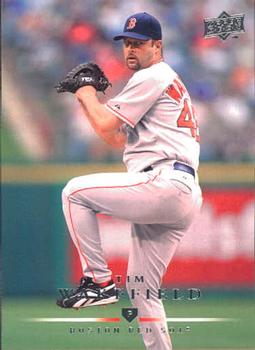 When the Boston Red Sox hosted the Arizona Diamondbacks on June 25, 2008, the pitching matchup featured two starters who had been getting out major-league hitters for a combined 37 seasons … in vastly different ways.

Standing 6-feet-10 and throwing from the left-hand side, Randy Johnson was an intimidating presence, and he often overpowered batters with a fastball that could reach 100 mph. Tim Wakefield, on the other hand, had baffled hitters with his signature knuckleball, which sometimes floated 40 mph slower than Johnson’s fastball.

Johnson (age 44) vs. Wakefield (age 41). The combined age of the two starting pitchers was the oldest in Fenway Park history, and the oldest involving the Red Sox since Leroy “Satchel” Paige came out of a 12-year retirement at age 59, and with the Kansas City Athletics, hosted 29-year-old Bill Monbouquette and the Red Sox on September 26, 1965.1

Heading into the game, both veterans were struggling. Wakefield was 1-4 in his previous eight starts, while Johnson had lost four decisions in a row. But he had gone 7-1 in his previous 10 starts against the Red Sox. Speaking about his counterpart, Wakefield said, “I’m not facing him as a hitter. So, it’s kind of cool.”2

The Red Sox and Diamondbacks led their divisions as the season neared the midway point. Boston’s defending World Series champions were 48-32 (almost identical to their 49-31 record at the same point in 2007) and held a one-game lead over the Tampa Bay Rays in the American League East. Arizona led the Los Angeles Dodgers by four games in the National League West, with a 40-38 record.

Wakefield had faced the Diamondbacks just once before, in a relief appearance on June 8, 2002, walking one, striking out two, and allowing no hits in two innings. Arizona’s radio/television analyst, former knuckleballer Tom Candiotti, threw early batting practice to prepare the team for Wakefield’s knuckler. “I thought he did pretty well,” manager Bob Brenly said.3

Candiotti had faced Wakefield on August 26, 1992, when Wakefield was in his rookie season with the Pittsburgh Pirates. That was the first National League matchup between knuckleball pitchers in 10 years. (The Niekro brothers, Joe and Phil, faced each other on September 13, 1982.) “He was very, very impressive,” Candiotti said at the time, after Wakefield pitched a six-hit shutout in his sixth major-league start. “He looked slow, but he was frustrating people, and that’s the purpose of the pitch.”4

Wakefield took the mound and frustrated the Diamondbacks early, retiring the side in order in the first and second innings, needing only 26 pitches.

Johnson took care of the Red Sox in their half of the first. Second baseman Dustin Pedroia hit a one-out single to left, but Kevin Youkilis flied out and Manny Ramirez popped up to second base for the third out.

The Red Sox got on the board in the bottom of the second. The 2007 World Series MVP, Mike Lowell, led off with a single to center. Coco Crisp followed with a double, advancing Lowell to third. After Kevin Cash flied out, Brandon Moss drove in the game’s first run with a groundout to second. Julio Lugo drew a walk, but Johnson got out of the jam by getting Jacoby Ellsbury on a groundball back to the mound.

Wakefield cruised through the next three innings, allowing just one hit, a one-out single by Miguel Montero in the third inning, and a two-out walk to Chris Young in the fifth. “It was tough,” Young said after the game. “It’s a tough pitch to hit. Guys struggle with it because you don’t really know how to approach it.”5

Boston added a run in the bottom of the sixth. Ramirez struck out to lead things off, but Lowell reached on a single and Crisp followed with a double, his second of the game. Cash was intentionally walked, bringing up Moss. The rookie drove in his second run of the night (without the benefit of a hit) by lofting a sacrifice fly to center field. Johnson struck out Lugo to end the inning, for his fifth and final strikeout of the game. The Red Sox had a 2-0 lead.

Orlando Hudson got Arizona’s first extra-base hit of the night with a one-out double in the seventh, but Wakefield stranded him at second by retiring Conor Jackson and Chad Tracy on just three pitches.

Juan Cruz replaced Johnson on the mound in the bottom of the seventh, and after a two-out double by Youkilis, struck out Ramirez swinging to end the threat.

Manny Delcarmen relieved Wakefield in the eighth, retiring the side in order. Wakefield had given up just two hits and one walk while striking out six. “Wake can pitch. I don’t think that’s ever been questioned,” said Red Sox manager Terry Francona. “He has done that for a long time. Hopefully, it will continue.”6

The Red Sox extended their lead in the bottom of the eighth. Lowell walked to start the inning, and Crisp collected his third double of the night. With two on, Cash launched an unlikely three-run home run to left field. Cruz was replaced by Doug Slaten, who escaped further damage. “He threw me some fastballs inside, but he threw me a slider that caught too much of the plate and I got it,” Cash said. “It felt good to contribute like that.”7

It was Cash’s first home run in more than three years, the last coming on June 21, 2005, off Johnson at Yankee Stadium.8

With a 5-0 lead in the ninth, the Red Sox turned to Craig Hansen to finish the game. But after a leadoff walk to Justin Upton and a two-out single by Hudson, Hansen walked Jackson to load the bases. Francona gave the ball to the closer, Jonathan Papelbon, who struck out Tracy on five pitches to end the game, preserving the shutout.

Crisp’s three doubles equaled the total number of Arizona’s base hits. “Facing one of the greatest pitchers to ever play the game, it’s great to be able to come away with one hit, let alone three,” Crisp said.9

Wakefield had outdueled Johnson on this occasion. “I’ve faced Wakefield enough times when I was with the Yankees,” Johnson said. “I’ve been on the other side of these. I guess what goes around comes around.”10

In the battle of the 40-something starters, it was the youngest player in Boston’s lineup, 24-year-old Brandon Moss, who provided all the offense the Red Sox needed.11

Crisp summed up the night. “Two guys with some great statistics going at it, totally different game, with good numbers. It’s a classic.”12

Johnson pitched one more season after 2008, throwing his final major-league pitch at age 46 and retiring with 303 career wins in 22 seasons. He was inducted into the Baseball Hall of Fame in 2015. Wakefield retired after the 2011 season at age 45 with 200 wins in 19 major-league campaigns.

In addition to the sources mentioned in the Notes, the author consulted Baseball-Reference.com, Retrosheet.org, and SABR.org.

3 Associated Press, “In Battle of Over-40 Hurlers, Wakefield Downs Johnson.”