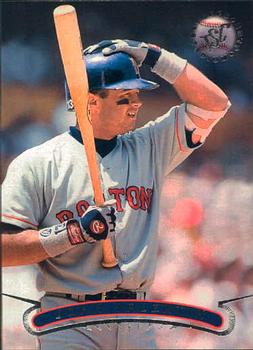 “It’s pretty exciting, but it’s also a pretty freaky thing.”1 That’s what Boston Red Sox shortstop John Valentin said after he hit for the cycle on June 6, 1996, against the Chicago White Sox. His 4-for-4 performance took place in the same game in which teammate Tim Naehring hit into a triple play. Two rare events on the same day, in the same game! What makes this even more freaky is that Valentin is just one of 15 major-league players to ever turn an unassisted triple play.2

Coming into play on June 6, the visiting White Sox were red hot. They were riding a six-game winning streak and had won 15 of 17. Even with their surge, they were still a game behind the equally-hot Cleveland Indians in the American League’s Central Division standings. The home team Red Sox had dropped 10 of their last 15 games and were in fourth place in the East Division standings. Boston Globe staff writer Larry Whiteside sarcastically opened his account of the game with, “Every now and then, the real Red Sox show up. You know, the guys we heard about all spring.”3 Fans were waiting for this team to emerge from their funk and play up to expectations.

Despite Boston’s poor performance to this point in the season, a respectable crowd of 24,382 came to Fenway Park for the night game. Vaughn Eshelman started for the Red Sox. Making his fourth appearance of the season, the second-year left-hander was 0-2 with an ERA of 12.71. Joe Magrane had the starting mound duties for Chicago. The righty had spent eight seasons in the St. Louis Cardinals’ organization, splitting time between the majors and minors. He had been released and signed by three teams since 1993, finally signing with the White Sox shortly before spring training in 1996, and he brought a 1-1 record and 4.91 ERA into the game. Opposing hitters were hitting .304 against him. Against the Red Sox, he delivered another shaky outing.

Eshelman struggled in the top of the first. Tony Phillips walked, and after Robin Ventura flied out, Frank Thomas singled to right, putting runners at the corners. Lyle Mouton lined a single to center, and Phillips scored. Eshelman retired the next two batters to keep the deficit at 1-0, but he had thrown 28 pitches in the opening frame.

The bottom of the first provided even more excitement. Jeff Frye reached on a four-pitch walk by Magrane. On a 1-and-0 count, Valentin blasted a homer over the left-field wall, and the Red Sox led, 2-1. Mo Vaughn worked a full count before walking, and Jose Canseco watched four balls out of the strike zone before he, too, drew a free pass. Naehring swung at the second pitch he saw and hit a sharp grounder to Ventura at third. Ventura stepped on the bag, then threw to second baseman Ray Durham, who turned and fired to Thomas at first, completing the 5-4-3 triple play.

Magrane had thrown just four pitches in the strike zone (counting Valentin’s homer and Naehring’s grounder). After the first four batters reached (three on walks), Magrane had escaped the inning with only two runs allowed. Back in the dugout, Naehring’s teammate Bill Haselman told him, “Thank God they don’t count that for three at-bats.”4 Fans who arrived late to the game might have missed it. It was the first triple play against Boston since July 17, 1990. In that game, the Minnesota Twins turned two triple plays!

Boston wasted a second-inning leadoff single by Mike Stanley when Troy O’Leary grounded into a double play. In the first two innings of the game, two Red Sox swings had resulted in five outs.

In the third with one out, Valentin tripled off of the center-field wall. After Vaughn struck out, Canseco drove Valentin home with a double to left field. Boston added to its lead in the bottom of the fourth when Dwayne Hosey doubled with two down and scored on Frye’s single through the hole between shortstop and third. Valentin also singled, and Frye scored on Vaughn’s line-drive double to right. The Red Sox had built a 5-1 advantage.

Chicago chipped away at the lead, scoring once in the fifth (on a walk and two singles) and twice in the sixth. Chad Kreuter led off the top of the sixth against reliever Jamie Moyer with his second home run of the season.5 Darren Lewis walked with one out, stole second base, and scored on Phillips’ single to center. Suddenly, it was a one-run ballgame. But those were the last runs Chicago would get, and Boston soon resumed its attack.

José Malavé swung at Magrane’s first pitch in the bottom of the sixth and sent the ball over the wall in left. It was his second homer of the season. Chicago manager Terry Bevington left Magrane on the mound. “We definitely had to rest our bullpen,” said the skipper after the game.6

Magrane retired both Hosey and Frye, bringing Valentin to the plate with “everyone in the house knowing what was on his mind.”7

Magrane threw Valentin a first-pitch slider and the right-handed batter swung hard. The ball “whistled into the left field corner,”8 and Valentin easily made it to second base for a double, completing the cycle. In the locker room he told reporters, “I was looking for a good ball to hit, trying to be aggressive, but to be honest with you, I didn’t think I’d ever accomplish this feat.”9 When Vaughn singled to left, plating Valentin, Bevington changed his mind. He called to the bullpen, bringing in Kirk McCaskill in to relieve Magrane, who had allowed runs in four of the six innings he worked.

McCaskill pitched 2⅓ innings of no-hit ball (he did allow two walks) to finish the game for Chicago. The Red Sox used five different pitchers over the game’s final four frames. Joe Hudson replaced Moyer in the sixth, getting Harold Baines to ground out to end the inning, and then pitched a scoreless seventh and walked Phillips with one out in the eighth. Eric Gunderson relieved Hudson to face Ventura. On Gunderson’s wild pitch, Phillips advanced to second base. After Ventura flied out to deep left, Heathcliff Slocumb entered the game to face Frank Thomas with the runner in scoring position. Thomas entered the game batting .336 with 8 RBIs in his last three games.10 Three pitches later, he was back in the dugout, having struck out looking.

Closer Mike Stanton pitched the ninth for Boston and earned his first save. (It was his only save of the season.) However, according to the Globe’s Whiteside, Slocumb deserved an assist for striking out Thomas to end the eighth.11

Boston had ended its three-game skid with the 7-4 victory. Chicago rebounded the next day to defeat the Baltimore Orioles and then won its next three games as well, moving into a tie for first place in the American League.

Valentin became the 19th Red Sox player to hit for the cycle.12 He had entered the game batting .282, with a .419 slugging percentage. Those marks jumped to .294 and .455. Vaughn’s 2-for-3 day pushed his batting average to .369. Valentin and Vaughn, who had been teammates while playing for Seton Hall University, had half of Boston’s 12 hits and combined to drive in four of the seven runs.

Two other players hit for the cycle in 1996. The St. Louis Cardinals’ John Mabry did so on May 18 against the Colorado Rockies, and the New York Mets’ Alex Ochoa cycled on July 3 against the Philadelphia Phillies. Mabry’s feat was a natural cycle: He collected his four different hits in the order of increasing total bases: single, double, triple, and then home run.

Why was this a déjà vu moment? This was only the second time in the history of the major leagues that a batter hit for the cycle in the same game in which a team turned a triple play.13 The other event took place on July 1, 1931, when Philadelphia Phillies left fielder Chuck Klein hit for the cycle. In that same game, Klein’s teammates turned a triple play against the Chicago Cubs.

2 Valentin turned an unassisted triple play on July 8, 1994, against the Seattle Mariners when Marc Newfield sent a liner his way. With the runners moving on the pitch, Valentin caught the liner, stepped on second base to get Mike Blowers and tagged the runner coming from first, Keith Mitchell. As of the beginning of the 2021 season, there have been eight unassisted triple plays turned in the American League and seven turned in the National League. See mlb.com/video/valentin-turns-triple-play-c26377429 for video of the play (have patience with the announcers). Fun fact: this was the debut game for Seattle’s Alex Rodriguez.

13 See retrosheet.org/TriplePlays.htm for a complete list of all triple plays in the major leagues since 1871, the start of the National Association. See mlb.com/news/players-who-hit-for-the-cycle-c265552018 for a complete list of batters who have hit for the cycle in the major leagues since 1882, when the first cycle occurred.