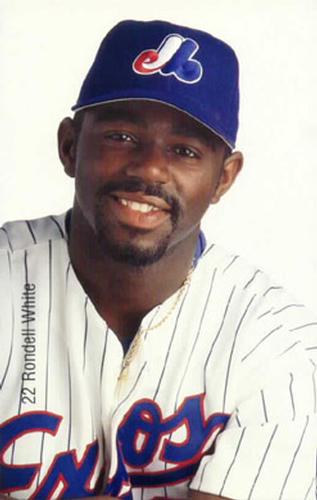 Surrendering 21 hits and making two errors in a nine-inning game is not normally a recipe for success, but that didn’t stop the Montreal Expos from stealing one from the Chicago Cubs on May 14, 2000.1 In a see-saw battle that featured nine lead changes, the Expos clawed back from deficits of 1-0, 6-2, 11-9, and 15-13 to claim an unlikely victory.2 The game also included an unconventional triple play, making it one of wildest contests in the history of both franchises.

The Expos came into the game in third place in the National League East with a respectable 18-16 record. After losing a combined 191 games in the previous two seasons, Montreal’s new owner, Jeffrey Loria, had recently launched a much-ballyhooed turnaround plan. The New York art dealer authorized a significant increase in the team’s payroll – from $16.4 million in 1999 to $33.5 million in 2000.3

One of Loria’s high-priced acquisitions, 31-year-old Hideki Irabu (1-3, 6.88 ERA), got the start for Montreal. Despite Irabu’s disappointing (1997-99) stint with the New York Yankees, Loria persuaded him to waive his no-trade clause by renegotiating his contract.4 After failing in New York, Irabu had his salary bumped to $4.125 million in 2000, making him the highest-paid Expo.5 By comparison, Montreal’s 25-year-old superstar, Vladimir Guerrero, made $3.5 million that season.

The fifth-place Cubs sent 26-year-old right-hander Ismael Valdéz to the hill to face Irabu. Valdéz was making his third start of the season after spending time on the disabled list with shoulder tendinitis. He had gone 0-1 with a 6.52 ERA since returning to action.

It didn’t take long for Irabu to get himself into trouble. The third batter of the game, Sammy Sosa, put the Cubs out front, 1-0, with an RBI single. Then Henry Rodríguez came to the plate with nobody out, Ricky Gutierrez on third, and Sosa on first. The former Expo smacked a grounder down the line to first baseman Lee Stevens, who stepped on first base for the first out and threw to shortstop Orlando Cabrera at second. Sosa ran directly into Cabrera’s tag and was an easy second out. Gutierrez made a delayed break for home, and Cabrera spun around and fired the ball to catcher Chris Widger for the third out, completing an unorthodox 3-6-2 triple play. It was the 10th triple play turned by the Expos since they joined the National League in 1969.6

The Expos grabbed a 2-1 lead in the bottom of the first on a two-run homer by Guerrero.

Montreal’s lead was short-lived. Irabu gave up two runs in the top of the second inning and three more in the third, including a two-run homer by Rodríguez. The Montreal fans serenaded Irabu with boos after he gave up his seventh hit in 2⅓ innings, prompting his removal by manager Felipe Alou. Irabu appeared to mockingly tip his cap to the crowd as he left the field, trailing by a score of 6-2.7

Chicago led 7-4 when Montreal came to bat in the bottom of the fourth inning. The Expos scored five runs in the inning to chase Valdéz from the game. Montreal’s outburst came on an RBI double by Rondell White, a sacrifice fly by Lee Stevens, and a three-run homer by 26-year-old rookie Andy Tracy, which was the first round-tripper of his career. “I thought it was a pretty big point in the game,” recalled Tracy. “But it turned out to be nothing.”8

The Cubs tied the game, 9-9, in the sixth inning, on RBI singles by Sosa and Rodríguez. An inning later, Chicago pulled out in front, 11-9, on Gutierrez’s RBI single and Sosa’s RBI double.

That lead wasn’t safe either, as Montreal rallied for four more runs in the bottom of the eighth. All four markers were charged to Cubs reliever Brian Williams. After José Vidro walked to open the inning, White laced a sharp groundball down the left-field line; the ball was hit so hard that it got stuck in the seam between the pads on the outfield wall for a ground-rule double, preventing Vidro from scoring – but not for long.9 The dangerous Guerrero was walked intentionally to load the bases. Stevens followed with an opposite-field single to drive in Vidro and White, and the game was tied once again. A sacrifice fly by pinch-hitter Wilton Guerrero (Vladimir’s older brother) and an RBI single by Cabrera put the Expos ahead, 13-11.

Alou brought in his new stopper, Dustin Hermanson, to try to close it out in the top of the ninth. Hermanson had been Montreal’s top starting pitcher during the previous two seasons, but he had moved into the closer’s role two nights earlier in place of the injured Ugueth Urbina.10

With runners on the corners, two out, and the Cubs down to their last strike, Sosa stroked an RBI single off Hermanson, cutting the lead to 13-12. The next batter was Rodríguez, who already had three hits and four RBIs in the game. He worked the count to 2-and-2 and again, Chicago was down to its last strike. Hermanson came in with a fastball and Rodríguez jumped on it, launching a three-run home run to right field to put the Cubs ahead, 15-13.11

Cubs manager Don Baylor called upon his 38-year-old closer, Rick Aguilera, in the bottom of the ninth. Aguilera had been struggling of late, posting a 7.36 ERA in his 12 previous appearances. The grizzled veteran was looking for his 296th career save.12

Vidro starting things off with a one-out single. The next batter, White, blasted Aguilera’s 0-and-1 slider for a two-run homer to center field,13 and the game was tied yet again.

Guerrero was the next batter and in typical Vladdy fashion, he lined a pitch at his shoe tops into left field for a single.14 Guerrero injured his lower back making a hard turn around first base, so Terry Jones ran for him. With Stevens at the plate, Aguilera threw over to first base four or five times to check the runner. It made no difference. The speedy Jones easily stole second base on the third pitch to Stevens.15

With first base open and only one out, Baylor had Stevens walked intentionally to set up a potential double play. Mike Mordecai, who came into the game as a defensive replacement in the top of the ninth, was up next. He lined the first pitch from Aguilera into left field and Jones slid home safely with the winning run, giving the Expos a thrilling 16-15 walk-off victory.

Vidro provided an apt summary of the game. “It was ugly, it was exciting, and it turned out to be one of the toughest games I’ve ever played,” he said.16

Montreal’s comeback win was truly historic. The Expos’ offense amassed a Win Probability Added (WPA) of 2.097 (or 209.7 percent) in the game.17 As of the end of the 2020 season, it still stood as the highest offensive WPA (as opposed to pitching WPA) on record for any team in a National or American League game.18 White led all Expos with a 0.749 WPA thanks to his three key extra-base hits.19

Chicago wasted big games from several of its players. Rodríguez (4-for-6, 2 home runs) and Sosa (5-for-6) combined to knock in 12 of the team’s 15 runs, and Rodríguez set a career high with seven RBIs. Eric Young Sr. also stole five bases in the contest, the most by a Cubs/Orphans player since 1901.20 As of the end of the 2020 season, it still stood as the franchise record for the most stolen bases in a game (since 1901).

The Cubs tied a team record for the most runs scored in a game against the Expos. Chicago scored 15 runs versus Montreal on one other occasion – and it lost that game too. On September 24, 1985, Andre Dawson hit three home runs and collected eight RBIs to lead the Expos to a 17-15 victory. As of the end of the 2020 season, the Cubs had never scored more than 15 runs in a game against the Expos/Nationals.

Anyone who witnessed this contest would not be surprised to find out that the 2000 Chicago Cubs had the worst pitching staff in the major leagues, as measured by adjusted ERA (ERA+).21 Aside from a spell of good baseball in July, it was a forgettable season for the Cubs. They finished dead last in the NL Central Division with a 65-97 record.

Although the Expos had 11 different pitchers go on the disabled list by early July, they still managed to play .500 baseball in the first half of the season.22 The most damaging blow came in late June when their best starter, Carl Pavano, was lost for the remainder of the season.23 Eventually the injuries caught up with them. Montreal won only 25 of its last 80 games (.313), finishing a disappointing fourth in NL East with a 67-95 record.

5 Irabu made only 11 starts for the Expos in 2000, going 2-5 with a 7.24 ERA. He missed most of the season with knee and elbow injuries. Another one of Loria’s high-priced acquisitions, Graeme Lloyd, didn’t throw a single pitch for the Expos in 2000 because of injuries. Montreal paid the left-handed reliever a $3 million salary that season. It was ill-advised moves like these that made some Expos fans speculate that Loria was intentionally sabotaging baseball in Montreal.

6 The Expos turned their 11th and final triple play on September 3, 2002, against the Philadelphia Phillies.

10 Urbina led the National League with 41 saves in 1999. His final outing of the 2000 season was on May 6 because of bone chips in his elbow. Hermanson struggled working out of the bullpen. He returned to the starting rotation on June 5, 2000, and he stayed there for the remainder of the season. Hermanson went 2-0 with a 7.84 ERA in eight relief appearances. He recorded four saves in seven opportunities.

13 Greenstein, “Poison Pen Does It Again.”

17 Win Expectancy (WE) or Win Probability (WP) is the percentage chance of a team winning a game at a specific point in that game. It is calculated by comparing the current state of the game to similar situations in historical games. Win Probability Added (WPA) captures the change in Win Expectancy from a plate appearance or baserunning event (i.e., stolen base, caught stealing/pickoff, or balk) and credits or debits the player accordingly. For instance, if a player hit a home run to increase his team’s Win Expectancy from 25 percent to 65 percent, that player would be assessed a WPA of 0.40. WPA is an excellent way of measuring a play’s impact on the outcome of a game. Full play-by-play data is required to calculate WPA. As of May 12, 2021, play-by-play data was available on the Retrosheet.org and Baseball-Reference.com websites for most games dating back to the start of the 1916 season. Current data coverage can be found at https://www.baseball-reference.com/about/coverage.shtml#all_pbp.

18 One of the reasons why the Expos amassed such a high offensive WPA in this game is that they fought back from deficits four times (1-0, 6-2, 11-9, and 15-13). For instance, a team that falls behind 10-0 in the first inning and comes back to win 11-10 would have an offensive WPA that is just under 1.000 (or 100.0 percent). In addition, two of the Expos’ comebacks were in the eighth and ninth innings, which are worth a higher offensive WPA than if those same comebacks had occurred in earlier innings.