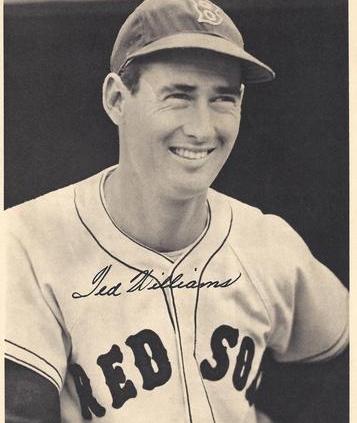 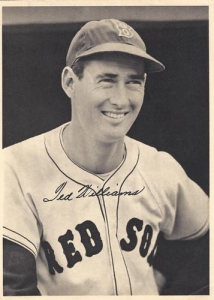 It was looking like a sad Monday for Red Sox fans at Fenway Park. The 1946 pennant winners played a daytime doubleheader, making up a game postponed by rain the previous day. They were hosting the 1945 world champion Detroit Tigers, who had finished second in 1946.

The first game was a heartbreaker of a loss for Boston. The Red Sox had nursed a 2-0 lead from the third inning but gave up single runs in the sixth and eighth to tie the game and lost it, 3-2, in the 12th. Boo Ferriss had gone the distance, but a walk, a stolen base, and then a double by third baseman George Kell did him in. Al Benton won for the Tigers after seven scoreless innings, allowing only three hits, in relief of starter Fred Hutchinson.

Kell singled in the first inning. Shortstop Eddie Lake had struck out before him and right fielder Roy Cullenbine struck out after him. With Detroit left fielder Dick Wakefield at the plate, Kell decided to try to get into scoring position but was thrown out stealing.

Center fielder Dom DiMaggio had been in the starting lineup, but was a last-minute scratch. He had played the first game but a pulled muscle kept him out of the second. Playing third base for Boston, Johnny Pesky singled in the bottom of the first but was erased on a double play. Ted Williams walked but was left stranded.

Wakefield walked to lead off the Tigers second but was left on first.

After two outs in the bottom of the second, shortstop Eddie Pellagrini was hit by a pitch from White. Catcher Roy Partee followed with a single, but Tex Hughson was up next and he struck out.

The Tigers put two runs on the board in the top of the third. After Hughson struck out the first two batters, Lake doubled and Kell singled for a 1-0 lead. Cullenbine then singled, and Kell scored the second run of the inning.

Both Pesky and Williams walked in Boston’s third, but to no avail.

Detroit added a run in the fourth. Williams lost right fielder Pat Mullin’s fly ball in the sun for an error. Center fielder Hoot Evers sacrificed Mullin to second base. After a second out, Bob Swift—the catcher—singled, driving in Mullin. Detroit’s lead was 3-0.

The Red Sox responded in their half of the fourth, scoring twice and pulling back to within a run. Sam Mele, who was playing center field, singled. Partee hit the ball to shortstop, but Lake misplayed it, and both baserunners were safe. Hughson made an out, but Pesky walked, loading the bases.

Wally Moses was playing right field because of Dom DiMaggio’s absence.1 Moses singled, driving in Mele. The bases were still loaded and Ted Williams was up. He walked, forcing in Boston’s second run. First baseman Rudy York made an out to end the inning. The score was 3-2, Tigers.

Neither team scored in the fifth or the sixth.

Swift singled leading off the seventh. Skeeter Webb ran for him, but never scored.

Birdie Tebbetts replaced Swift behind the plate in the bottom of the seventh. The Red Sox were retired in order; Ted Williams batted second and was out on a called third strike.

The Red Sox tied it in the bottom of the eighth. Pellagrini tripled to left field. Partee drove him in on a hit that nicked off Kell’s glove for a single.

The ninth inning thus began with the teams tied, 3-3. Second baseman Eddie Mayo led off with a double off the left-field wall. Tebbetts sacrificed him to third base. Doc Cramer pinch-hit for the pitcher, White. He singled through the box and into center field and Mayo scored with ease. Cramer tried to steal second but was out. Lake made the third out of the inning and the game was placed in the hands of Virgil Trucks, hoping to hold the 4-3 Tigers lead.

He got only one out. Johnny Pesky grounded out, Kell to Cullenbine. Wally Moses got his second hit of the game, a single to center field. Ted Williams came to bat.

Trucks was wary of Williams. The Boston batsman had previously hit three home runs off him, his career homers number 108, 115, and 146.

The first three pitches missed the strike zone. With the count 3-and-0, Williams looked to Cronin, coaching at third base. There was no take sign. Cronin had signaled him to swing if he saw a pitch he liked.

In came the pitch, “a very fast ball right up off Ted’s letters. With those eyes of his, he saw it was good, took his lethal swing and down into the east wind the ball rifled its way into the fifth or sixth row of seats in the deep right field wing of the grandstand.”2

As the author has written elsewhere, “Trucks was trying to avoid giving Williams a fastball to hit, but his first three pitches were off the plate. It was 3-0 and he either had to risk putting the winning run on base or throw one over. He fired a fastball, high and up by the letters, and Ted hit it and it went out—a walkoff, we’d call it today—about five or six rows in the same area depicted by Johnson’s cartoon showing #173—maybe 10 feet further toward the front of Section 2.”3

It was a two-run home run, which converted the 4-3 shortfall into a 5-4 victory. Hughson picked up his second win of the year, squaring his record at 2-2. The 28,280 in attendance were pleased at the turn of events, except those among them who were Detroit Tigers fans. The two games were played efficiently, the first game (the 12-inning game) taking 2:40 but the second one just 1:54.

The Detroit Times noted that Trucks had pitched a total of two-thirds of an inning in his last two appearances and lost both games. He’d started against Philadelphia on May 16 and was pulled after allowing six runs while recording only one out.4

1 Mele had played right and Moses played center in the first game, but they switched positions for the second game. Burt Whitman, “Red Sox Split on Ted’s Merriwell Homer,” Boston Herald, May 20, 1947: 16.

3 Bill Nowlin, 521: The Story of Ted Williams’ Home Runs (Cambridge, Massachusetts: Rounder Books, 2013), 116. The reference “#173” is to the game-winning grand slam, the 173rd home run of his career, that Williams had hit just three days earlier off the St. Louis Browns’ Walter Brown.