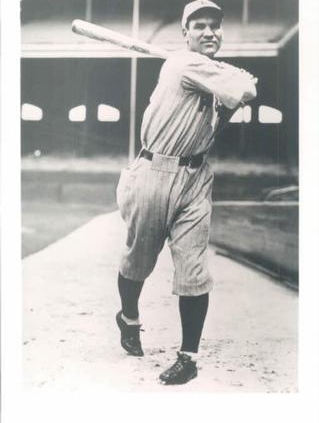 On May 30 — Decoration Day — the Boston Red Sox were playing the reigning world champion Philadelphia Athletics, a team that by the end of the 1931 season won 107 games. The Red Sox were not even a good team. In the preceding nine years, they had finished in last place (eighth place) every single year except one: 1924, when they were next-to-last. And they were in last place coming into May 30, 1931.

Due to rainouts on April 26 and May 25, the Red Sox surrounded the scheduled May 30 doubleheader with twin bills on May 27 and May 31. They were swept by the Washington Senators in the May 27 doubleheader; the Senators beat them again in a single game on May 28. Boston had won only one game of its last 11.

And then they lost the first game of this day’s doubleheader, with Lefty Grove shutting out Boston’s Jack Russell, 5-0. It was an unusual game. Both pitchers threw 11 scoreless innings, but the Athletics broke through with five runs in the top of the 12th. Center fielder Mule Haas drove in the first run with a one-out homer into Braves Field’s1 “jury box.”2 Grove himself knocked in the fifth run with a single that scored Eric McNair. In the 10th, the Red Sox had men on first and second with nobody out, and then the bases loaded with one out, but did not score — though pinch-hitter Otis Miller’s long drive was “caught brilliantly” by Haas, saving the game for Connie Mack and Athletics.3

Mahaffey was involved at the plate in the first four of those runs. In the second inning, Bing Miller hit a one-out double. Eric McNair reached on an error by Red Sox shortstop Hal Rhyne; Miller took third. After a groundout advanced McNair to second (Miller had to hold at third), Mahaffey came up to bat. He hit a groundball that was misplayed by Durham for an error. Both Miler and McNair scored.

In the fourth inning, McNair hit a one-out single but was forced out at second when Joe Boley hit a ball back to Durham. With Boley on base, Mahaffey homered into the left-field bleachers. It was one of four homers he hit in his nine years and 224 games in the majors.

Mule Haas singled to lead off the Philadelphia fifth. Mickey Cochrane and Al Simmons both grounded out. But Jimmie Foxx doubled, and Haas scored, giving Philadelphia a 5-0 lead.

So the score stood until the bottom of the ninth. Relieving Durham, Bob Kline had pitched the eighth and ninth for Boston. It’s not surprising that half of the 25,000 fans — not wanting to see the Sox lose both games of a doubleheader without scoring a single run — had left the park. As noted, the team’s track record for the past decade was one of defeat more than triumph.

The Red Sox had had some scoring opportunities to this point in the game. They had accumulated six base hits and two bases on balls but left all eight men on base. They had not scored a run for 20 innings.

Left fielder Gene Rye was up first in the ninth. He singled to left field, the rookie’s first hit at home. Tom Oliver tripled to the right-field corner, scoring Rye with the first run Red Sox fans had seen all day. Charlie Berry — who later had a 21-year career as a major-league umpire — grounded to shortstop Boley, who threw him out at first base as Oliver scored a second run.

Mack, in his 31st season in the dugout in Philadelphia, went to his bullpen and called in Eddie Rommel — himself later a 22-year American League umpire. Jack Rothrock pinch-hit for Red Sox second baseman Ollie Marquardt and drew a walk. Yet another pinch-hitter came through, when Bill Sweeney (batting for first baseman Al Van Camp) singled to center. That drove in Rhyne and Sweeney took third base. It was a one-run game and the tying run was only 90 feet away from home.

Urbane Pickering stepped into the batter’s box. He took ball one, then ball two. He swung at the third pitch and laced the ball to right field. “The ball was hit squarely on the nose and the Athletic outfielders never made an attempt to field it,” the Boston Globe reported. “… Those of the fans who remained to the finish simply went wild over the flash of the Red Sox in a last ditch fight.”4

Six runs in the bottom of the ninth, overcoming what had been shaping up to be back-to-back 5-0 defeats.

Burt Whitman of the Boston Herald wrote: “It was a game for the book and one that Mack probably never will forget. It should be a good talking point for him whenever his world titles get too cocky and chesty. By the same token it was good tonic for the Red Sox. Shauno can make it the text of a sermon on the value of fighting and hustling to the last moment, and all that sort of thing.”5

As the 1931 season approached its conclusion, the Red Sox appeared headed for yet another last-place finish. But they had another surprise ending in them, a parallel to their ninth-inning resurgence on Decoration Day. A streak of nine wins in 10 games, beginning on September 14, lifted Boston into sixth place in the final standings — just .001 behind the fifth-place St. Louis Browns.

2 The “jury box” was a feature of Braves Field, a section of the bleachers in right field. According to legend, it got its name when a sportswriter covering a weekday game counted just 12 spectators in the section.