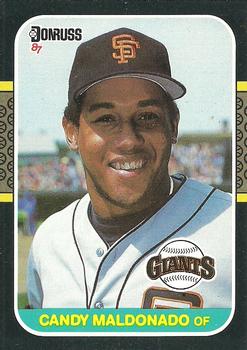 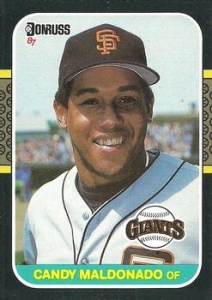 In 1987 Candido “Candy” Maldonado was in his second season with the Giants. After five years with the Dodgers, Maldonado had been traded to rival San Francisco after the 1985 season (for catcher Alex Trevino). Maldonado quickly became the everyday right fielder for the Giants. In 1987 he had arguably his best year in the majors, batting .292 with 20 home runs and 85 runs batted in, and on May 4 of that year, he hit for the cycle against the St. Louis Cardinals.1

The Giants started the season by winning their first five games (and eight of their first 10). They ended April in first place in the National League West, but the Cincinnati Reds were only a half-game behind. After losing two games to Pittsburgh to start the month of May, San Francisco journeyed to St. Louis for another two-game set, now a half-game out of first place. Coming into this game, the Cardinals were sitting atop the NL East, with the Chicago Cubs (winners of three straight) threatening to overtake them for first place.

Veteran Mike Krukow had the starting pitcher duties for San Francisco. He was coming off a two-hit complete-game victory over the Cubs. Opposing him for the home team was fellow right-hander Danny Cox. Cox had allowed 31 hits in 32 innings pitched in the early part of the season, but he had worked to a 3-0 record. A respectable crowd of 22,833 turned out for the Monday evening game at Busch Stadium.

The Giants’ first three batters each reached safely in the opening inning. Mike Aldrete singled and scored on Chili Davis’s double. Jeffrey Leonard singled into the hole at short, but Davis stayed at second. After Maldonado flied out, Chris Brown grounded into a 6-4-3 double play to end the rally.

The Cardinals wasted no time in answering back. Krukow had trouble finding the strike zone and walked Vince Coleman. Ozzie Smith stroked an RBI double into right, tying the game. An out later, Jack Clark drew a walk. Willie McGee then lined a double to right; Smith scored and Clark stopped at third base. A sacrifice fly by Jim Lindeman followed by Rod Booker’s single resulted in two more tallies for St. Louis, which had batted around and led 4-1 after the first inning.

Krukow settled down, facing one above the minimum over the next three innings. Cox, though, was struggling. He allowed two Giants baserunners in each of the second, third, and fourth innings. In the top of the third, Maldonado drove a ball down the right-field line and into the corner. As he neared second base, he was urged by third-base coach Don Zimmer to advance one more, and Maldonado raced to third base with his first triple of the season. From the second inning through the fifth, though, the Giants had a runner at third base but could not score.

However, after two times through the batting order, the Cardinals hitters figured out Krukow. In the home half of the fifth. Terry Pendleton lined a one-out single up the middle. Clark singled to left. McGee grounded a ball to Giants first baseman Aldrete, but he muffed the play and the bases were loaded. Krukow then retired Lindeman on a popout to Aldrete in foul territory, but Booker’s second single of the game led to two unearned runs. The 28-year-old Booker, described by the St. Louis Post-Dispatch as a “career minor leaguer,”2 was playing in only his fifth big-league game.3 With the score 6-1, San Francisco manager Roger Craig made a pitching change, bringing in left-hander Atlee Hammaker to relieve Krukow. Hammaker uncorked a wild pitch, and McGee, who had gone to third base on Booker’s hit, scored easily. This unearned run was also charged to Krukow.

With his team leading 7-2, Cox seemed in control on the mound, despite having yielded nine hits through the first six innings. (In the sixth, the Giants scored an unearned run on two singles and an error.) Then, with one out in the top of the seventh, Maldonado sent a pitch well beyond the left-field wall for his third home run of the season and his first-ever at Busch Stadium. The next day, sports pages across the country described the game and showed an Associated Press photo of Zimmer congratulating Maldonado as he rounded third base. (See photo below.4)

Cox suddenly seemed to lose his composure, “cursing at himself and seemingly yelling at Maldonado.”5 Third baseman Brown stepped into the batter’s box and with his third pitch, Cox threw a fastball that appeared to graze Brown’s shoulder. In fact, the pitch caught him flush on the left side of his face.6 It was later revealed that Brown’s jaw had been fractured. According to Giants skipper Craig, Brown “was coughing up a lot of blood. The inside of his mouth was cut and it might’ve moved some teeth.”7 That was Cox’s final pitch of the game. Pat Perry entered the game in relief of Cox. Perry retired the two batters he faced to end the inning. Newspaper accounts reported that the San Francisco players might not have felt that Cox was trying to hit Brown, but it gave them inspiration when he did.

In the eighth inning, four different St. Louis pitchers tried to quiet the San Francisco bats. With one out, Bob Melvin and Aldrete hit back-to-back singles and then Davis launched a three-run home run over the fence in left-center. Bill Dawley relieved Perry and faced only three batters, yielding a triple to Leonard and singles to Maldonado and Joel Youngblood. Ricky Horton was called in from the bullpen and he gave up a single to Jose Uribe, which plated Maldonado. After Mike Woodard flied out, Cardinals manager Whitey Herzog called for closer Todd Worrell to shut down the Giants. In eight previous appearances, Worrell had notched only three saves, and his earned-run average was 9.95. He retired Matt Williams, but 10 Giants hitters had combined for seven hits and five runs to take the lead, 8-7. For the fourth time in their last five games, the Cardinals bullpen had blown the lead late in the game (in either the eighth or ninth inning).8

In the top of the ninth, with Worrell still on the mound and San Francisco clinging to a one-run advantage, Melvin led off by driving a double into left field. Aldrete sacrificed Melvin to third. Davis followed with a sacrifice fly, scoring Melvin with an insurance run. Leonard stroked a two-out single to center, keeping the inning alive. That brought Maldonado to the plate. He drove a ball into the gap in right-center and raced to second with a stand-up RBI double. After the game, Craig told reporters that “the third-base coach (Don Zimmer) held Maldonado to a double so he could hit for the cycle. A veteran coach will do that.”9 Leonard would have scored whether Maldonado stopped at second or third base.

The Giants had scored nine unanswered runs in the final four frames to beat the Cardinals, 10-7. Dawley, who had faced just three batters, got the loss. Mike LaCoss, who had pitched a one-two-three bottom of the seventh, earned his second win of the season for San Francisco.

Maldonado’s 4-for-6 performance meant that he had indeed hit for the cycle. In the process, he raised his batting average 20 points to .340 and his slugging percentage 70 points to .534. He told reporters, “We have so many good hitters, you never know who’s going to be the hero.”10 Maybe it was Don Zimmer.

Maldonado’s cycle was the second of the 1987 season, coming just five days after Chicago Cubs star Andre Dawson accomplished the rare feat (against the Giants on April 29). Two more batters hit for the cycle in 1987, and they also took place in the National League: Montreal’s Tim Raines (August 16 against the Pittsburgh Pirates) and Atlanta’s Albert Hall (September 23 against the Houston Astros).

The Cardinals and Giants went on to claim their respective division titles and met in the National League Championship Series, with St. Louis winning in seven games. Maldonado batted just .211 with one extra-base hit in the series. Cox pitched two complete games, losing Game Four but winning the clinching Game Seven with an eight-hit shutout. The Cardinals went on to the 1987 World Series but were defeated in seven games by the Minnesota Twins.

For video of Maldonado’s double, which completed the cycle, see mlb.com/video/maldonado-completes-the-cycle-c1874549183.

1 According to mlb.com, Maldonado was also the 20th player in Giants franchise history to hit for the cycle. See https://mlb.com/news/players-who-hit-for-the-cycle-c265552018.

3 Booker was drafted by the Minnesota Twins in 1980 and had been part of the Cardinals minor-league organization since April 1983.

6 According to the St. Louis Post-Dispatch, the ball may have deflected off Brown’s shoulder into his face. See Hummel.

8 The Cardinals fought back to win two of those contests.